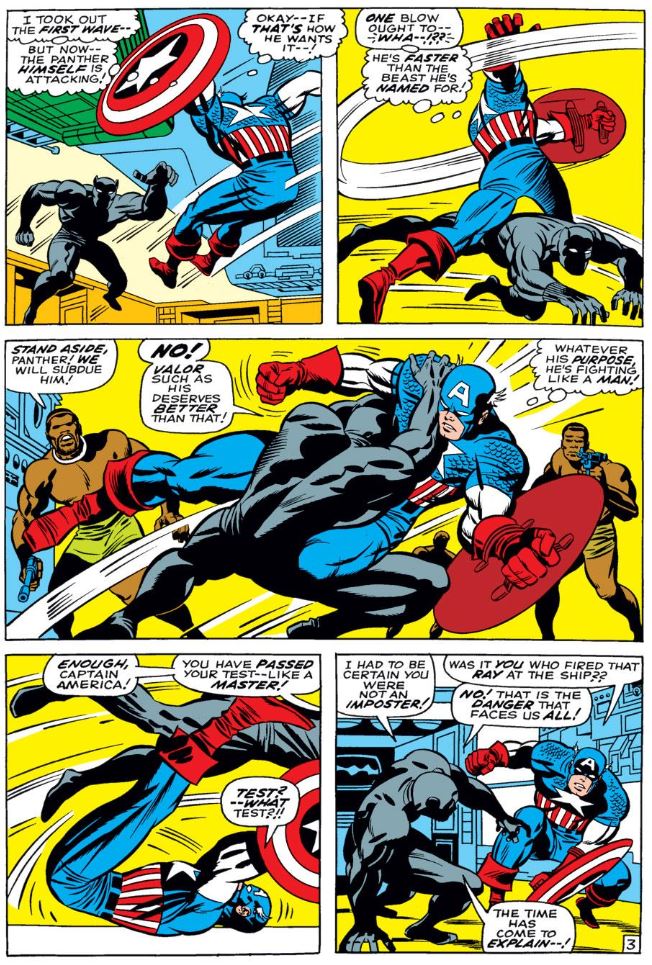 An encounter for the ages! The Protector of Wakanda vs. The Super-Soldier. We present to you, the second encounter in Earth-616 continuity between Captain America and Black Panther!

On the left side, is T’Challa, the King of Wakanda and its Protector as the… Black Panther.

On the right side, is Captain America, the Super-Soldier and the symbol of American freedom.

The winner gets to take down Baron Zemo.

In ‘Captain America #100‘ (1968), Captain America responds to a distress call from T’Challa boarding a ship. He lands in Wakanda and is immediately attacked by the Black Panther and his men.

A battle ensues where each combatant tests each other’s strengths.

It turns out that the fight is actually a test! Black Panther explains he recruited Captain America due to a threat: “destructive heat rays from an orbiting satellite that Wakandan rockets have failed to destroy.” The two heroes take off to investigate.

The issue marked the first appearance of Black Panther outside the ‘Fantastic Four’ series and leads to Black Panther joining the Avengers afterwards in Avengers #51 (1968).

CHECK OUT THE ACTION: HAWKMAN VS. BLACK ADAM

Vote below! The results of the votes will be posted on September 25th 2020.

8 thoughts on “Battles Of The Week: Black Panther vs. Captain America”