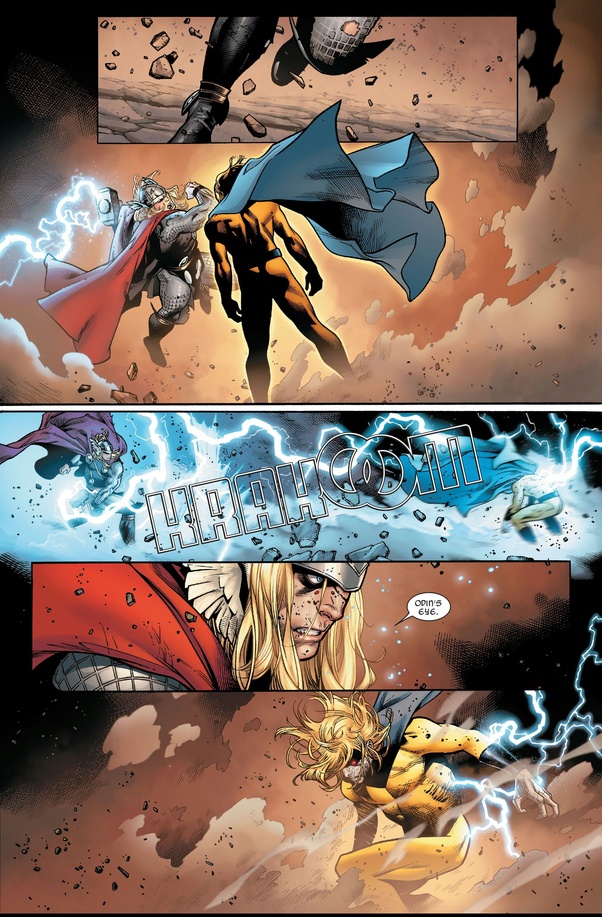 In an attempt to extend his power, Norman Osborn calls a meeting of the Cabal. He explains he intends to conquer Asgard despite opposite by a Doctor Doom.

Orchestrating events, a superhero intervention by Volstagg leads to a battle with the U-Foes. Then, it results in an explosion at a sold-out football game and the death of everyone, except Volstagg.

Without presidential sanction, the Dark Avengers begin a siege of Asgard. To complicate matters, the Sentry has returned and he is unstable.

By fan-vote, Thor vs Void Sentry is published in Battles Of The Week.

On the left side is Thor, the God of Thunder. On the right side is Void Sentry, The Angel of Death.

CHECK OUT THE ACTION: CAPTAIN MARVEL VS THOR.

The battle to decide who is the cosmic god!

How does the fight go?

What a battle! In the battle of the cosmic gods, Thor showed unrelenting power… to the death!

THE SENTRY IN COMICS

NEXT BATTLE OF THE WEEK: SILVER SURFER VS DRAX THE DESTROYER. SEPTEMBER 16TH.

ARE YOU A MARVEL FAN? A DC HERO? SUBSCRIBE TO MY NEWSLETTER!

Subscribe to our newsletter to get the latest news on stories in Marvel and DC comics, upcoming series and articles published on Database Comics. Head over here.

9 thoughts on “Battles Of The Week: Thor vs Void Sentry”