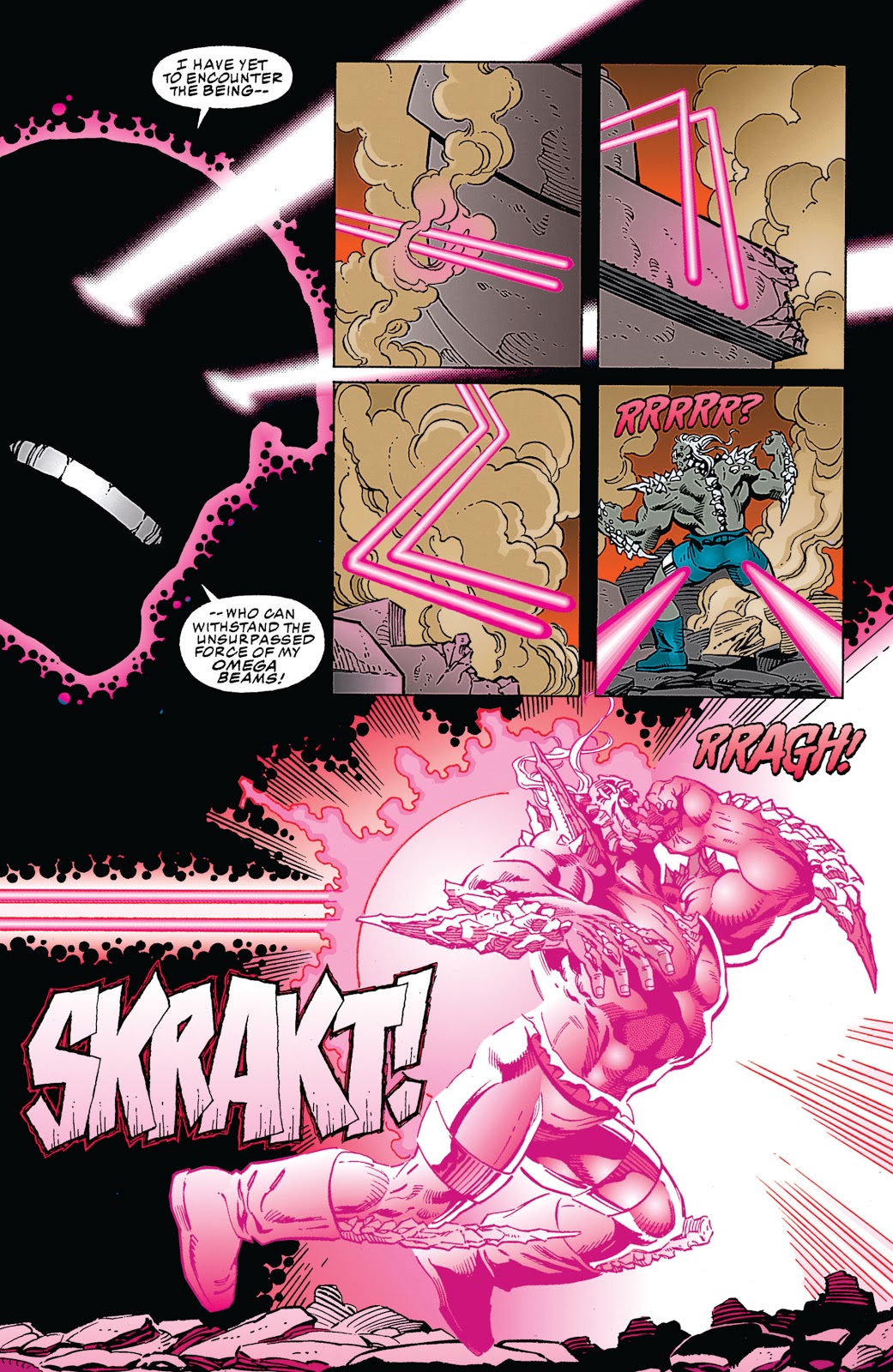 Today, we talk about a destructive super power. I speak of the Omega Effect.

On October 12th, we had Metropolis Battles: Doomsday vs Darkseid. Darkseid actually kills Doomsday “with the unsurpassed force of my Omega Beams.”1 A question that has intrigued fans for some time, is to determine the Power Level of the Omega Effect.

What is the destructive super power called the Omega Effect?

The Omega Effect is a strange force of entropy, perhaps a destructive side to the often creative nature of the Source.

It is Darkseid‘s possession of the Omega Effect that allows him to fire his Omega Beams from his eyes. These beams are capable of vaporizing, erasing, as energy blasts/energy beams or transmuting any form of matter, living or non-living. They can send/retrieve something from different places, times, dimensions, and even universes.

Darkseid uses his Omega Beam to send Batman back in time at the climax of Final Crisis. From there Batman had to journey through time in order to get back home to his own time period.

It is practically impossible to avoid, dodge or deflect Darkseid’s Omega Beams, as the beams are able to make sharp turns around obstacles and few can withstand a direct hit from them.

In ‘Superman/Doomsday: Hunter Prey’ (1994) #1, Doomsday resurrects then guided by Cyborg Superman, lands on Apokolips. There, a brutal confrontation between Darkseid, the God of Evil, and Doomsday, the Ultimate, follows. Darkseid states in the issue, that he can equal Doomsday’s power. If Darkseid can equal Doomsday’s power then he used the full power of the Omega Effect. During the battle, Darkseid uses the destructive super power to kill Doomsday. However, Doomsday comes back from death and evolves beyond the attack. At the end of the battle, as Doomsday defeats Darkseid, Darkseid says that Doomsday is a being of legend, citing the fear he creates.

In ‘Superman/Doomsday: Hunter Prey #3’ (1994), Doomsday and Superman survive an explosion “equal to a million nuclear blasts!”2 This durability feat is Stellar in Power Level and we used it to rate a similar feat.

Since Superman is unable to defeat Doomsday with the help of Mother Box and Waverider, he takes Doomsday to the end of time where the universe is ravaged by the forces of entropy. Doomsday’s destruction ends there. This indicates that Doomsday’s durability is Universal.

As a result, since the Omega Effect succeeded in killing Doomsday once, it is Universal in Power Level. The destructive super power is capable at full power of destroying even the Ultimate. However, Doomsday comes back and evolves from the attack. At the end of time, there is nothing that Doomsday can come back to since the universe is ravaged by the forces of entropy. As Doomsday keeps coming back to an entropic universe, he cannot evolve from entropy, he eventually dies.

10 thoughts on “Super Power Explained: Is The Omega Effect, Universal Or Multiversal In Power Level?”