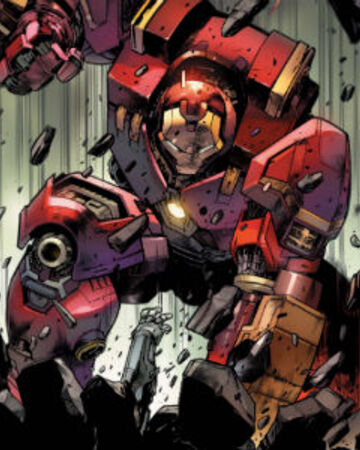 THE HULKBUSTER ARMOR IS DESIGNED TO TAKE ON HULK

The Hulkbuster Armor was built by Iron Man in case he had to take on the Hulk. There have been multiple variations of the Armor. Let’s look at them.

The armor was a modular component system, instead of a suit. In fact, it was an exo-suit, that assembled around Iron Man’s armor. The Hulkbuster exo-suit was used when Hulk confronted Iron Man over his production of gamma bombs at Stane International. They met at a Stark plant.

One of the five armors that was activated by remote trigger when the son of Ho Yinsen was killed by S.H.I.E.L.D. The armor attacked Times Square. The Avengers attempted to take the armor down but could not succeed. Realizing it was triggered by his consciousness, Iron Man blasted himself with repulsors to take it down.

Iron Man used this armor to battle the Hulk which was a very brutal fight. It was heavily damaged by the collapse of Stark Tower; its remains were briefly possessed by the extradimensional demon named Zom. It was subsequently deactivated and was presumably salvaged by Stark Industries or S.H.I.E.L.D. later.

When Tony Stark undertook his reformed company Stark Resilient, a model of this armor was dismantled and melted.

When the Extremis virus was re-created by A.I.M. and sold around the world, Iron Man decided to hunt it down and destroy all the samples by any means.

Iron Man located one of the sample to a French catacomb where 13 superhumans were being created. Iron Man created the Heavy Duty armor in order to take down the superpowered individuals at the same time.

Later, Iron Man faced Hulk with the Heavy Duty Hulkbuster armor. Though Iron Man used all his arsenal, he was not successful and Hulk turned it into scrap.

The Hulkbuster Armor was next used by Iron Man when Captain Marvel rallied the Avengers to capture Bruce Banner. Due to his possession by the One Below All, the Hulk managed to easily overpower the team. The Hulkbuster’s repulsor beams had little effect on the Hulk, and the armor suffered critical manage with a single blow. After the Hulk tore off the armor’s arms, the suit suffered a cascading failure. Tony had to use the armor’s manual release to activate its ejection system. As soon as Tony ejected out of the armor using its detached helmet for propulsion, the armor exploded.