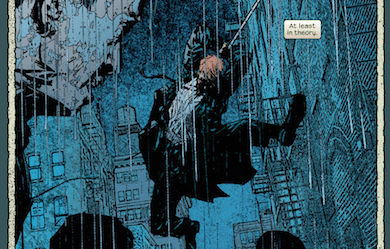 Among Marvel’s street-levelers, Daredevil figures at the top of its best martial artists. In one of his most notorious feats, the Man Without Fear defeats 107 Yakuza men. After Daredevil has claimed the title of Kingpin of Hell’s Kitchen, the West Coast underworld puts him on notice.

In Daredevil (2004) #57, the Japanese mafia challenges Matt Murdock to a fight to the death. Incredibly, the fight concludes in under three minutes. Near the end of the fight, the FBI intervenes.

Really, the feat has been mentioned as one of Daredevil’s best fights. Importantly, the Man Without Fear showcased a Metahuman-Level of Fighting Skills. According to our Fighting Skills Scale, a Metahuman Warrior can defeat over a 100 men in armed or unarmed combat.

Radioactively Enhanced Physiology: Murdock was originally enhanced by the radioactive isotope which later blinded him. As a result, he possesses superhuman senses, agility, reflexes, balance, and etc. Murdock’s nervous system has also increase some of his abilities at peak human level.

Peak Human Speed: Similar to his strength, Matt can increase his speed to peak human level.

He is capable of sprinting two city blocks in seconds, disappearing, hitting a sniper with his billy club, and crosses a large distance while getting into costume in seconds. Matt’s running speed is also above an Olympic-level athletes speed, such as a track and field sprinter/decathlete.

Among Daredevil’s most famous super powers is his Radar Sense.

Enhanced Stamina: Matt’s stamina is similarly enhanced, since he was able to hold his breath underwater for longer periods of time.

Radar Sense: A form of echolocation via low radio wave projection, according to one theory; an energy wave within certain portions of the electromagnetic spectrum. The signal emanates radio waves from regions of his brain, after which it travels outward, bounces off objects around him, and returns to receiving regions of his brain.

With this ability, Murdock can synthesize a very close analogue of three-dimensional three hundred and sixty degree human sight.

A FAN OF DAREDEVIL? CLICK ON DAREDEVIL VOL. 9: KING OF HELL’S KiTChEN BELOW TO BUY the KINDLE & COMIXOLOGY comic.

WHAT IS DAREDEVIL’S REACTION TIME?

During the Yakuza fight, Matt Murdock defeated 100 men in under three minutes. If we divide the time by the number of men, we obtain a reaction time of 1.8 second per man.

In fact, Daredevil may have an even faster reaction time since he is able to dodge gunfire at point-blank range.

Superhuman Reflexes: Possibly due to his exposure to the radioactive waste that caused his blindness, Matt’s reflexes borderline superhuman. And his reaction time is in the order of magnitude of the microsecond.

Without a doubt, Daredevil is among Marvel’s best martial artists.

WHY DAREDEVIL CAN DEFEAT A METAHUMAN

Generally, Daredevil’s enhanced sensory system, radar sense and superior speed give him a significant advantage in battles. Even against metahumans, Daredevil is able to amp his Olympic level super strength to peak human levels.

Importantly, his radar sense gives him the advantage of not relying solely on physical senses. Instead, he is able to rely on his martial arts skills and his muscle memory.

In practice, Daredevil can dodge gunfire, outmaneuver an attack or even evade Electro’s electric blasts. Relevantly, electricity travels from 3*106 meters per second to up to 90 percent of the speed of light.

Definitely, Daredevil’s enhanced speed is the result of a Metahuman Level of Fighting Skills.

HOW STRONG IS DAREDEVIL?

Peak Human Strength: Thanks to his control over his central nervous system due to his many years of martial arts training, Matt can increase his strength to peak human level.

In Daredevil (1982) #179, the Man Without Fear performs a scaling feat. In a gym, he lifts a 400 pound barbell and uses it as a weapon against henchmen. Then, he throws it at Winston Cherryh 10 feet away, a mayoral candidate with ties to the Kingpin.

Really, by our calculations, Daredevil produced 553 Newtons of force for an Olympic athlete level of super strength. Definitely, Daredevil is capable of amping his strength to Peak Human level with martial arts and training.

Did you like the SUPER POWER ARTICLE? PLEASE RATE THE ARTICLE OR SHARE WITH FRIENDS AND FOLLOWERS.