Shopping for graduation gifts to entertain The Kid Superhero in real life? To #collectabattle, click on Titans (2008-2011) #12 to buy on Amazon. Visit our product review to find why the Modern Age comic is one of the best Titans stories.

SYNOPSIS FOR “DEATHTRAP (PART I)”

The Titans are on the hunt for a traitor. In order to find him, they must draw out Vigilante.

In order to lure him, a mind-controlled Cyborg baits a fight with the Titans and particularly, Beast Boy.

Enter the contestants. On the left side is Beast Boy and on the right side is Cyborg.

In order to lure Vigilante, Cyborg stages a fight with the Teen Titans. During the fight, he fights Beast Boy.

The battle to decide who is the strongest Titan!

‘DC Comics Presents’ (1980) #26, titled “Where Nightmares Begin”, marks the first appearance of Cyborg in DC continuity. Robin arrives on the scene of a terrorist siege at S.T.A.R. Labs. Before Robin can act, his future teammates Cyborg, Raven and Starfire appear to him in a vision at Titans Tower. At the end of the issue, it is revealed Raven gave Robin a vision of the future.

The issue was created by Jim Starlin and Marv Wolfman. 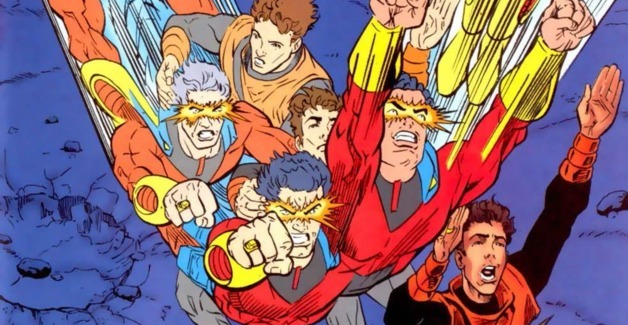 Shopping for graduation gifts to entertain The Kid Superhero in real life? To #collectabattle, click on the Amazon product image below to purchase Legion of Super-Heroes (1989-2000) #111. Visit our review to find our recommendation for the comic.

SYNOPSIS FOR “THE POWER OF ONE”

Previously, Shazam was infected by the Batman Who Laughs. Now King Shazam, he invades Black Adam’s kingdom. Indeed, he plans to set it as his personal playground.

Enter the contestants in Kahndaq. On the left side is King Shazam, and on the right side is Black Adam.

King Shazam is possessed by The Batman Who Laughs. He comes to Kandhaq to conquer. Brutally, Black Adam engages him in a clash.

The battle to decide who is the mage!

A FAN OF SHAZAM AND DC COMICS? SUBSCRIBE TO OUR NEWSLETTER TO RECEIVE THE LATEST POSTS ON YOUR FAVORITE HEROES.

NEXT BATTLE OF THE WEEK: QUICKSILVER VS HIGH EVOLUTIONARY. NOVEMBER 16TH.