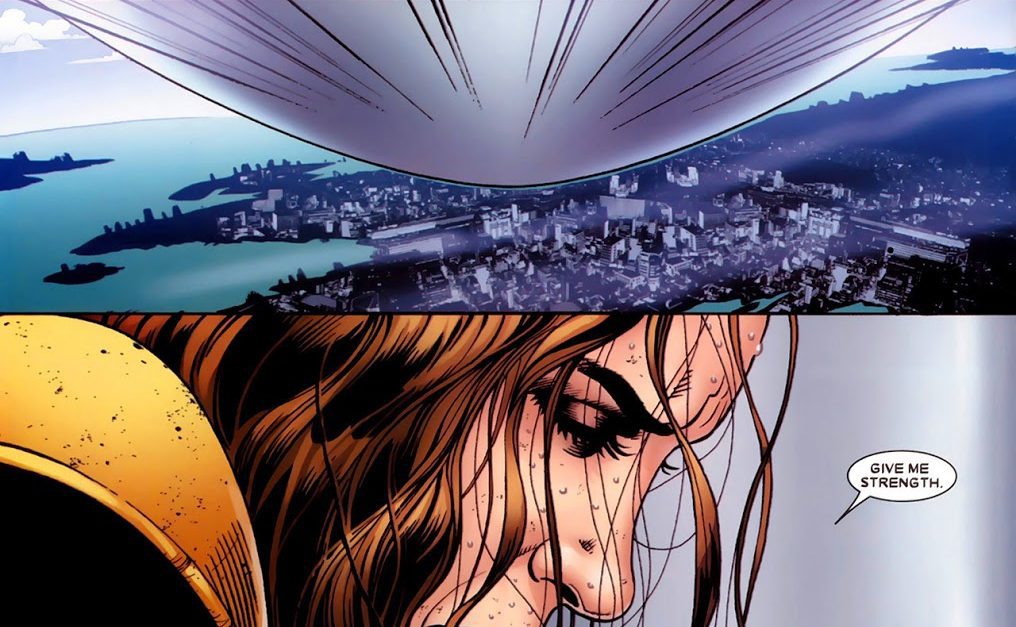 AT HER PEAK, SHADOWCAT CAN PHASE AN INTER-PLANETARY BULLET THROUGH EARTH

To begin, Shadowcat has often been the most disrespected member of the X-Men. Indeed, her mutant super power allows her to phase through solid objects. Nonetheless, her bashfulness, youth and fear have often caused her some issues. But all that changed.

In one remarkable story, Kitty Pryde is called upon to save the Earth from impending doom. Particularly, the X-Men are on a mission to Breakworld to prevent the destruction of Earth. On Breakworld, the planet is governed according to prophecies viewed on “timeshadows.”1

Violently, the planet had been at constant war. In order to investigate the prophecy of a mutant that would cause the end of Breakworld, the X-Men travel there. As it turns out, the prophecy referred to Colossus.

When Powerlord Kruun activated Retaliator from their orbiting moon, the 10-mile bullet was fired on a collision course with Earth-616. Immediately, Shadowcat phased through the bullet attempting to alter its navigation systems.

However, with no navigation systems inside, Kitty was forced to use her mutant powers. Meanwhile, the X-Men and Earth’s heroes banded together to avert the cataclysm. However, the bullet’s magic was too powerful providing them with fantasies about victories.

Finally, summoning all her might, Shadowcat phased the bullet all the way through Earth. In the end, she seemed permanently merged with the bullet in space where she stayed for a duration of two years.

Really, when we rate this feat, Kitty’s energy projection required her to phase a 10-mile bullet traveling at stellar speed.

In fact, in the comic, we get the information that the bullet had a gravitational slingshot around Desirius-Beta, which is 8.6 light years or 8.136*1016 meters away from Earth.

At eight minutes from a collision with Earth, the bullet was traveling Faster-Than-Light at 1.695*1014 m/s. Overall, the kinetic energy of the bullet was at least 2.87*1028 Joules. In order words, Shadowcat had to perform a Stellar-Level of Energy Projection.

Now, let’s answer the user’s question by looking at how Kitty’s powers work when phased.

A GHOST, KITTY WOULD NOT NEED TO EAT NOR BREATHE WHEN PHASED

In Kitty Pryde and Wolverine (1985) #5, Kitty Pryde becomes Shadowcat for the first time. To this end, she travels to Tokyo in order to warn Heiji Shigematsu to stop threatening her father.

During the issue, Kitty displays her famous ability to walk on air. Though the physics of this super power are unclear, basically, Kitty is able to become less dense than air. At the same time, she phases all her atoms through the air molecules.

Theoretically, being less dense than air would enable to not need to breathe. However, it should be noted that it is a mental or psionic process in the case of Kitty that requires concentration.

For the comic, click on the Amazon product image below to purchase the Paperback.

In many respects, an indication of Kitty’s phasing powers, is her ability to disrupt circuitry and electrical systems. In Uncanny X-Men (1999) #367, Kitty Pryde and the X-Men are fighting the Magneto War.

Namely, Magneto with his Acolytes have unleashed an EMP over the Earth. To this end, he demands that the UN cede land for a mutant sanctuary. Against Magneto are the X-Men. During the battle, Shadowcat disrupts the Acolytes’ Gravimetric Pulse ship’s electrical systems.

In some sense, Shadowcat’s psionic powers are purely physical. It appears phasing her atoms between the atoms of solid objects, allows her to disrupt the force of electromagnetism.

Likely, she affects the directional movement of electrically charged particles – these include protons and electrons – necessary to create a current.

In some respects, Shadowcat affects matter at the atomic level by disrupting electromagnetic and electrical forces. This seems to indicate that in a phased state, her mind and body supply electrical energy.

And the average human produces 100 watts at rest, which is less than 10 percent of the 1250 W that a house consumes every hour. Definitely, this is a Peak Human-Level feat.

1. IN THE PERMANENT PHASED STATE, SHADOWCAT DOES NOT NEED TO EAT

After the Breakworld bullet, Kitty Pryde remained in space for an extended period of time. Furthermore, she stayed without need for food.

In theory, the ability to phase through solid objects and to walk on air, would preclude the need for air and food. Indeed, in a phased state, Kitty’s body is either fully or partially intangible.

At the same time, the loss of the need for air means there would be no biochemistry involved, since oxygen is needed to carry out the living reactions of the body. As such, Shadowcat would not need food. In effect, in her phased state she is a ghost.