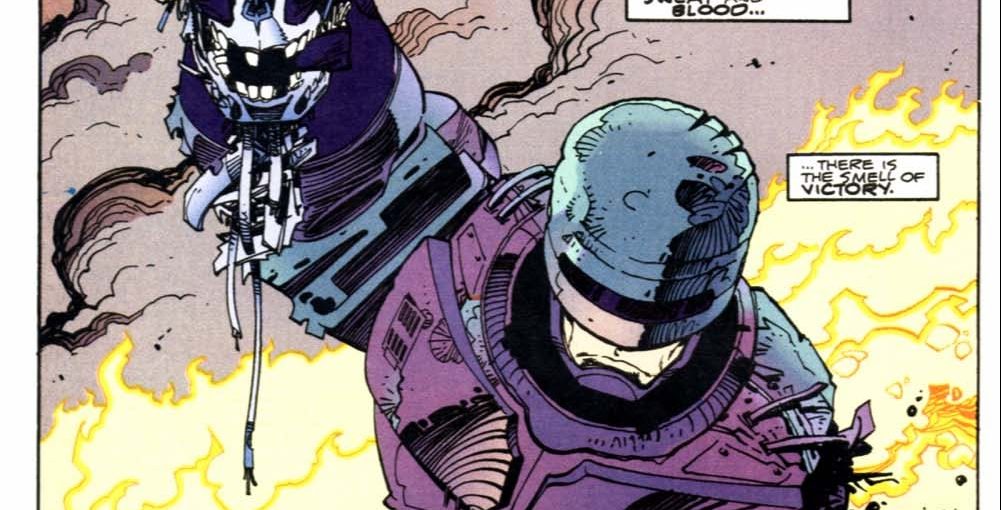 For the issue, click on the Amazon product image below to purchase the Kindle or Comixology comic.

By now, we’ve all seen the original “Robocop” released in 1987. Indeed, it was the movie that marked the decade characterized by other popular movies such as “The Terminator.”

Let’s delve into why Robocop is one of the most avant-garde cyberpunk concepts from the 80s.

To begin, “Robocop” (1987) is about the police force. Particularly, it is about a Detroit police officer named Alex J. Murphy. Tragically, he is killed in the line of duty by a vicious crime gang. Ingeniously, a company called Omni Consumer Products transforms the fallen hero into a cyborg. Then, he becomes… Robocop.

HALF MAN, HALF MACHINE

Properly speaking, “Robocop” (1987) is an experiment. To this end, let’s test the boundaries between human life and machine programming. In many respects, the cyberpunk culture has produced here a cult film. In fact, the success of “Robocop” is revolutionary in itself. Indeed, it opened the general public’s minds to the possibility of cyborgs, robots and artificial intelligence.

Certainly, Robocop is half man, half machine. Science fiction plays with the limits of reality. Here, logic is bent when a human brain is put inside a machine. Without a doubt, it is the birth of a cyborg. What makes Robocop stand out is the fact he is also a police officer. His commitment to upholding the law is unquestionable though his methods are deemed too violent.

Perhaps, the most distinctive element of “Robocop” and its comic adaptations, is its hyper violence. Of course, Hollywood has made it a defined formula to use violence to counter social mores. In fact, this is what is viewed as social progress. What makes Robocop succeed is that lethal violence is served in the cool, logical voice of a machine. But, at the service of the law.

In this regard, much ink has been spilled about violence in Hollywood movies. For some reason, it seems the general public responds positively to artistic works that breathe authentic counter-culture. To this end, cyberpunk seized the imagination of the crowds in the 80s. Indeed, the hyper violence in “Robocop” made for entertainment not seen before on movie screens. And novelty, is the order of the day.

CHECK OUT THE STORY: Why Doctor Doom Is Marvel’s Greatest Villain

FRANK MILLER GAVE THE FANS WHAT THEY WANTED

Using elements from both the RoboCop and Terminator universes, the comic book series puts its own spin on proceedings by having Skynet send three Terminators back in time to Detroit to protect a burnt out RoboCop from a lone human soldier (also) sent back to destroy him.

Discovering that the technology used to build him is partly responsible for the future development of Skynet, RoboCop soon sets upon himself to take down Skynet in the post-apocalyptic future single-handedly. Part of the story focuses on his mind, the only part left of him, hiding and moving throughout Skynet’s systems, fighting back as best he can.

-“RoboCop Versus The Terminator,” ROBOCOP WIKI

NEXT: ROBOCOP VS THE TERMINATOR. NOVEMBER 3RD.