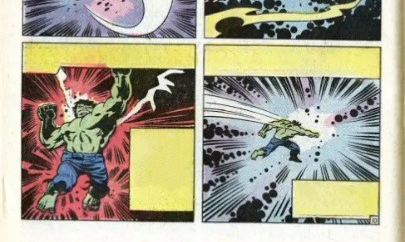 In 1962, Marvel comics features its historic first crossover between its characters. In Fantastic Four (1962) #12, the Hulk meets Thing and the Fantastic Four for the first time! In a clash of titans, Thing and Hulk battle to save Rick Jones who was kidnapped by the Wrecker.

In fact, since the 1960s, Thing and Hulk have been rivals and celebrated as equals. However, the Hulk-Thing rivalry changed over time, when it became clear that Hulk is a force of nature that dominates most fights, but Thing has a brave heart that will not back down.

Though in the 1980s, mutations in Thing’s abilities and the transformation into Grey Hulk favored Thing. In Fantastic Four (1988) #320, Doctor Doom manipulates the two monsters into fighting against each other. Incredibly, Thing defeats Hulk.

Let’s look at how Thing’s and Hulk’s super strengths match against each other across various media.

TV: THING MATCHES A HULK WITH MEMORY LOSS IN SUPER-STRENGTH

From 2013 to 2019, Marvel ran five seasons of Avengers Assemble (2019) on Disney XD. Importantly, the long-running show has been celebrated as one of the best Marvel cartoons. And it is well deserved. It featured important story arcs every season about the Avengers, even ending with a Black Panther story arc in season five.

Perhaps, the best Hulk moment of Season 1 was Hulk’s Day Out. In the episode, Hulk crashes to Earth with a message of doom. Importantly, Hulk has a memory loss and the Avengers must reconstruct his last 24 hours.

In a brief fight, it appears both fighters in the strength and durability departments are evenly matched. Really, their strength is so evenly matched that they lock arms and Captain America must use his shield to separate them.

In the end, the scuffle is a tie.

Really, Fantastic Four: The World’s Greatest Heroes (2006) attempted to change the FF status quo. Though the series ran for only eight episodes from 2006 to 2007, ScreenRant commended its strong tone and eccentricity.

Particularly, episode 4 featured a powerful battle between the Fantastic Four and the Hulk. True to the comics, Thing appeared as the more skilled fighter though Hulk showed superior brute force.

Initially, both fighters are matched. However, Hulk actually becomes more savage by smashing Thing with cars and finally stomping him with Thing lifting a car above his head. At the same time, Invisible Woman and Human Torch have to step in in order to help.

In the end, with a trick taken from the comic, Mister Fantastic defeats Hulk with an ultrasonic device that reverts him to Bruce Banner.

POPULAR SCIENCE FAN CELEBRATING WORLD INCREDIBLE HULK DAY AT THE MOVIE THEATER IN DENTON TO ENTERTAIN YOURSELF ABOUT #THEMOSTPOWERFULHERO? CLICK ON INCREDIBLE HULK #135 “PHANTOM EAGLE & KANG THE CONQUEROR APPEARANCE BELOW TO #CELEBRATECOMICCON AND BUY THE COMIC.

Though Fantastic Four: Rise of The Silver Surfer (2007) received mixed reviews from critics and audiences, the general consensus is that it was superhero spectacle with a convoluted plot and insufficient characterization for its villains.

Perhaps, one of its least celebrated moments is the London Eye scene towards the beginning of the movie. Early on, Mister Fantastic is able to calculate the Silver Surfer‘s next cosmic phenomenon on Earth. Then, the Fantastic Four are off to London.

When a crater forms in the River Cruise, London is threatened and the FF must save the London Eye: While Thing supports the London Eye, Invisible Woman prevents people from falling and Mister Fantastic anchors it.

Importantly, the London Eye weighs 2100 tons. Over nine feet in the air, Thing generated 185409000 Joules of potential energy, for a City-Block Level feat.

FILM: HULK CAN STOP THE LEVIATHAN WITH A PUNCH

Really, Marvel’s The Avengers (2012) sports some of the best cinematic action. Perhaps, the movie is the best superhero movie of all-time. And it is well deserved.

In the final battle, the Avengers finally assemble in order to face Loki and the Chitauri invasion in New York City. When the situation seems hopeless, Hulk saves the day!

Certainly, Hulk’s Leviathan Punch is one of the greatest cinematic moments. In order to stop the three million tons monster travelling at the speed of sound, Bruce Banner changes into the Hulk instantly delivering a titanic punch that stops the monster in its tracks. Then, Iron Man blows it with a missile.

Visit Super Power Explained: 5 Feats That Show The Thing Can Bust A Planet for the explanation of Thing’s Planetary-Level feats.

COMIC: HULK CAN PUNCH THROUGH TIME

For the most part, Hulk has gone through different incarnations over the comic book ages. During the Bronze Age, Hulk was in top form. Though his power regularly fluctuated, the Jade Giant seemed to have higher peaks.