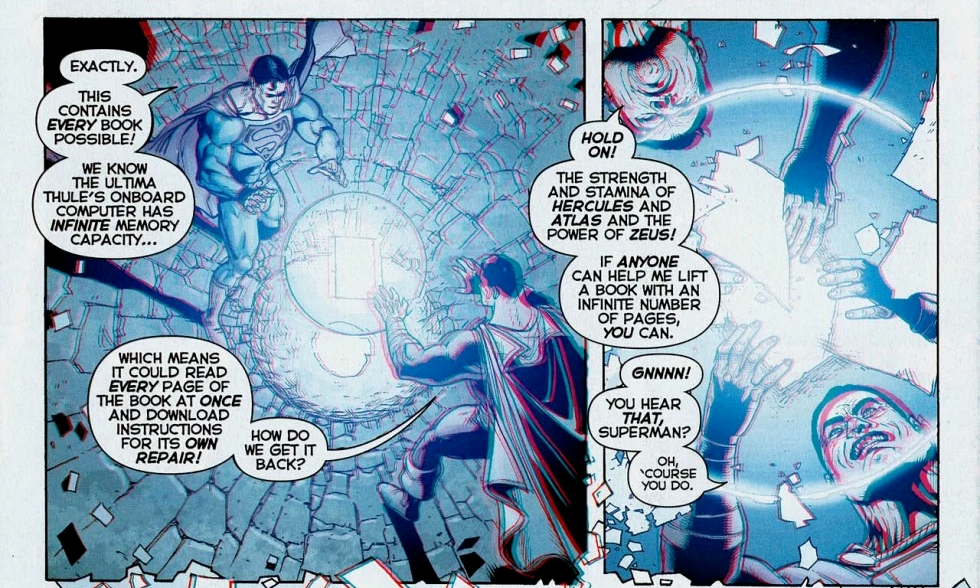 *In anticipation of Shazam: Fury Of The Gods we publish this article on DC’s top two heroes.

In 2009, Final Crisis closed one of DC’s most ambitious crossover event in years. During one of the multiverse’s most dramatic crises, the Supermen of the Multiverse were recruited to save it from impending annihilation by the vampire god Mandrakk. Importantly, Captain Marvel led in the final assault on the Dark monitor and Ultraman, with Superman as the witness.

In fact, since the 1930s, Superman and Captain Marvel have been rivals and celebrated as equals. From rivals Detective Comics and Fawcett Comics, their rivalry became a sensation when DC Comics acquired the rights to Captain Marvel in 1973.

In one of DC Comics’ darkest crises, Monitrix Zillo Valla recruits these two legendary superheroes and the Supermen of the multiverse to fight the ultimate enemy: Dark Monitor who feeds on the stories of the DC multiverse! It’s up to these two heroes to find the Ultramenstruum and save the DC multiverse.

Let’s look at how Superman’s super powers and Captain Marvel’s power of SHAZAM match against each other across various media.

TV: IN THE JLU EPISODE CLASH SUPERMAN IS THE BETTER FIGHTER

From 2004 to 2006, Warner Bros. Animation ran seasons 1 to 3 of Justice League Unlimited on Cartoon Network. To date, the cartoon has been celebrated as the best TV superhero show of all-time. At Gizmodo, the critic commends its ensemble cast, episodic nature and the strong characterization.

Perhaps, the high point of Season 2 was Clash. In the episode, the naive and well-meaning Captain Marvel comes to blows with the paranoid and cynical Superman over Lex Luthor supposedly turning over a new leaf in his presidential run and building a fusion-powered Lexor City.

With fisticuffs and muscle-bound heroes, it appears both fighters in the strength and speed departments are evenly matched. In fact, durability and fighting skills are the difference makers as Superman emerges as tougher and more experienced.

In the end, Superman wins the battle by dodging Shazam’s lightning blast and which blasts the World’s Mightiest Mortal, reverting him to Billy Batson. Then, Superman covers his mouth before he can utter the magic words.

Really, the DCAU has produced some remarkable animated films about its favorite characters. In Superman/Shazam: The Return of Black Adam (DC Showcase), Black Adam returns after a five thousand year exile in space.

Particularly, the movie is part Shazam origin-story, part team-up and part Black Adam movie. Importantly, the movie features some impressive action sequences during the battles between the titular characters.

As we all know, Captain Marvel possesses the Wisdom of Solomon, the Strength of Hercules, the Stamina of Atlas, the Power of Zeus, the Courage of Achilles and the Speed of Mercury.

Once again, Superman and Black Adam are a match physically and in energy projection. However, Superman’s weakness to magic makes Captain Marvel more than his equal. In battle against Black Adam, Superman soon loses the advantage.

In the end, it is Captain Marvel that ends Black Adam’s rampage on Earth. Though not without some help from Superman with lessons on morality, protecting the weak, and not killing even his enemies.

POPULAR SCIENCE FAN CELEBRATING SUPERMAN DAY AT THE MOVIE THEATER IN METROPOLIS TO ENTERTAIN YOURSELF ABOUT #THEMOSTPOWERFULHERO? CLICK ON FINAL CRISIS BELOW TO #CELEBRATECOMICCON AND BUY THE PAPERBACK COMIC.

Though Man of Steel received mixed reviews from critics and audiences, the general consensus is that it is an ambitious re-introduction of Superman to a modern audience. Particularly, it features incredible VFX that have impressed fans worldwide.

Perhaps, one of its least celebrated moments is the black hole scene towards the end of the movie. During the alien abduction, the digital Jor-El saves Lois and formulates a plan to defeat General Zod and the Kryptonians.

From Lois Lane, Superman learns they can stop the Kryptonian terraforming by colliding the World Engine ship with his rocket he escaped in when he was an infant.

Since both machines are powered by phantom drives, which bends space, a black hole is created. Soon, the Kryptonians are sucked into the Phantom Zone unable to escape. Heroically, Superman saves Lois Lane in free fall and escapes the Phantom Zone.

Importantly, since it is a black hole, and nothing, not even light can escape a black hole, Superman definitely travelled Faster-Than-Light to escape the back hole.

FILM: SHAZAM RIPPED OUT THE EYE OF SIN

Soon, Shazam is becoming the DC Extended Universe’s new powerhouse. In his first live-action movie, Shazam!, the titular hero took on supernatural threats in Fawcett City. And he had help from the Shazam Family.

In order to save Fawcett City, Shazam flies the powerless Sivana to the carnival where the Family is fighting the other Sins. Powerfully, he rips out the Eye of Sin from Sivana which contains all the Seven Deadly Sins.

In terms of power, at least a Mountain-Level of Super Strength since Black Adam unleashed them in the past, killing millions of people.

Visit Super Power Explained: 5 Feats That Show Superman Has Infinite Super Strength for the explanation of Superman’s greatest feats. In addition, I address this feat in my book Superman, The Greatest Story: How Art Deco Meets Plot Device.

During the Post-Crisis continuity, the issue confirms the editorial mandate that Superman and Captain Marvel are equals. Also, it reveals that both superheroes have infinite super-strength.

COMIC: CAPTAIN MARVEL CAN DEFEAT THE LEGION OF DOOM

For the most part, Captain Marvel has served as a JLA reserve member to call upon when Superman is not available or in distress. In Justice (2006) #5, Captain Marvel answers Superman’s distress call as he is being attacked by the Legion of Doom.