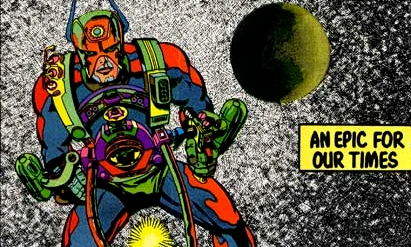 Originally, Director Ava Duvernay and Mister Miracle writer Tom King co-wrote the script for the movie. In fact, the New Gods movie had begun filming. In 2021, New Gods was removed from the DC Extended Universe film slate with little explanation.

In our Reading Guide, we show why the Kirby-created franchise is space opera and can take the DC Extended Universe to the next level. Here is our New Gods chronology since their first appearance in 1970 containing the mainstream continuity titles.

Before debuting the New Gods, legendary writer and artist Jack Kirby introduced new characters to the series Superman’s Pal, Jimmy Olsen called the Newsboys Legion. At the head was Morgan Edge, who headed Galaxy Broadcasting System, owned the Daily Planet where Jimmy Olsen and Clark Kent worked. Secretly, he operated a criminal organization called Inter-gang. In order to get rid of both Clark and Jimmy, he sent Jimmy on an assignment to uncover the secrets of the Mountain of Judgment.

Namely, Jimmy and The Newboys, filmed their journey through the Zoomway. Indeed, they discovered that the Mountain of Judgment was actually a gargatuan space vehicle. There, they discovered a scientific society called the Hairies led by a man called Jude. Fortunately, the Newsboys discovered that Morgan Edge planted alpha-bombs in their cameras to destroy the Hairies. And he was doing so in service of his alien master, Darkseid. Though the plan failed.

In reality, the Hairies were not New Gods. Instead, they were genetically modified humans by a secret government organization called the DNA Project. Indeed, it was run by the original Newsboy Legion, who were the parents of the current Newsboys. The Project had mastered the human genome and could clone humans from cells. In Post-Crisis Continnuity, The DNA Project was used under the name of the Cadmus Project.

In 1971, New Gods debuted. In the first issue, Jack Kirby introduced the New God Orion, who with his friend Lightray came from the paradise New Genesis. Together, they lived on the hovering city called Supertown where Highfather, in contact with the Source received messages on the wall.

The Source prophesied that in order for Orion to stop Darkseid’s quest for the Anti-Life Equation, he had to journey to Apokolips then to Earth. On Apokolips, Orion found four people whom Darkseid believed held a fragment of the Anti-Life Equation. He freed them, then returned them to Earth. On his travels to Earth, Darkseid used Mother Box to hide his face and adopt a civilian identity called O’Ryan.

Originally, the war between New Genesis and Apokolips started when Darkseid’s uncle, Steppenwolf, murdered Avia, Izaya’s wife. In retaliation, the ruler of New Genesis invaded Apokolips which was ruled by Queen Heggra, Darkseid’s mother. In the shadows, Darkseid gave Metron Element X so that he would assist. In return, Metron created the Boom Tube which Darkseid used to teleport to Apokolips. Desperate, Izaya pled and the Source evolved him into Highfather. Then, a truce was made where both rulers would exchange their sons, Scott Free and Orion.

After the Crisis On Infinite Earths reboot, John Ostrander and comic legend John Byrne re-launched the New Gods. Though, the New Gods continuity was maintained. In Legends, Darkseid schemes against the heroes of Earth to undermine their credibility. To this end, the God of evil unleashes two monsters from Apokoips, Macro-Man and Brimstone. Prominently, the Justice League launched its high profile series.

In the crossover event, the New Gods begin to feature prominently in Superman titles. Importantly, Darkseid transported Superman to Apokolips with his Omega Effect. There, he was transported to Armagetto where he was an amnesiac though a hero to the Lowlies. Orion and Lightray traveled to Apokolips to rescue Superman who had been indoctrinated by Granny Goodness. With the Mother Box, the sentient computer, Superman was restored. After a fight with Darkseid, Superman managed to outrace th Omega Effect, hitting Darkseid. Then, the Man of Steel was sent back to Earth.

In 1989, New Gods debuted its third series. Particularly, it followed the events after the Cosmic Odyssey four-issue limited series. The new series centers on the struggle between New Genesis and the Insect Empire for Supertown’s governing power. In addition, it tells of Apokolips’ attempts to continue its war on Earth. Again, the central protagonist is Orion of NewGenesis.

Legendary artist and writer John Byrne debuts on New Gods vol. 4. The premise of the series is the end of Darkseid’s quest for the Anti-Life Equation. Now convinced that it does not exist, the ruler of Apokolips seeks to control the Source. After unleashing a wave of darkness across the universe, Darkseid’s plan is foiled by Orion. In an anticipated showdown, Orion heads into space to confront his father. In the Source, the New Gods duel until one final victor emerges: Orion.

Catastrophically, Darkseid’s death sent shockwaves through New Genesis and Apokolips. Indeed, both planets were destabilized by the imbalance between Good and Evil. In order to prevent the unleashing of the Old God S’ivaa, Highfather started a self-imprisonment in an asylum. However, S’ivaa who slumbered in the eternal sea, was free! After he began his dance of universal destruction, Highfather recruited Superman and Orion to hold it off. Successfully, S’ivaa was imprisoned on the Source Wall though Darkseid and Highfather melted in its fire.

Legendary artist and writer John Byrne created a unified origin story for the New Gods and the Old Gods. In the beginning, there was a First World seedless and ormless. Then, there was a Second World home of the Old Gods. After, the Godwave seeded the universe with divinity and the potential for super powers. Also, there was a Third World where the gods having attained adulthood warred for thousands of years. Then, it exploded into two planets, Apokolips and New Genesis called the Fourth World.

In 2011, the New 52 re-launch rebooted the DC Universe with 52 parallel universes. For this reason, many characters’ origins were changed while others were removed. In the new origin of the Justice League, Darkseid invades Prime Earth in its first alien invasion with his arm of parademons.

In 2012, Darkseid continues his conquest of the DC Multiverse. On Earth-2, he sends Steppenwolf to conquer it. There, he finds opposition from Superman though Wonder Woman loves him. On Apokolips, Big Barda falls in love with Scot Free and the two escape. They are randed as traitors. In the battle for Earth-2, Steppenwolf impales Wonder Woman and kills Superman. After the invasion, the Earth is left cratered and Steppenwolf and his armes escape to Earth-0.

In 2015, acclaimed writer Geoff Johns worked on the final storyline of the New 52. Justice League: Darkseid War is a masterful crossover that adds to the New Gods mythology. According to Amazon prophecy, the child of Darkseid and Myrina Black is going to usher a new darkness on Earth. Known as Grail, she summons the Anti-Monitor in order to conquer Earth and kill Darkseid. In his quest for the Anti-Life Equation, Darkseid invades Earth though it leads to fatality. Caught between a godly war, Wonder Woman and the Justice League must save Prime Earth or become gods!

The Kirby Specials are six one-shots released to celebrate the 100th anniversary of Jack Kirby.