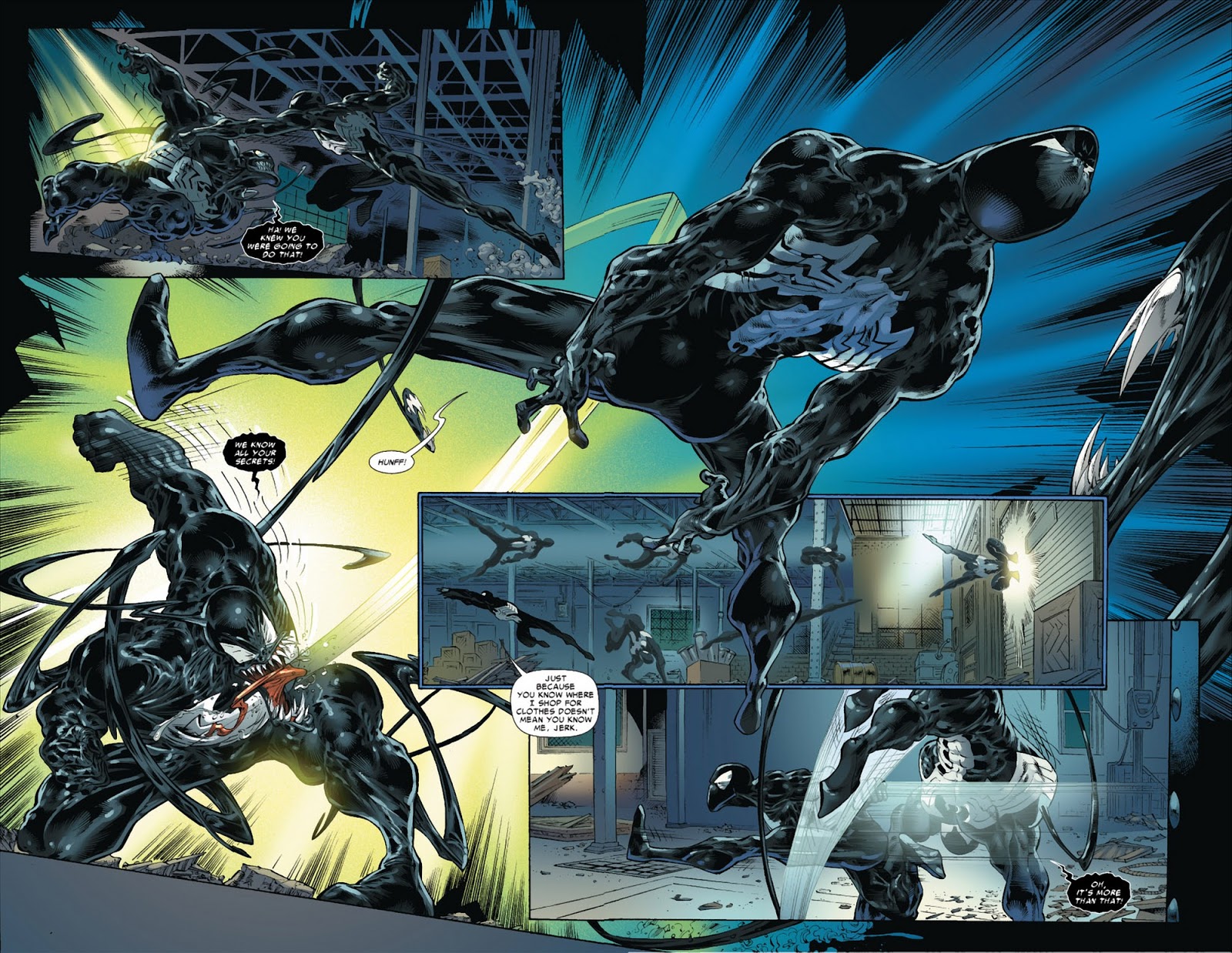 SYNOPSIS FOR “RISE OF THE OLYMPIAN PART 1: PLAGUE AND PESTILENCE”

In this origin story re-telling, the symbiote has fully bonded to Eddie Brock. He is now prepared to get his revenge on Spider-Man for losing his reporter job at the Daily Globe. Venom becomes a stalker and goads Spider-Man into a fight…

Enter the two contestants at the Daily Bugle in New York. On the left side is Spider-Man and on the right side is Venom.

CHECK OUT THE ACTION: CAPTAIN AMERICA VS IRON MAN.

In order to get revenge on Spider-Man who caused him to lose his reporter job at the Daily Globe, Venom stalks Spider-Man with a camera. Venom goads Spider-Man into fighting him in New York.

The battle to decide who is the true Spider-Man!

A FAN OF SPIDER-MAN AND MARVEL COMICS? SUBSCRIBE TO OUR NEWSLETTER TO RECEIVE THE LATEST POSTS ON YOUR FAVORITE DC HEROES.

‘Amazing Spider-Man’ (1988) #300, marks the first appearance of Venom in Marvel continuity. The issue tells the origin story of Venom who bonded to Eddie Brock as he was attempting suicide at Our Lady of Saints. The issue reveals Eddie’s hatred for Spider-Man over the latter’s involvement in Eddie’s loss of employment at the Daily Globe.

The graphic novel was created by Tom DeFalco and David Michelinie.

NEXT BATTLE OF THE WEEK: CAPTAIN MARVEL VS ROGUE. MARCH 17TH. 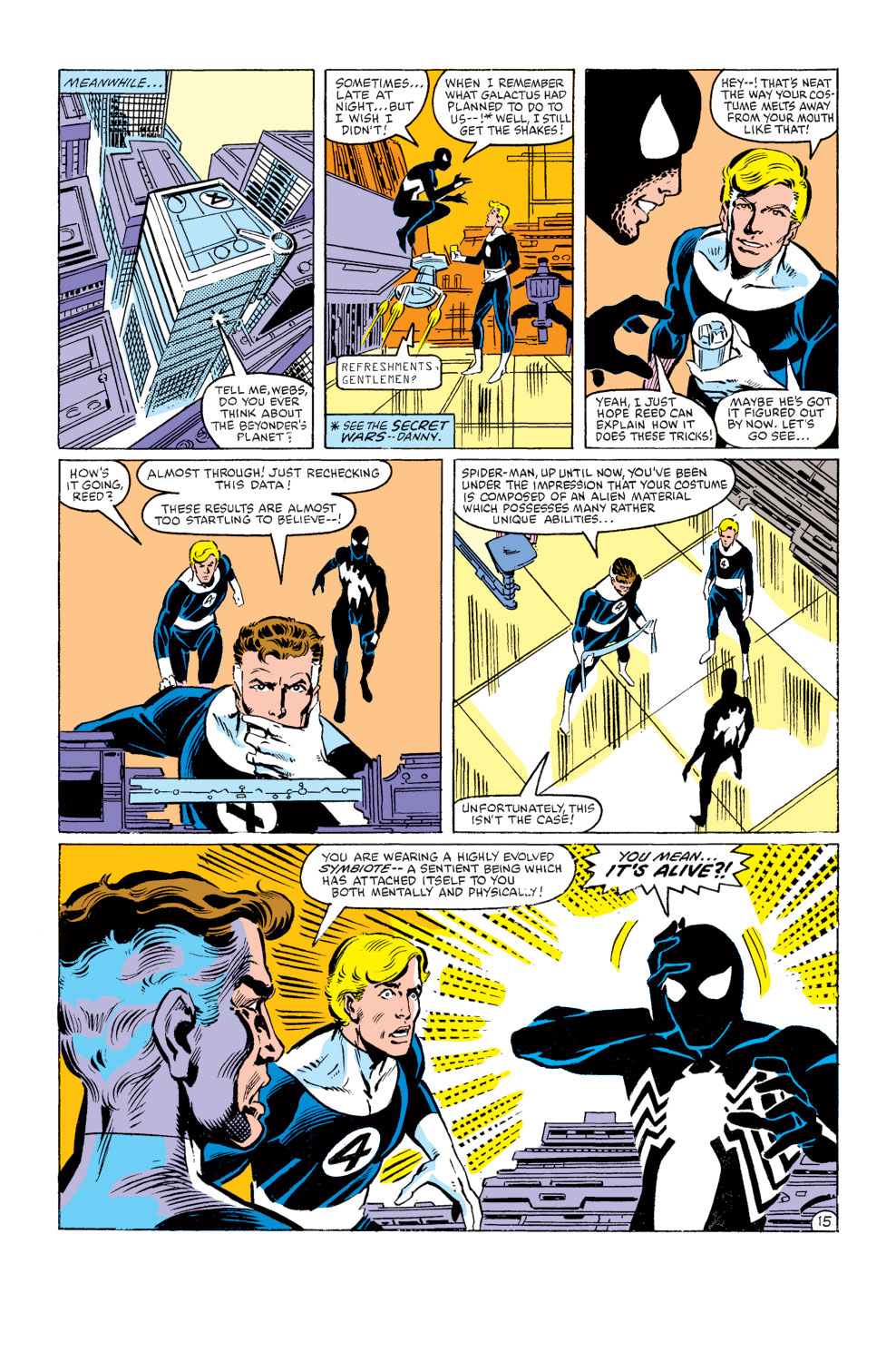 SPIDER-MAN HAS BEEN SLEEP-WALKING THROUGH NIGHTMARES

Spider-Man’s life has gotten more complicated after his time on Battleworld. He is divided between Mary Jane who just found out about him being Spider-Man and the Black Cat.

At night, Spider-Man is having nightmares and is sleep-walking above the rooftops of New York City.

Spider-Man slept through the day and wakes up from his nightmare sleep-walking with the symbiote. He decides to get some answers about his costume and heads to the Baxter Building, the base of the Fantastic Four. There, Spider-Man is greeted by H.U.B.E.R.T., the security robot. He is escorted to a room with advanced machinery and is greeted by the Human Torch. Spider-Man quickly explains that he wants his costume examined and Mister Fantastic agrees.

CHECK OUT THE STORY: LUKE SKYWALKER TAKES ON DARTH VADER

PREVIOUS: SPIDER-MAN GETS A NEW BLACK COSTUME IN THE ‘SECRET WARS’ EVENT ON BATTLEWORLD. JANUARY 12TH.

NEXT: VENOM IS BORN! MARCH 2ND. 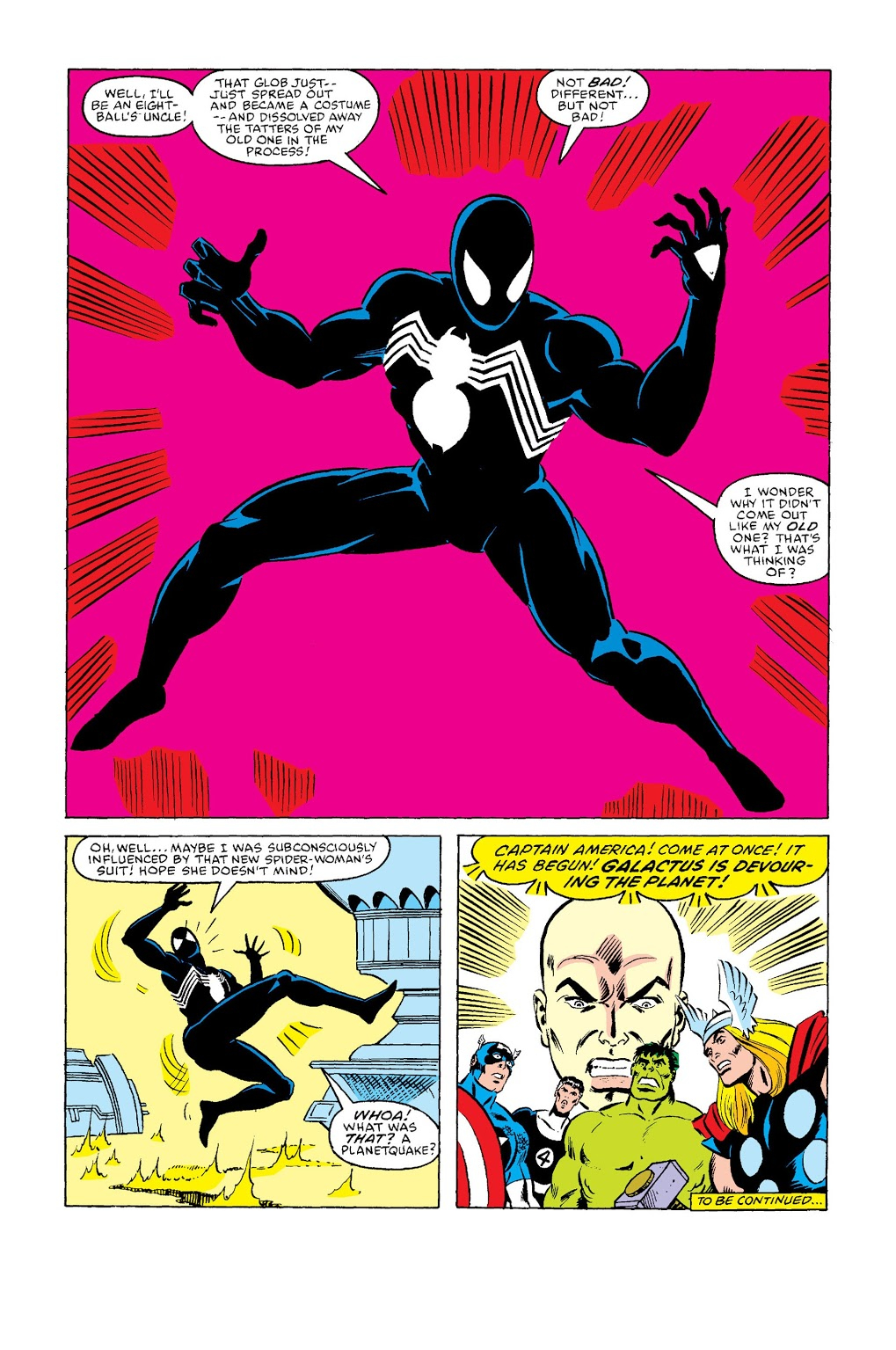 In a battle with Hobgoblin, Spider-Man and Hobgoblin are trapped in a building on fire. Hobgoblin awakens first and attempts to finish off Spider-Man who evades the attack. As the whole structure is about to collapse, Hobgoblin evades pursuit in his battle van. Spider-Man is in hot pursuit.

Hobgoblin set the battle van on auto-guidance system and it is headed for Pier 83. The battle van crashes into the Hudson River with Spider-Man and Hobgoblin locked in battle. As Spider-Man attempts to save Hobgoblin, the battle van’s self-destruct mechanism engages and the battle van explodes later. Swimming to the surface, Spider-Man borrows a lamp from a frogman and plunges back into the waters. He searches for Hobgoblin amidst the debris and only finds “a ruined mask.”1

A day later, Peter Parker parts with Harry Osborn after consoling him for his father’s death. Suddenly, his spider-sense goes wild, “like a bomb exploding within [his] head.”1 Spider-Man says it’s the third monster tingle he has experienced in the last three days and he puts on his costume.

He states the danger is coming from Central Park. Web-swinging across trees, he arrives at Sheep Meadow. He finds a massive alien structure. Moved by a superior force, he enters the alien structure and vanishes.

SPIDER-MAN, THE HEROES AND THE VILLAINS MEET THE BEYONDER IN SPACE!

Reed Richards asks Professor X to scan the construct. He recognizes the aura of evil from the villains. Dr. Doom makes the introductions of the villains who are Enchantress, Ultron, Absorbing Man, Wrecker and the Wrecking Crew, Thunderball, Piledriver, Bulldozer, Kang, Galactus, the Lizard, Molecule Man, Dr. Octopus and himself. Dr. Doom recognizes the construct of the heroes and concludes it is for war. As the heroes wonder why Magneto is in their midst, Professor X motions to pay attention to what is happening in space.

The heroes watch as the entire galaxy in their vicinity is being wiped away. Thor and Iron Man are in awe. Then, from the remains, a planet is created. Battleworld is created. Then, light erupts in space. The Beyonder introduces himself: “I am from beyond! Slay your enemies and all you desire shall be yours! Nothing you dream of is impossible for me to accomplish!”2

Galactus sensing the Beyonder’s power flies out of the construct in the intent to have Beyonder rid him of his hunger. Dr. Doom is in pursuit. Galactus and Dr. Doom are swatted away like flies to the bewilderment of Captain America and Professor X. The heroes and the villains are transported to Battleworld.

SPIDER-MAN DEFEATS THE X-MEN AMIDST A STORM ON BATTLEWORLD

In ‘Marvel Super Heroes Secret Wars’ (1984) #3, a storm is raging on Battleworld. The heroes lament their homes as factions are forming and the villains are preparing for war. At the heroes’ base, in the communications chamber, Hulk, Captain America and Mister Fantastic are monitoring the storm, Galactus and Doombase. Mister Fantastic laments his pregnant wife and asks Captain America to be excused. Spider-Man follows Mister Fantastic and notices how depressed he is. Then he arrives at X-Men HQ.

Spider-Man overhears the X-Men’s discussion. They lament that even on Battleworld, they are not accepted by the Avengers and the heroes. They decide to put their plan in action. They are going to join Magneto. At that moment, Spider-Man storms through the window and swats Professor X and Cyclops. He exclaims he is going tell others about their plans. He webs Colossus and evades Rogue’s attack. He webs Rogue and Nightcrawler and also swats away Wolverine attempting to sneak behind him. Then he escapes evading, Cyclops‘ optic beam. As Spider-Man finds Mister Fantastic attempting to tell him of the X-Men’s plans, Professor X wipes his mind!

DURING THE ASSAULT ON DOOMBASE TO SAVE SHE-HULK, SPIDER-MAN CREATES THE ALIEN SYMBIOTE

In ‘Marvel Super Heroes Secret Wars’ (1984) #8, the heroes rescue She-Hulk in danger at Doombase on Battleworld. An all-out battle commences. During the battle, Spider-Man intercepts Titania attempting to land a steel girder on top of the heroes. Spider-Man kicks her in the back.

After the battle is over, Captain Marvel finds a battered She-Hulk on the floor. Mister Fantastic places She-Hulk in a pod to regenerate. Meanwhile, Spider-Man finds Thor (and Hulk) exiting a room with his cape reconstituted. Spider-Man asks Thor and Thor tells him that Hulk found a “wondrous device.” Hulk tells Spider-Man it’s in a room where Spider-Man can just think to produce any clothing he wants.

Spider-Man heads into the room and is able to find the device. He concentrates then a black sphere is created on the device. Spider-Man’s spider-sense tingles and as he attempts to evade, the alien symbiote grafts itself onto Spider-Man’s costume. Then, Spider-Man’s black costume is produced on Battleworld. Spider-Man wonders why the costume came out black and says that maybe he was “subconsciously influenced by that new Spider-Woman’s suit!”3

CHECK OUT THE STORY: IN THE DREAM OF K’UN LUN, DANNY RAND DEFEATS THE DRAGON SHOU-LAO THE UNDYING, AND BECOMES THE IRON FIST

SPIDER-MAN AND THE HEROES LEAVE BATTLEWORLD

At the ‘Marvel Super Heroes Secret Wars’ (1984) #12, the heroes have triumphed and prepare to leave Battleworld. As they prepare to return to Earth, they head to the same room where Spider-Man created his costume. Spider-Man asks the heroes if their costumes respond to thoughts. Human Torch responds “No–They’re just–Just clothes!” Spider-Man wonders to himself why his costume does.

NEXT: SPIDER-MAN DISCOVERS THE ORIGIN OF THE ALIEN SYMBIOTE FROM MISTER FANTASTIC. FEBRUARY 2ND.