Visit our product review for “Countdown to Final Crisis #2” on September 18th.

In an attempt to create the Fifth World, the Great Disaster has fallen. Not even the gargantuan might of Jimmy Olsen is sufficient to hold Darkseid in check.

Suddenly, Orion Boom Tubes in Metropolis. To this end, he has come to fulfill the prophecy of Darkseid’s death at his hands.

Enter the contestants in Metropolis. On the left side is Orion, the Dog of War and on the right side is Darkseid, the God of Evil.

In the issue, Darkseid seeks to create the Fifth World on Earth no matter the cost. Suddenly, Orion boom-tubes on Earth. According to the prophecy, this is the day Orion kills Darkseid!

The battle to decide who is the New God

A FAN OF DARKSEID? SUBSCRIBE TO OUR NEWSLETTER TO RECEIVE THE LATEST POSTS ON YOUR FAVORITE HEROES AND VILLAINS.

CHECK OUT THE ACTION: DOOMSDAY VS DARKSEID

‘Superman’s Pal, Jimmy Olsen’ (1970) #134, titled “The Mountain Of Judgment!”, marks the first cameo appearance of Darkseid in DC continuity. Superman foils a bomb attack on the Hairies, Jimmy Olsen and the Newsboys. The attack was from Morgan Edge who received orders from Darkseid.

The issue was created by Jack Kirby and Neal Adams. 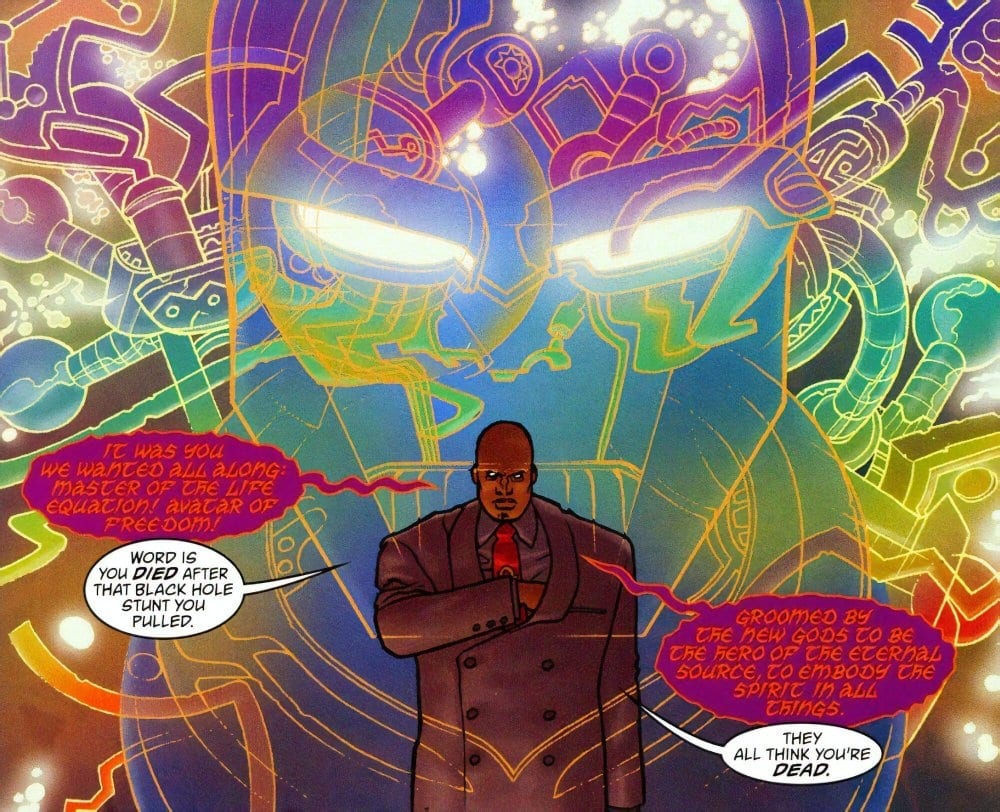 IN THE MULTIVERSITY MAP, THERE IS ONLY ONE DARKSEID

From a thread on Quora, there is an explanation about the Multiversity map:

Darkseid is a Multiversal being.

In DC Comics the Multiverse is made up of spheres.

Then we got the Bleed. The Bleed is split between two layers. Upper and lower.

In the Upper layer you got the 52 Main Universes.

And for those gods a universe can be as big as a sphere you can hold in your hand, or a bubble you can pop.

Above that Sphere theres the Monitor Sphere, home of the Prime Monitor that is the one that decides which universe is risen to the upper layer of the Bleed, when a main universe is destroyed.

-Is Darkseid a multiversal being (one being existing in all multiverses at the same time) or a single being who has different versions of himself throughout the multiverse?, Quora

In ‘New Gods’ (1997) #15, Darkseid and Highfather are trapped on the Source Wall. In order to communicate with Vykin the Black, Darkseid sends an avatar of himself. Each avatar possesses a fraction of Darkseid’s nigh-infinite power.

SPHERE OF THE GODS

Because Darkseid lives in the Sphere of the Gods, beyond the DC multiverse, there is only one true form Darkseid.

Though since Final Crisis, there have been multiple origins of Darkseid when the multiverse was reborn, the other versions of Darkseid that have entered the DC multiverse, are merely avatars. In “What is Darkseid’s True Form?”, Fiction Horizon goes over the concept of avatars.

In The Multiversity Guidebook, the Highfather, also a New God and Darkseid’s brother, states that each reality – past, present and future – has its own version (avatar) of Darkseid. This means that Darkseid is actually an omnipresent, non-corporeal being fragmented so that he can be present in every possible reality.

As far as we know, only actual multiversal deities (The Presence in DC Comics and The One Above All in Marvel) and Dr. Manhattan have these abilities, which would put Darkseid – his true form, that is – very high on the list of the most powerful beings in the history of comic books.

DOOMSDAY AND SUPERMAN HAVE DEFEATED AVATARS OF DARKSEID

During the battle, Doomsday delivers a painful beatdown on Apokolips’ monarch.

Though there is debate that the Darkseid version Doomsday defeated was an avatar, writer Dan Jurgens seemed to confirm otherwise.

In the “Supergirl from Krypton” storyline, it is hinted that the Darkseid that Superman imprisoned on the Source Wall at the end of the battle was an avatar.

A FAN OF DARKSEID? CLICK ON FINAL CRISIS OMNIBUS (NEW PRINTING) BELOW TO BUY THE COMIC BOOK ON AMAZON.

“Final Crisis” reveals true form Darkseid. At the end of “Death of the New Gods”, the battle between New Genesis and Apokolips invades Heaven. Evil wins the battle, Darkseid armed with the Anti-Life Equation and the New Gods fall to Earth.

Known as Boss Dark Side of the Dark Side Club, he orchestrates the ALE going live on the Internet creating a singularity that threatens to send New Earth to Hell, dragged the whole DC multiverse past, present and future with it.

At Bludhaven, true form Darkseid is finally triumphant! With a half of the human population under his control, he has imposed the ALE on Earth.

As the Doomsday Singularity drags Earth to Hell the Fifth World is finally born.

As the Doomsday Singularity drags the Earths to Hell, the heroes work on the JLA Watchtower on the construction of the 31st century Miracle Machine.

Indeed, it is the only weapon capable to reverse the effects of the Anti-Life Equation and restore the DC multiverse.

FEAT OF THE DAY: IN ‘INFINITE FRONTIER’ #0, TRUE FORM DARKSEID KILLS THE QUINTESSENCE IN A SURPRISE ATTACK