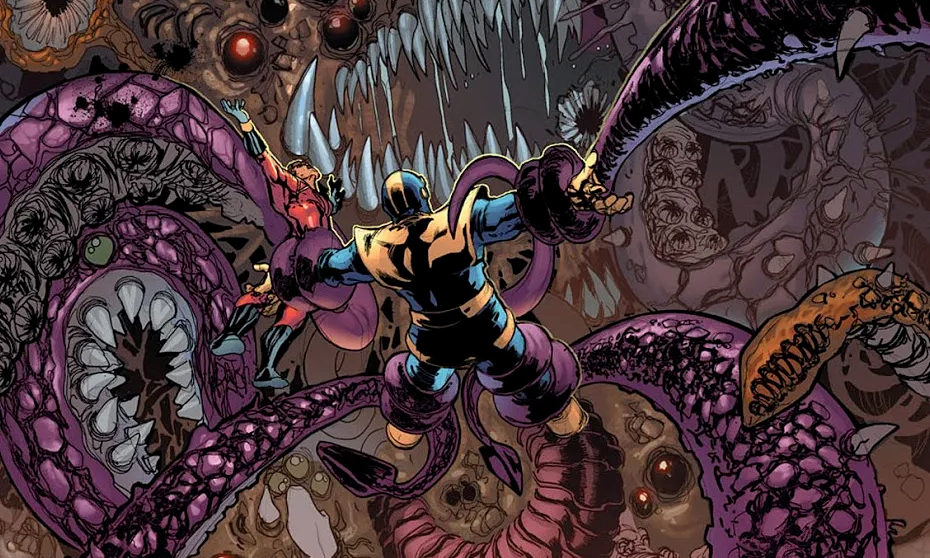 IN THE CANCERVERSE, DEATH APPARENTLY KILLS EVERYONE AFTER A NECROPSY RITUAL

To begin, in Thanos Imperative (2010) #1, the forces of the Cancerverse launch an attack on the Earth-616 universe. Particularly, their objective is to locate Thanos, the Avatar of Death. As matter of fact, their objective is to rid the Earth-616 universe of the concept of Death. In Thanos Imperative (2010) #6, the Guardians of the Galaxy attempt to stop Mar-vell’s necropsy ritual.

In the Cancerverse, Thanos has willingly agreed to the ritual. Aided by the Revengers, Mar-Vell successfully summons Mistress Death. However, she kills all of the inhabitants of the Cancerverse. In reality, Thanos planned the scheme. And when Mistress Death refuses to claim his soul, he vows to destroy the universe.

A FAN OF THIS COMIC? CLICK ON Guardians of the Galaxy Vol. 4: Original Sin BELOW TO BUY the PAPERBACK comic.

IN THE CANCERVERSE, DEATH DOESN’T EXIST

In Guardians of the Galaxy Vol. 4: Original Sin, the Guardians of the Galaxy and Thanos are trapped in the Cancerverse. Moreover, the Guardians possess the Cosmic Cube which Thanos plans to use to free himself. During a battle, Star-Lord impressively kills Thanos with the Cosmic Cube. However, Thanos comes back to life and punches him throuh the abdomen. Eons ago, the Many Angled Ones used Mar-Vell’s cancer to rid the Earth-10011 of Death. In a necropsy ritual, the embodiment of Death was annihilated.

Then, it became the Cancerverse. As a result, in the Cancerverse, every life form is a cancer. As you known, unless irradiated, cancer cells multiply continuously, don’t undergo apoptosis and are effectively immortal. Moreover, Death does not exist there. For this reason, Mistress Death could not claim Thanos. In fact, even the Revengers killed by Death, came back to life. Here, Mistress Death cannot claim souls and her powers extend only to the Earth-616 universe.