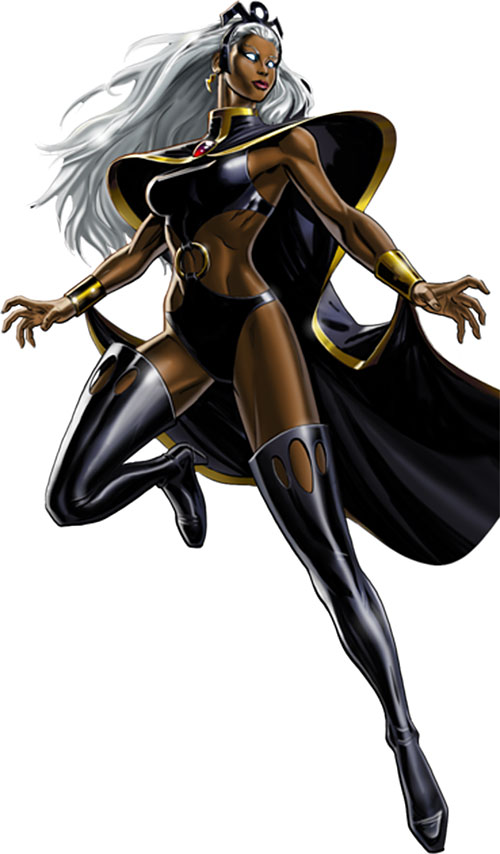 Ororo Munroe is the child of American photojournalist David Munroe and the Kenyan princess N’Dare. She comes from a line of African priestesses that have white hair, blue eyes and the power to use magic.1

Ororo was orphaned at the age of five, as her parents died in a plane crash in Cairo, Egypt. Though she survived from the accident, she developed a deep claustrophobia from being buried in the rubble. She was raised by a gang of thieves led by Achmed El Gibar. Ororo became a thief and once attempted to steal from Professor Xavier. At age 12, she decided to journey South. She accepted a ride from a stranger and was nearly raped by him. She managed to kill the man though she swore never to another human life.2

After nearly dying in the Saharan Desert, she saved T’Challa using her weather powers. The two shared romance though it was ended.3,4 Ororo finally reached her ancestors’ homeland on the Kilimanjaro Valley in Kenya. She was taken in by a tribal woman Ainet who taught her the use of her powers. Soon, Ororo became worshipped by the tribes as a goddess.5

Years later, Ororo helped the X-Men, battle a mutant known as Deluge that used Ororo’s control of weather to destroy humanity. Afterwards, she returned to her tribe.6

Months later, however, Professor Xavier was left with no choice but to recruit Storm, as he called her, and other mutants from around the world into the X-Men in order to rescue his original students from the threat of the sentient island being, known as Krakoa. Prof. Xavier explained to Ororo that she was not a “goddess”, but a mutant and had a responsibility to use her abilities to help the world, just as she had helped the local tribes. Curious, Ororo accepted Professor Xavier’s offer and was given the code name “Storm”.