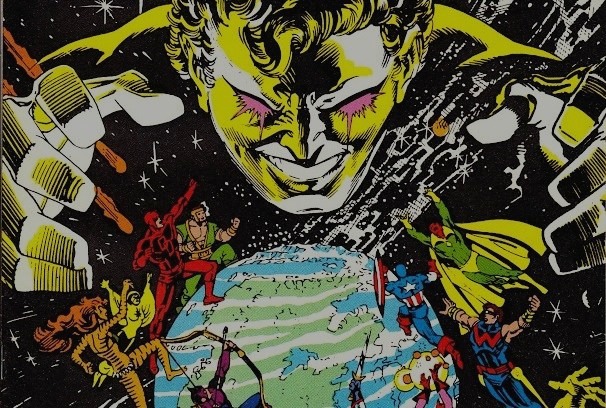 “I AM FROM BEYOND”

When ‘Secret Wars’ (1984) exploded into the pages of Marvel comics, it was the first crossover event in Marvel continuity. From the first pages, the Beyonder claimed to be “from beyond.”1 He made a tempting proposition to the heroes and villains.

In casual fashion, the Beyonder then went on to destroy a galaxy and rebuff Galactus and Doctor Doom. He created Battleworld out of the remains of nearby planets where heroes and villains would battle in order to win their hearts’ desires. Who is this Beyonder?

In reality, the Beyonder stems from the Beyond-Realm.

The Beyond Realm was originally a being known as the Beyonder it was an infinite realm beyond the Marvel Multiverse (or Omniverse), and was the sum of everything outside the multiverse and that the Marvel Multiverse (or Omniverse) was a drop in the sea compared to the Beyond-realm. Making it infinitely bigger than the known Marvel Multiverse (Or Omniverse) at this time it is believed Here, that the Beyonder (Originally) is/was the all-powerful God, Creator, Ruler, and Inhabitant. He is everything and everyone in this realm as everything is him. His mere thought became reality anything he dreamed of was his and his alone with him in this Plane of Existence it would be utterly nothing.

A FAN OF BEYONDER? CLICK ON SECRET WARS BELOW TO BUY THE PAPERBACK COMIC.

WHY PRE-RETCON BEYONDER IS MARVEL’S GOD

HIS POWER IS IMAGINATION

In ‘Secret Wars’ (1985) II, Beyonder arrives on Earth. His purpose is to investigate the human feeling of desire. He is met with incomprehension and conflict follows with Earth’s heroes and villains. In one issue, Beyonder contemplates destroying the Marvel universe and everything in it. As he thinks, his thoughts cause universal disturbances. This shows Beyonder’s power is imagination.

In ‘Secret Wars II’ (1985), Beyonder extends his control to inanimate and animate life. Controlling every molecule and atom on Earth, Beyonder wants all things to pay him homage. How divine is that?

In ‘Secret Wars II’ (1985), Beyonder shows an impressive display of power. In front of the Magistrati, he gives Death a potion that kills her. An impressive feat since Death constitutes the semi-covered face of Living Tribunal and represents Vengeance. Furthermore, none of the Magistrati intervene to prevent this death, fearing Beyonder’s power. Finally, Death herself is a Multiversal entity.

Based on Beyonder’s feats, he is likely Omnipotent all across the board.