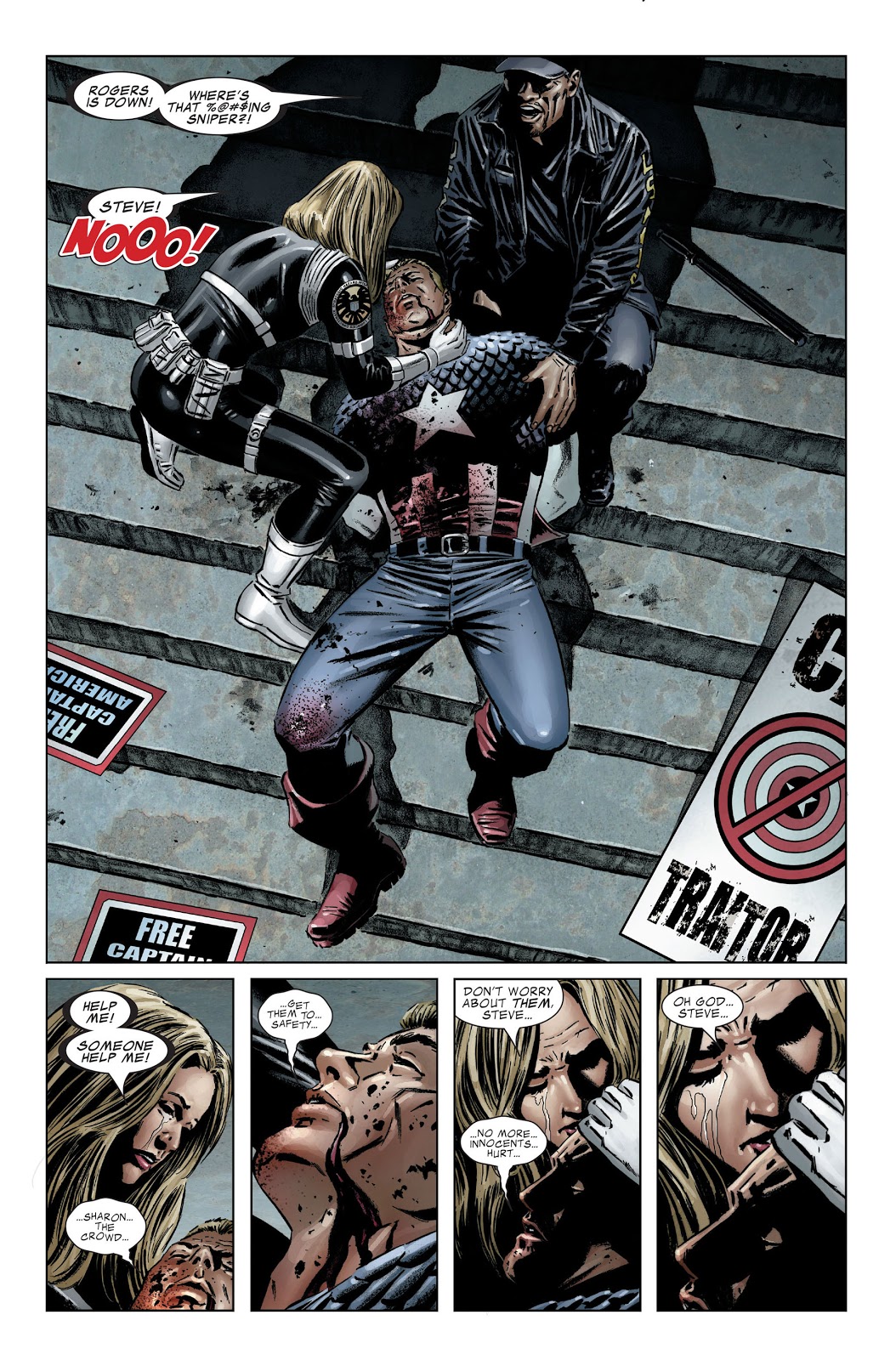 In ‘Civil War’ (2007) #1, the United States government introduces the “Living Weapon of Mass Destruction” registry for super powered individuals. Following a battle between Nitro and the New Warriors, Nitro exploded as a WMD apparently killing the entire team and a large number of civilians (including 60 school children). Captain America opposed the Superhero Registration Act abord the S.H.I.E.L.D. helicarrier. He feared that government control could limit the heroes’ freedoms and have the government decide who the enemies were.

He recruited a team called the Secret Avengers, which was later joined by the Young Avengers, Cloak and Dagger. Iron Man felt the heroes needed training and were accountable to the public. He sided with the Superhero Registration Act and recruited a team to bring Captain America in once the Act passed. Iron Man and Mister Fantastic created together Prison 42, which was named based on Iron Man’s 42nd idea on how to improve the world.

After his escape, Cap began organizing other anti-registration heroes into a group the press dubbed the “Secret Avengers.” Most of his core group (Captain America, Hercules, Bill Foster, Luke Cage, Daredevil (Daniel Rand), Falcon, and Cable) had to take on a series of identities to avoid capture, literally becoming outlaws. The Secret Avengers apprehended a number of criminals while evading the opposing heroes and the new S.H.I.E.L.D. “cape-killer” units. Other heroes joined them or were liberated after their arrests. The Young Avengers, Cloak, and Dagger were some of these later heroes to join the group.

Iron Man, on the other hand, felt that it was reasonable that heroes have proper training and oversight, that the casual self-policing the superhero community had enjoyed until now was insufficient, and (most importantly) that it was now impossible to resist this change in the political landscape. He gathered his own pro-registration heroes to bring in Captain America‘s group and other non-registered combatants. Mister Fantastic (Reed Richards), with the help of Yellowjacket and Tony Stark, began work on designing a prison (nicknamed 42 because it was the forty-second idea on Tony’s list of ways to improve the world) to detain superpowered violators.

He tells Wiccan to teleport them to a bunker headquarters. They are greeted by the Secret Avengers. Captain America that they are at one of 20 S.H.I.E.L.D. safe houses set up by Director Fury. They will be given new IDs. Elsewhere, at a televised broadcast, Tony Stark introduces Ms Sharpe who lost her son in the Stanford incident and Spider-Man. Spider-Man states it is time for superheroes to go legitimate and unmasks to reveal his secret identity. “My name is Peter Parker, and I’ve been Spider-Man since I was fifteen years old.”1

PROJECT: LIGHTNING WAS A LAST RESORT FOR THE SECRET AVENGERS… IT LED TO BLOODSHED, THE CIVIL WAR

In ‘Civil War’ (2006) #3, Captain America, Daredevil, Hercules and Goliath meet at a diner. They get a call of a fire at a petrochemical plant and 400 people are trapped. The team arrives and notices that they are at a Stark Industries plant. It is a trap. Iron Man’s team arrives and disables Cloak and Wiccan so Captain America and his team cannot teleport away.

Iron Man asks Captain America and his team to surrender. Captain America tells him he has five minutes to convince him. The two men shake hands. Then Iron Man notices an electron scrambler that disables his armor. The battle begins. During the battle, Captain America faces Spider-Man. Iron Man is able to get his armor back online and then deliver a bloody beatdown on Captain America.

Noticing that Iron Man might kill Captain America, Hercules bludgeons through Iron Man’s team. At that moment, Commander Hill activates Project: Lightning. The Thor clone arrives and strikes down Hercules. In ‘Civil War’ (2006) #4, Iron Man activates audio-blocks on Captain America. Goliath attempts to take down Thor and gets killed by a bolt of lightning.

Seeing it as a losing battle, the Secret Avengers attempt to fall back, but Thor strikes them. At that moment, Invisible Woman protects the Secret Avengers from the lightning bolt. Then, Cloak teleports them away. Sue Storm asks Mister Fantastic to not speak to her anymore. Spider-Man comments that Iron Man had promised no one would get hurt.

CHECK OUT THE STORY: SPIDER-MAN DISCOVERS THE ORIGIN OF THE ALIEN SYMBIOTE FROM MISTER FANTASTIC.

THE BATTLE IN THE NEGATIVE ZONE LED TO THE DISASTROUS END OF THE CIVIL WAR… CAP ARRESTED!

Captain America faces Iron Man a second time. This time, he has Vision completely disable Tony’s armor. Then, he delivers a beating to Iron Man. As he is about to deliver the finishing blow on Iron Man, rescue workers intervene and take him down. At that moment, Captain America realizes the damage done by the Civil War: “They are right. We are not fighting for the people anymore, Falcon…”2 Captain America unmasks and says they are arresting Steve Rogers. He orders his troops to stand down. He is taken into custody.

AT THE END OF THE CIVIL WAR, STEVE ROGERS IS SHOT FOUR TIMES AND KILLED