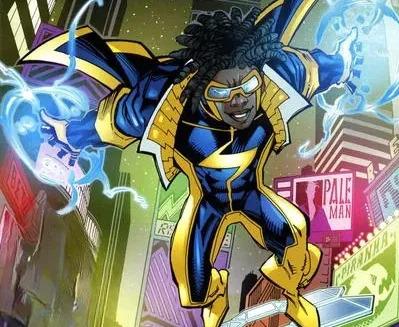 Shopping for a science fair gift? For the full battle, click on Static Shock (2011-2012) #1 to buy on Amazon. Visit our product review to find why the New 52 comic is a spectacular origin story.

In Harlem, Static makes his first appearance on the streets. The black teenaged hero as to stop an out-of-control S.T.A.R. Labs villain.

And as the superhero faces the public’s backlash, he is unaware of a plot against him.

Enter the contestants in New York. On the left side is Static and on the right side is Sunspot.

The battle to decide who is the true genius! Toggle Sunspot’s Negative Damage under Damage Points, to find out the power of his short-circuit. 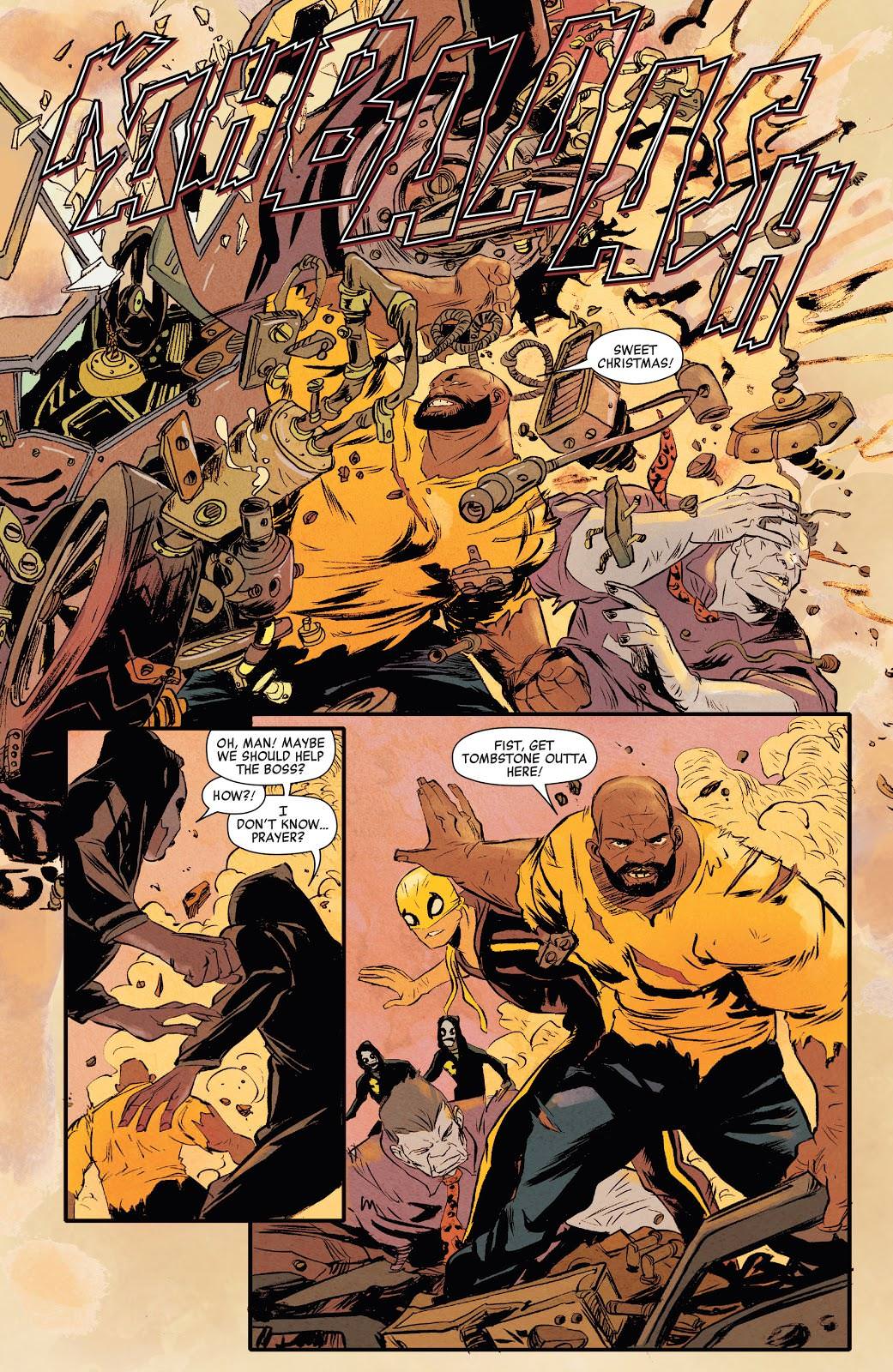 LUKE CAGE IS A REFORMED GANGSTER

Having reached adulthood, Luke Cage sought to better himself by finding legitimate employment. He maintained former gang ties and when one of his friends, Stryker, a criminal was hit by the Maggia, Luke saved him. This created a rift with another former gang member Reva who turned to Lucas and broke up with Stryker. Learning this, Stryker planted heroin stolen from Cottonmouth’s place and tipped off the cops. Lucas got arrested for a crime he did not commit and was sentenced to prison.

In prison, Luke was filled with rage over his friend’s betrayal and the supposed loss of his father. He got into brawls and his violent behavior got him transferred to Seagate Prison, one of the toughest prisons.

THE BURNSTEIN PROCESS IS A VARIATION OF THE SUPER-SOLDIER SERUM

At Seagate Prison, Dr. Burnstein was doing medical research on cellular regeneration based on a variant of the Super-Soldier serum. He selected Lucas as a volunteer.

He immersed Lucas in the “Electro-Biochemical System“, a device that contained an electrical field conducted by an organic chemical compound. When he left equipment unattended, Rackham tampered with the controls, hoping to kill Lucas. However, the treatment was accelerated past its intended purpose causing mutagenic change throughout Lucas’ body, fortifying his cells giving him superhuman strength and durability. Lucas used his new-found powers to escape the prison and make his way back to Harlem. A chance encounter with criminals inspired him to use his new powers for profit.[10]

The Burnstein Process granted Luke Cage superhuman abilities, even greater than Captain America such as superhuman strength (he is able to lift up to 50 tons), a healing factor, nigh-invulnerability and superhuman stamina.

The Avengers stumble upon a cave, investigate and are attacked by creatures. Meanwhile, the X-Men and the Queen also investigate. Then, Namor discovers Luke Cage and a battle ensues.

Namor attacks Luke Cage with an airborne piledriver then tosses Luke into the river. Using the Burnstein Process, Luke Cage holds his breath underwater. Noting that Luke can’t breathe nor speak, Namor says Luke Cage is weakening. Then, Luke Cage draws a punch. Namor exclaims “Imperius Rex” and responds with a devastating punch that creates a wave out of the water.1

Then, Namor knocks out both She-Hulk and Luke Cage by using Luke Cage as a bludgeon.

IN ‘POWER MAN’ #48, POWER MAN DEFEATS IRON FIST BY HOLDING HIM IN A CHOKE HOLD, NEARLY KILLING HIM

Not wanting to be a killer, Power Man stops himself.

FEAT OF THE DAY: IN ‘CAGE’ #20, THE HUMAN TORCH FREES LUKE CAGE FROM THE BOGEYMAN WITH A SEMI-NOVA 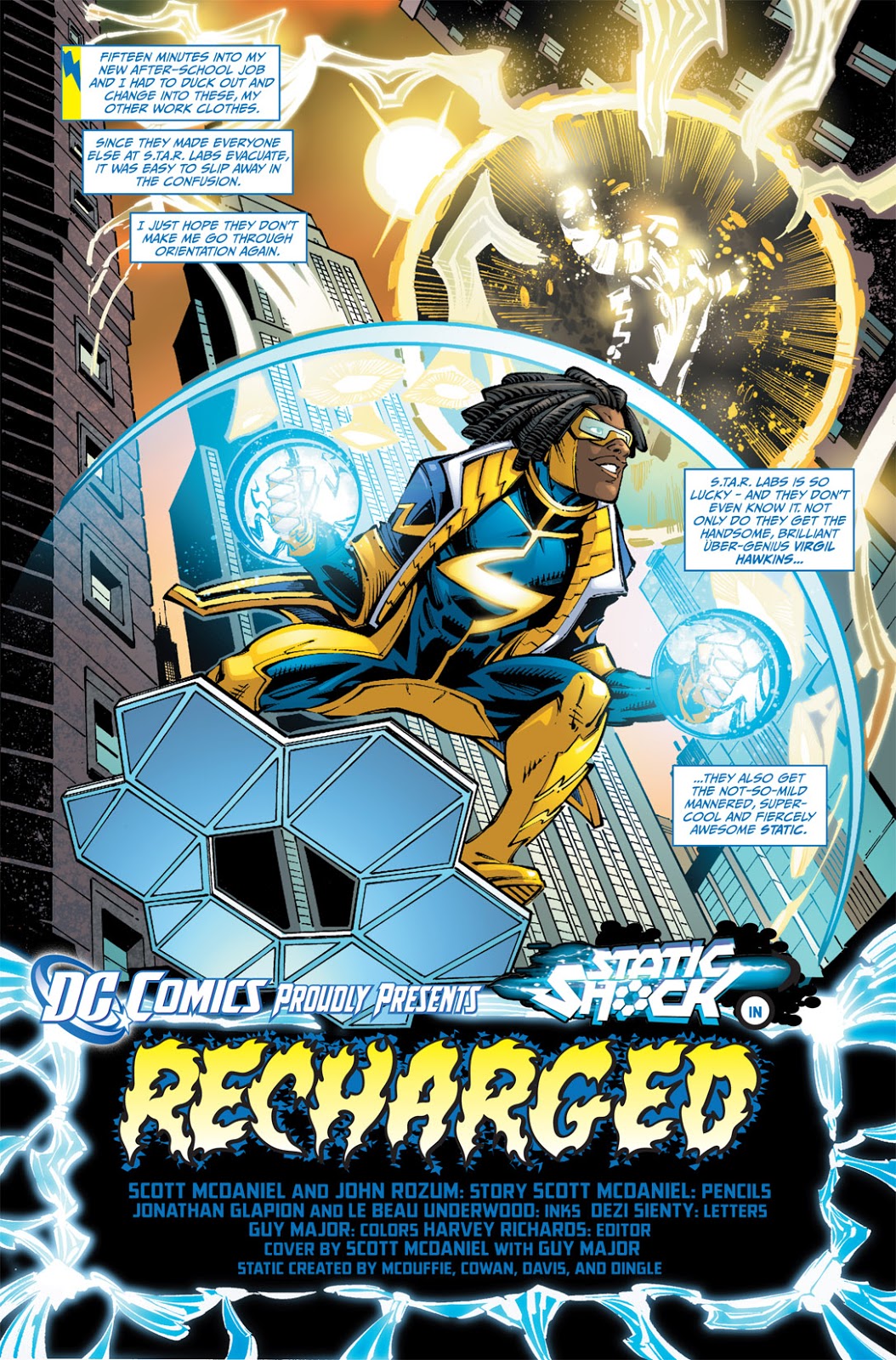 In ‘Static Shock’ #1, is the first appearance of Static in the New 52, your neighborhood black superhero. Static is on the streets of New York trying to contain Sunspot, who stole a special plasma protection suit from S.T.A.R. Labs.

S.T.A.R. Labs is Static’s new after-school job as a black superhero. He is on the scene. Static attempts various means to contain Sunspot. Finally, he places Sunspot in an E.M. field to ionize the plasma suit in the air. Finally, he short-circuits Sunspot on the Queensboro Bridge.

Static’s secret identity is Virgil Hawkins, a student at high school in Harlem. Hardware notes that his parents might worry once they find out that Sunspot’s plasma suit came from S.T.A.R. Labs where Virgil works.

In reality, Hardware reveals that Virgil’s work at S.T.A.R. Labs is a cover for the black superhero. Hardware states that he hid Virgil’s true purpose at S.T.A.R. Labs by revealing to the workers there that it is an opportunity to free him from the juvenile system by working at odd times of the day and night.

CHECK OUT THE STORY: GODZILLA: KINGDOM OF MONSTERS.

Static is a black superhero living in New York. In fact, Static has problems with his public persona. As Static interrogates Sunspot, he gets shot with a bullet “over a half mile.” Static attempts to trace the bullet with no success.

Despite his earnestness, the public blames Static for the damages. Hardware reminds Static that he is lucky for having evaded arrest and advises him to return home.

The heist was actually orchestrated by the police and the Slate gang. They discuss Static’s superheroics and possible interference by Hawkman. They had planned to deliver the technology to clients.

How do fans feel about Static and the threat of Virule? Sound off in the comments! 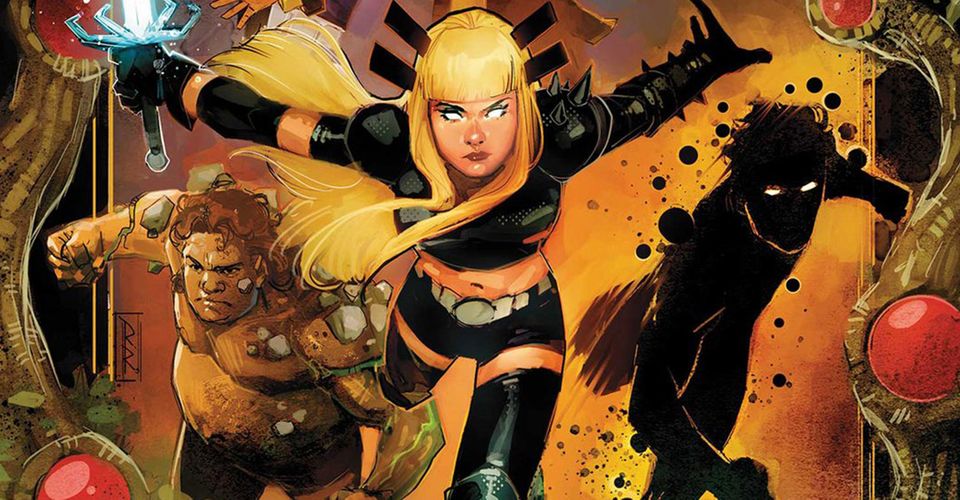 WHO ARE THE NEW MUTANTS?

“We are living in the sixth Age of Homo Superior, the Sextant!”

These are the words of Sunspot, leader of the mutant super-powered team, the New Mutants.

Sitting during our interview on the mutant island nation of Krakoa, I am mesmerized by the paradisiacal feel of it all! Lush verdure, breathtaking scenery and the sense of community where these young people, teenagers for the most part, are finally home.

Who are these New Mutants?

The New Mutants were originally meant to continue Xavier’s School For Gifted Youngsters after Xavier’s failure to protect his most beloved proteges, such as Jean Grey who later became the Dark Phoenix and died multiple times. They were a young team, bred by Xavier to hone their powers and integrate into a community.

Things have changed a lot since the 20th century for this group of super-powered beings once regarded as rebels, renegades and outcasts.

Since the modern period, the emergence of Professor Xavier and his X-Men and of Magneto and his Brotherhood of Evil Mutants, came the first wide-scale emergence of mutants on the Earth, as Mirage explains. Then, the mutant population exploded.

Mirage, leads the New Mutants with Sunspot. A mutant with the power to read minds and sense emotions, Mirage detailed her own struggle with the New Mutants, from losing her powers to an Asgardian goddess to being infected by the Transmode Virus which made her feel like a living computer virus!

Since Krakoa, however, everything has changed for the New Mutants. The Sextant, the Sixth Age of mutants has come and Krakoa has become the island nation-state for the mutant population where they feel welcome despite their difference and unique talents.

I left the New Mutants as they embarked on their new top-secret adventure in space. It is a way to continue a long body of work of space travel, missions around the world and yes… community work.

How do fans feel about the New Mutants? Comment below.