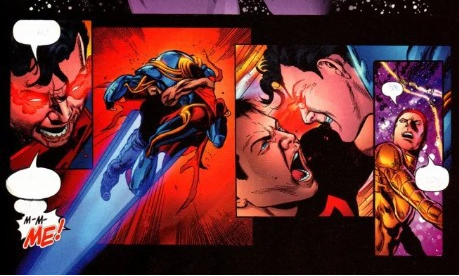 WHAT IS THE RETURN OF SUPERBOY?

During Infinite Crisis (2005-2006), the battle raged between Superboy and Superboy-Prime over who is the true Superman. Heroically, in a Superboy vs Superboy-Prime battle, Conner Kent sacrificed his life to destroy Alexaner Luthor Jr’s cosmic tuning tower.

Gloriously, Superboy returned to Smallville after his resurrection in mysterious circumstances. Let’s explain where the Post-Crisis Superboy fits in the new DC multiverse continuity.

SUPERBOY SACRIFICED HIS LIFE IN BATTLE AGAINST SUPERBOY-PRIME

In Infinite Crisis (2006) #6, Superboy and Superboy-Prime battled over who is the true Superman. During the battle, Alexander Luthor Jr. used his cosmic tuning fork to open a portal to the DC multiverse to create the perfect Earth, destroying all other Earths. In order to save the DC multiverse, Superboy flew himself and Superboy-Prime in a touchdown on the tower, destroying it. At the cost of his life, Conner saved the Earth from destruction.

Later, Superboy mysteriouly returned to Smallville to live with Clark Kent and Martha Kent at the farm. There, he enrolled at Smallville High and created a notebook about Superman’s most memorable actions. In addition, he rejoined the Teen Titans with Impulse.

A FAN OF THE DC UNIVERSE AT YOUR LOCAL COMIC SHOP OR LIBRARY IN ALBANY OR MELBOURNE TO ENTERTAIN YOURELF ABOUT #THEWORLDSGREATESTHEROES? TO #CELEBRATECOMICCON, CLICK ON GEOFF JOHNS’ FINAL CRISIS: LEGION OF THREE WORLDS #4 BELOW TO BUY ON AMAZON AND BECOME THE GREATEST SUPERBOY FAN.

SUPERBOY WAS RESURRECTED IN THE 30TH CENTURY

Post-Crisis, DC Comics was in a court battle for the Pre-Crisis Superboy character. By mandate, they could not use the Superboy name so they used the Clark Kent name in Legion continuity. For the Post-Crisis version, Superboy was actually resurrected in Legion of Super-Heroes continuity.

In the 30th century, Brainiac 5 of the Legion resurrected Superboy using the same Kryptonian technology that was used to reanimate Superman when he was killed by Doomsday along with Lex Luthor’s sample hair. Again, it was for helpto defeat Superboy-Prime and his Legion of Super-Villains.

Comic collector fan of the DC Universe to entertain yourself at Comic-Con Autograph and why Superboy is one the most popular superheroes? Click on Millennium Edition: Adventure Comics, Edition #247 below to buy the Silver Age Superboy comic on Amazon.