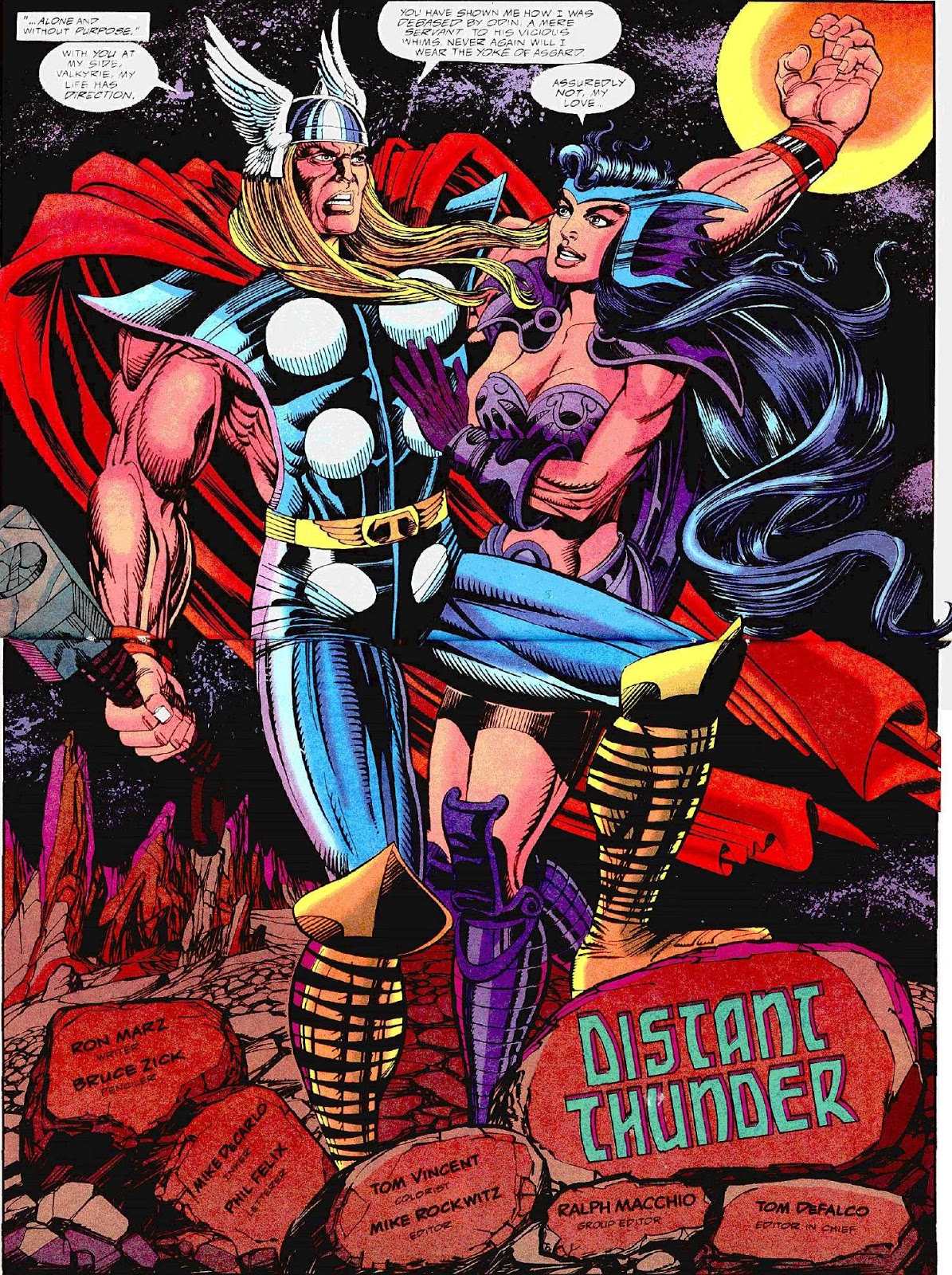 WHAT IS THE WARRIOR MADNESS?

Thor must search the universe for Galactus even if it takes an eternity. In ‘Thor’ (1996) #502, while waiting for the end of the Onslaught saga, Thor explains to Red Novell the chants he was intoning at night: Thor was trying to enter the Warrior Madness, though he did not succeed, which would increase his super strength ten-fold. However, the Warrior Madness is Berseker Rage and threatens Thor’s sanity.

THOR’S WARRIOR MADNESS WAS LOVE FOR THE MIND VALKYRIE

In ‘Thor’ (1993) #468, Odin has asked Thor to depart for the Heavens in order to seek peace after his recent trials. Odin is concerned about Thor’s well-being and wishes he were on Asgard. Elsewhere, Thor has gone mad and is talking to the Mind Valkyrie. She tells him that Thor has been misused and that he ought to seek revenge not only on Asgard, but also on the Nine Realms. Thor agrees and he talks frantically, he is observed from afar by Beta Ray Bill and Lady Sif, his betrothed. Beta Ray Bill counsels Lady Sif to stay away from Thor but she decides to intervene.

Lady Sif meets with Thor and Thor informs her he has found a new consort. As he points to the Mind Valkyrie, Lady Sif realizes there is no one there and Thor is talking to himself. Sensing foul, Thor hits Lady Sif. A battle follows between Thor and Beta Ray Bill. Seeing that he cannot protect her, Beta Ray Bill gives Lady Sif the Norn Stones and urges to flee to seek allies or even inform Odin. Lady Sif promises to return then she departs. Thor lands one more hammer strike on a befallen Beta Ray that shatters the asteroid. As the Thunder God is about to deliver a final blow, Silver Surfer arrives.

Visiting the area, Silver Surfer sees Thor as he is about to deal the final blow on Beta Ray Bill. A vicious battle ensues with a no hold-back Silver Surfer.

Seeing that Beta Ray Bill is gravely injured, Silver Surfer transports him to safety on his cosmic board. Finally, Thor emerges victorious. Silver Surfer is on the ground and as Thor is about to land the final blow, Adam Warlock and Pip the Troll arrive.

A FAN OF THIS BATTLE? CLICK ON “THOR: BLOOD AND THUNDER” BELOW TO PURCHASE THE COMIC ON AMAZON.

THOR WITH THE POWER GEM AND THE MIND VALKYRIE FIGHT DR. STRANGE, SILVER SURFER AND THE INFINITY WATCH

In ‘Thor’ (1994) #470, Thor possessed by the Warrior Madness is armed with the Power Gem and must fight Dr. Strange, Silver Surfer and the Infinity Watch on Asgard. The heroes arrive on Asgard and attack Thor and the Mind Valkyrie who has taken form. Thor is able to withstand the initial brunt while the Mind Valkyrie deals with the Silver Surfer’s cosmic shock. Then, with a powerful hammer strike, Thor turns the battle.

Sensing the seriousness of the situation, Dr. Strange and Adam Warlock attempt an attack. They deal the Thunder God “a karmic-mystic attack!”1 Though writhing in pain, Thor taps into the power gem and returns their attack through a feedback. Only the Silver Surfer remains standing. With a final hammer blow, Thor fells Silver Surfer. Sensing defeat, Pip the Troll teleports everyone to Thanos’ sanctuary.

SHOWDOWN ON ASGARD: THANOS VS ODIN

In ‘Thor’ (1994) #471, All-Father Odin helps cure Thor of his Warrior Madness. Thanos has imprisoned Thor in a cube of pure force and they have two hours before he is free. Odin sensing the threat to the Realm that Thor poses, inclines to destroy him. However, Dr. Strange intercedes and Adam Warlock tells him that Thor must be freed from his bondage. Once again, Odin plunges into Thor’s psyche.

He is transported before an imposing mountain. He climbs the mountain and finds Thor at the top, bound in chains. As Thor laments he has been there for a long time, Odin explains that the All-Father’s righteousness and his tampering with Thor’s soul in the past, have forged the chains. Odin breaks the chains. The Mind Valkyrie appears and states she is in her domain and Thor cannot be freed. Odin battles the Mind Valkyrie. Uneasy with the situation, Thor intervenes and defeats the Mind Valkyrie. Both Thor and Odin are transported back to Asgard. Thor thanks his friends and bids them farewell.

2 thoughts on “Marvel Day: In “Blood And Thunder”, Thor Succumbs To The Warrior Madness And Goes On A Rampage To Destroy The Nine Realms”