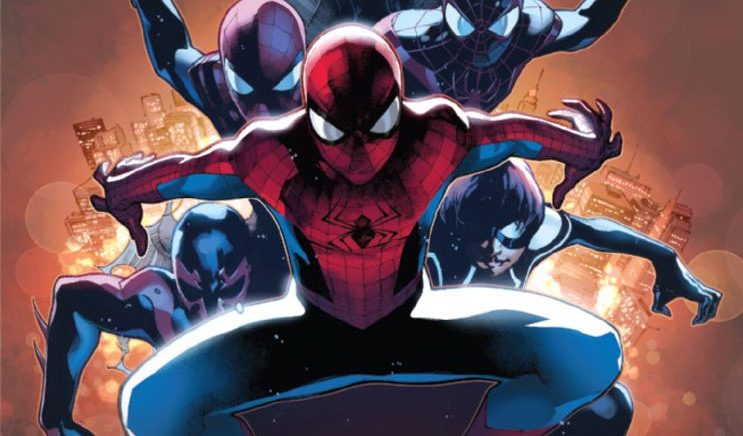 SUBSCRIBE TO RECEIVE NEWS, UPDATES ABOUT THE BATTLE RANKER AND WIKIS

From the beginning, the first five issues tell the origin story of Miles Morales to becoming Spider-Man. At first glance, an up-and-coming youth from a troubled family. In reality, Miles wants to do the right thing and make it up the ladder in life. Surprisingly, Miles wins the lottery into a New York charter school. However, when an accident occurs, Miles life is changed and he becomes the hero he was meant to be.

Without a doubt, the dialogue is appropriate for the audience and though Miles and Genke are teenagers, they are aware of the superhero lifestyle: the young, good guy gets powers, defeats bad guy, saves people and gets the girl. In fact, it sounds like a formulaic Hollywood story which gets amplified in the animated movie. What makes the story work is the diversity, strength and earnestness of the characters. In the end, Bendis’ work shines and he is able to play up the characters’ chemistry with precision.

Overall, this storyline is definitely recommended to read before or after playing Marvel’s Spider-Man: Miles Morales on PS4.

A FAN OF FASHION? CLICK ON THE ULTIMATE SPIDER-MAN T-SHIRT BELOW TO PURCHASE ON AMAZON.

“Spider-Verse” (2015) has to be one of the most satisfying Dan Slott’s runs on ‘Amazing Spider-Man’. Juliana Failde at CBR.com recommended the storyline in 10 Spider-Man Story Arcs Every Fan Should Read. It is the inspiration for the Golden Globe animated movie “Spider-Man: Into the Spider-Verse” with Miles Morales as the titular character.

In an interview with CBR.com, Dan Slott revealed his inspiration for the storyline. Creatively, Slottt was to tell his version of the plot from the video game “Spider-Man: Shattered Dimensions.” As matter of fact, it involved an artifact called the Tablet of Order and Chaos which threatened the lives of Spider-Man, Spider-Man Noir, Ultimate Spider-Man and Spider-Man 2099.

“Spider-Verse” is more a Peter Parker story than a Miles Morales story. The crossover event is ambitious and features the Spider-Men from the Marvel multiverse across continuity. There are touching and bonding moments. Though Spider-Man and Miles Morales have few panels together, their moments are bonding times. Spider-Man emerges as a leader capable of leading a team on a multiversal scale and Miles is a functional member of the team.

Anyone looking for a Miles Morales’-centric storyline would be misguided from the video games and the animated movies. At the same time, this is a crossover event not to miss out.

A FAN OF FASHION? CLICK ON “Marvel Spider-Man Into the Spider-Verse Red Icon T-Shirt” BELOW TO PURCHASE ON AMAZON.

Previously, Sara Pichelli collaborated her art with Bendis on ‘Unltimate Comics Spider-Man.’ The two collaborate again on this series. Similarly, Pichelli’s pencils and inking translate well on digital printing. In truth, they lend to the Ultimate line of Marvel comics which pushes the envelope, upgrades superheroes and supervillains and at the same time caters to a younger audience. In the end, Pichelli’s pencils and ink are rough, not very expressive and to the point.

Overall, “Spider-Men” stands out mostly because it is focused, a-propos and serves to grant legitimacy to the new Ultimate Spider-Man, none other than Miles Morales.

A FAN OF FASHION? CLICK ON THE AVENGERS HULK SPIDER-MAN T-SHIRTS BELOW TO PURCHASE ON AMAZON. 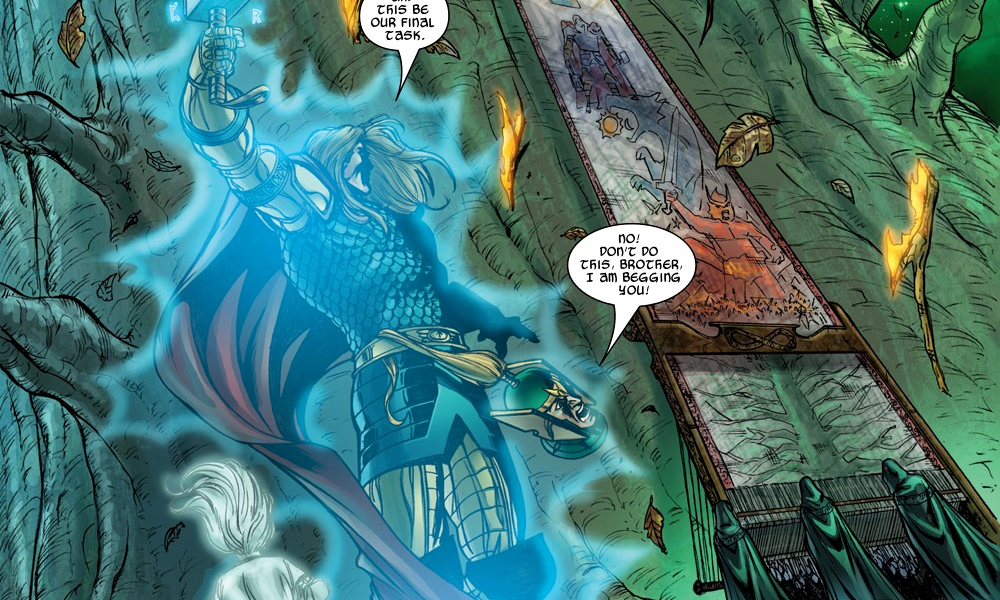 “Thor Disassembled: Ragnarok” is Michael Avon Oerming and Daniel Berman’s run on ‘Thor’ in 2004 on the eve of “Avengers: Disassembled”. As the Avengers team is torn apart by the threat of an out-of-control Scarlet Witch, Thor and Asgard are destroyed by Ragnarok, where Loki has raised an army and destroyed Mjolnir, Thor’s hammer, in order to destroy and to rule Asgard.

You will notice that the lettering is very traditional and the storyline plays like a classic Norse/mythological story in the first three issues. The last three issues bring together the best elements of Thor lore and leverage Thor’s superheroism on Earth in order to solve the crisis. Perhaps one of the most significant events in the “Avengers: Disassembled” crossover event as it shakes up the Thor and Asgard status-quo that results in a significant power-up for the God of Thunder.

There are lots of dialogue, descriptions and splash action pages. There is a sense of seriousness and of the belief that the warriors are seeking glory. The first three issues are mostly exposition and descriptions of Loki’s conquests, the destruction he caused and the casualties on Thor’s army and allies. The bulk of the action occurs in the last three issues. Thor manages to solve the crisis at great personal cost and ascends to a higher level of magical power. In some sense, Thor repeats All-Father Odin’s actions and also manages to fulfill his destiny. What works best is that here, Thor, represents the best of both God and man and ends up saving Asgard.

This storyline is definitely very reverent of Norse religion though at the same time, it plays up Thor’s godhood and comments heavily on the somber path of destruction created by Loki across Asgard. This is definitely a must-read for Thor fans.

A FAN OF THIS STORY? CLICK ON “THOR: RAGNAROKS” BELOW TO PURCHASE THE COMIC ON AMAZON.

C.B. Cebulski and Greg Tocchini’s 2004 on Thor, was a prequel series titled ‘Thor: Son of Asgard’. The series was a new origin story about Thor’s early years to Thor becoming worthy. The series originally set as a six-issue series before popular demand turned it into a 12-issue series. The series looks at the changes to Balder’s origin and how he received his enchanted sword in the six-issue “Warriors Teen” storyline, Lady Sif’s warrior training in the three-issue “Enchanted” storyline, and Thor finally lifting Mjolnir in the three-issue “Worthy” storyline.

‘Thor: Son Of Asgard’ succeeds as a work of comic book mythology. Asgard appears as a place of fantastic magic where locales change as suddenly as extreme climate conditions. The series set the foundation for the renewed interest in Thor and helped define why the character is not so much a god, as he is a hero. It is Thor’s heroism that shines and in some ways, he supplants Odin’s omniscience in order to finally become worthy.

One of the typical Marvel books where heroes are presented with hubris: Thor’s warrior and son pride gets him into trouble as he constantly tries to prove himself to Odin, Lady Sif proves to be jealous which causes an initial rift with Thor – something that is resolved at the end of the “Enchanted” storyline -, Odin’s reliance on his omniscience blinds him on matters of the heart. It would seem Balder does not suffer from these defects and appears to balance rationality, warrior spirit, strategy and love.

This is certainly a worthy addition to your Thor collection, with a blend of adventure, action, magic, suspense, romance and the threat of war.

A FAN OF THIS STORY? CLICK ON ‘THOR: SON OF ASGARD’ BELOW TO PURCHASE THE COMIC ON AMAZON.

Joe Straczynski’s 2007 run on ‘Thor’ attempted to re-define the character. A costume re-design, a completely new setting in Oklahoma with a move to restoring Asgard and its people dead after Ragnarok and a prelude to the Marvel Civil War. Straczynski presents to us a Thor that does not smile, that is powered by the faith of humans and who seeks to find his path on Earth. It is not Thor the God of Thunder that is emphasized, but Thor the superhero.

In a battle against Iron Man, Thor no longer holds back. His power unleashes the fury of the elements on Iron Man who, defeated, opts to grant Thor and Asgard diplomatic immunity in Oklahoma. The pacing of the stories is quite slow and much of the plot points are involved with politics, Balder’s new status, and Asgard’s awkward relationship with Earth. Though the pacing is slow, it does work when concerned with Loki’s dark and evil plan to oust Thor out of Asgard in issues #7-12.

Though the art is gorgeous and the writing tight, the storyline begs the question whether we needed the new Thor rebirth. Thor works best as space opera, as the cream of Marvel’s crop that does not shy against showing unrelenting power. Though this version of Thor exemplifies these aspects, it lacks in heart and humanity, as many of the characters are not explored, and the plot points do not move forward at a satisfying pace. It appears, here, that Thor has not fully grown into his role as King of Asgard and his inexperience is clouding his judgment.

Straczynski’s run did succeed in re-defining ‘Thor’ though the run did not succeed in producing any lasting effects in contribution to Thor’s storyline. There may be too much of a parallel with DC’s Superman.

‘Thor: Ages of Thunder’ is part of a delving into Thor’s past during Straczynski’s run as the God of Thunder attempts to locate the missing Asgardians.

Thor’s history with the Frost Giants is well-documented in Norse mythology. In the trade paperback, thanks to Thor’s power and heroism, Asgard has just won Ragnarok against the Frost Giants. While the Asgardians celebrate in revelry, Thor retreats to his quarters with the golden apples, the source of the Asgardians’ immortality. Here, Thor is presented as distant, cold and a womanizer.

What makes this comic work is the back-story presented on Enchantress. The story explains some of the mishaps that befall Enchantress and Thor’s heroism. Odin is depicted as powerless and ineffectual, different from his classic omniscient and omnipotent showings. At the same time, there is a growing rift between Odin and Thor that bodes evil. Finally, the lack of powerful and strong female heroines show a lack of depth. Enchantress is given very little dialogue and is depicted as the perfect woman though a damsel in distress.

Though the art is gorgeous and the pacing good, the storyline lacks depth though it makes important additions to Thor’s mythos such as a backstory on Enchantress and her important role in the Asgardian pantheon. The comic plays mostly as filler and does not add any significant development to Straczynski’s run in 2007.

A FAN OF THIS STORY? CLICK ON “Thor: Ages of Thunder” BELOW TO PURCHASE THE COMIC ON AMAZON.

CHECK OUT THE STORY: IN “ENTER THE PHOENIX,” THE THUNDER GOD ATTEMPTS TO END GLADIATORIAL COMBAT BUT BECOMES THE SON OF A MONSTER WITH A DEVASTATING ORIGIN STORY.

‘Thor: Blood Oath’ reads like a friendly adventure through the nine worlds. When the Warriors Three accidentally kill a Giant that had changed into a sea creature, Thor has a premonition and flies to Thingvellir to witness their judgment. Solidary with his brothers, Thor is sentenced by the Giants to retrieve some magical items over the Nine Worlds.

The series is full of jest, camaraderie, fun and action. Hercules makes a surprise appearance in issues #3 and #4 battling Thor in humiliation. The series continues from the Donald Blake story arcs and includes Thor as Donald Blake building his relationship with Jane Foster. In a sense, it is Thor’s connection to humanity that is shown.

Though ‘Thor: Blood Oath’ does not add anything new to Thor’s story or mythology, it is a nice addition to Thor comics.

A FAN OF THIS STORY? CLICK ON ‘THOR: BLOOD OATH’ BELOW TO PURCHASE THE COMIC ON AMAZON.