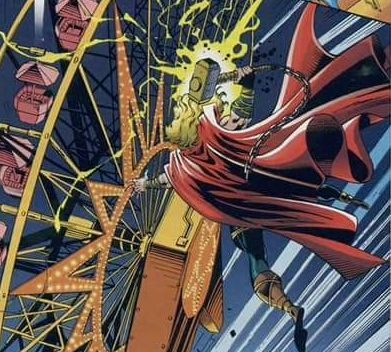 IN THE CANCERVERSE, DEATH APPARENTLY KILLS EVERYONE AFTER A NECROPSY RITUAL

To begin, in Thanos Imperative (2010) #1, the forces of the Cancerverse launch an attack on the Earth-616 universe. Particularly, their objective is to locate Thanos, the Avatar of Death. As matter of fact, their objective is to rid the Earth-616 universe of the concept of Death. In Thanos Imperative (2010) #6, the Guardians of the Galaxy attempt to stop Mar-vell’s necropsy ritual.

In the Cancerverse, Thanos has willingly agreed to the ritual. Aided by the Revengers, Mar-Vell successfully summons Mistress Death. However, she kills all of the inhabitants of the Cancerverse. In reality, Thanos planned the scheme. And when Mistress Death refuses to claim his soul, he vows to destroy the universe.

INTERESTED IN THIS COMIC? CLICK ON Guardians of the Galaxy Vol. 4: Original Sin BELOW TO BUY the PAPERBACK comic.

IN THE CANCERVERSE, DEATH DOESN’T EXIST

In Guardians of the Galaxy Vol. 4: Original Sin, the Guardians of the Galaxy and Thanos are trapped in the Cancerverse. Moreover, the Guardians possess the Cosmic Cube which Thanos plans to use to free himself. During a battle, Star-Lord impressively kills Thanos with the Cosmic Cube. However, Thanos comes back to life and punches him throuh the abdomen. Eons ago, the Many Angled Ones used Mar-Vell’s cancer to rid the Earth-10011 of Death. In a necropsy ritual, the embodiment of Death was annihilated.

Then, it became the Cancerverse. As a result, in the Cancerverse, every life form is a cancer. As you known, unless irradiated, cancer cells multiply continuously, don’t undergo apoptosis and are effectively immortal. Moreover, Death does not exist there. For this reason, Mistress Death could not claim Thanos. In fact, even the Revengers killed by Death, came back to life. Here, Mistress Death cannot claim souls and her powers extend only to the Earth-616 universe.

On his brow, Black Bolt has a metallic fork-shaped antenna. In order to channel his particle and electron super powers, Black Bolt focuses them with his antenna. Let’s look at how Black Bolt’s chief super powers extend to the Galaxy Level.

Definitely, Black Bolt demonstrated a Galaxy Level of Energy Projection since he was able to overload Doctor Doom’s storage battery.

In ‘Marvel Two-In-One Annual’ (1979) #4, Black Bolt performs an incredible feat. During a battle against Graviton, Black Bolt has to stop a solar flare from striking the Earth. Incredibly, Black Bolt uses his electron manipulation powers to stop the solar flare.

In ‘War of Kings’ (2009) #1, Emperor Vulcan is at the head of the Shi’ar Empire. Meanwhile, Black Bolt rules the Kree. In a declaration of war, Vulcan attacks the Kree. During an all-out war, Black Bolt attacks Gladiator and briefly overpowers him. In the meantime, White Noise has to put an end to the fight.

In order to stop the Devourer of Worlds, Doctor Strange assembles a coalition of mages and cosmic heroes. Together, they battle the Star God. Though, their efforts are futile. Indeed, Galactus will not be conquered.

Alone, Black Bolt steps forward. Moreover, amped by magic, he delivers a powerful sonic scream. Incredibly, the sonic scream staggers Galactus. At a time when Galactus did not have his jobber aura, he was still a cosmic force.

In The Last Galactus Story: Chapter Seven (1985), a sated Galactus once survived the gravitational force at the core of the Milky Way galaxy. Definitely, considering the incredible durability, Black Bolt performed a Galaxy-Level of Energy Projection.

Definitely, Black Bolt is as powerful as a herald of Galactus. Let’s list the Top 4 heralds in terms of energy manipulation.

After a gamma ray explosion, Bruce Banner transforms into the Hulk. Returning from space for more power, Surfer ends up fighting the Green Behemoth. On Silver Surfer’s surfboard, they end in space. There, Surfer has the idea of absorbing Hulk‘s gamma ray radiation. Afterwards, Hulk reverts to Bruce Banner.

Eventually, Surfer breaks the space barrier. However, the Sentinel of the Spaceways has to return to Earth to save Bruce in free fall, who fell off Surfer’s surfboard. Finally, Surfer has to return Bruce’s gamma power to save him, transforminging him into the Hulk. In the end, the Silver Surfer is again trapped on Earth.

In “The 10 Most Powerful Heralds of Galactus, Ranked”, Chris White at CBR.com ranks Stardust number three. Namely, Stardust was the last surviving member of his race known as the Etherals. In fact, these were beings of pure energy. Named Lambda-Zero, she became Stardust, a ruthless and murderous herald of Galactus.

In ‘Stormbreaker: The Saga of Beta-Ray Bill’ (2005) #4, Stardust and Beta-Ray Bill engage in a cosmic clash over Galactus’ attempt to feed on New Korbin. In order to assist in her struggle, Stardust summons Asteroth. When the demon causes untold damage, both fighters agree to battle field remove it.

Uncannily, one of Stardust’s super powers with the Power Cosmic is to open portals to black holes. In order to BFR Asteroth, Stardust opens a portal to a black hole. Though, the ploy fails and both Stardust and Beta-Ray Bill begin to be sucked in.

In the end, they are saved by Alpha Ray who drives the evil spirit into the black hole.

In ‘Silver Surfer’ (1987) #9, Nova and Silver Surfer have to save Galactus from the Elders of the Universe. In a grand scheme, they have built a device powered by the Soul Gems to destroy Galactus. Mischievously, they have kidnapped Shalla Bal and Mantis in order to lure the Silver Surfer. In exchange for the women’s freedoms, Surfer hands over the Soul Gem.

However, the Grandmaster sends the women in a ball of energy that will explode if touched. Unfortunately, Norrin manages to save only Shalla Bal. Angrily, the Surfer vows to make them pay and departs to save Galactus. Meanwhile, the Elders of the Universe have activated their machine which is slowly killing the Devourer of Worlds.

Under Surfer’s direction, Nova triggers a star to collapse into a black hole. Miraculously, Galactus can recover by feeding on the energies. Meanwhile, some of the Elders and the Soul Gems are sucked into the black hole.

Definitely, a feat requiring a high end energy manipulation. On a scale, it requires the power output of a galaxy within seconds. Without a doubt, a Galaxy Level of Energy Projection.

In ‘Avengers’ (1989) #302, Firelord removes the flames off Invisible Woman’s construct in re-entry. Considering Firelord withstood heat from re-entry, this is both an energy projection feat and a durability feat.

Round 1: Match-Up #18, we have Etrigan The Demon vs Nova alias Richard Rider. 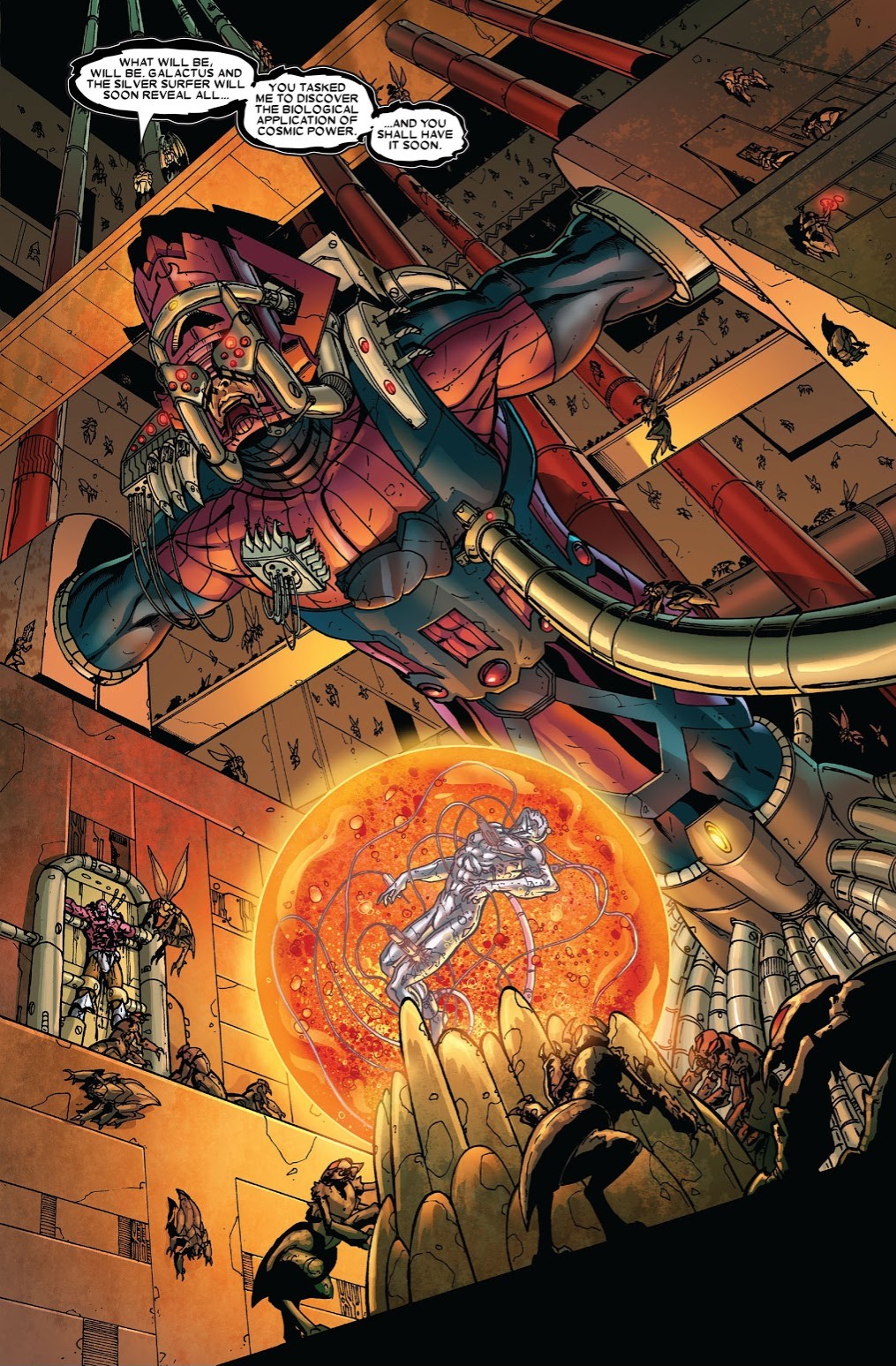