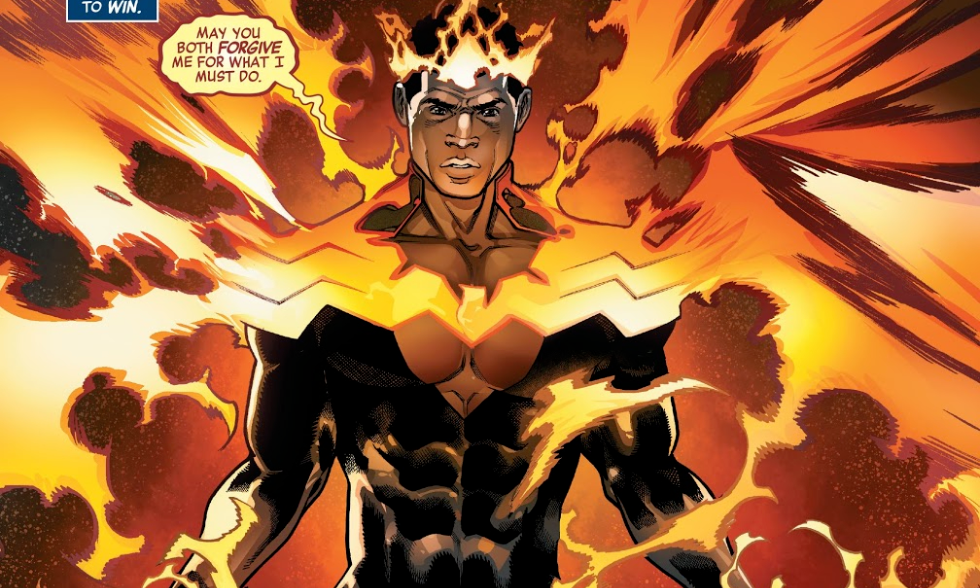 Today, Black Panther: Wakanda Forever releases with great celebration and excitement for the general audiences and for the African-American public.

With the passing of Chadwick Boseman, the torch has been passed to Letitia Wright who takes up the mantle of Black Panther in the titular role of Shuri. Though the heroine has yet to prove her feats similar to the comic, we will compare only T’Challa to Captain America.

In fact, since the Silver Age, the Black Panther-Captain America rivalry has taken on new heights. Indeed, many of their encounters involve Captain America infiltrating Wakanda on political missions or covert operations.

In most battles, the King of Wakanda has won though Captain America has held his own. With “Enter the Phoenix”, Phoenix-powered Captain America and Black Panther are the finalists in the Phoenix’s gladiatorial combats to become the entity’s next host.

Let’s look at how Black Panther’s martial arts and Captain America’s super soldier serum match against each other across various media.

In the end, Black Panther wins the battle though the mission is a failure.

POPULAR SCIENCE FAN OF MARVEL ENTERTAINMENT AT THE MOVIE THEATER IN NEW YORK TO ENTERTAIN YOURSELF ABOUT #THEMOSTPOWERFULHERO? CLICK ON AVENGERS BY JASON AARON VOL. 8: ENTER THE PHOENIX BELOW TO #CELEBRATECOMICCON AND BUY THE PAPERBACK COMIC.

Really, Black Panther (2018) may be the most celebrated Marvel movie with the greatest cultural impact. Indeed, “Wakanda Forever” has become the popular motto of entertainers and fans alike celebrating African-American culture.

Perhaps, one of its least celebrated moments is the rhino scene during the final battle of the movie. When T’Challa returns to challenge Killmonger, he dons the suit and faces the Wakandan army. Powerfully, he tamed a white rhino stampeding.

Importantly, a white rhinoceros can weigh up to 2400 kg and stampede at 13.8582 meters per second. With a kinetic energy of 230459.648688 Joules, Black Panther performed a Room-Level feat that is well above Captain America’s strength-level.

In the final battle, Captain America shows why his combination of strength, sill and fighting spirit is unmatched in the Marvel Cinematic Universe. Importantly, Iron Man is at least a 10-tonner since he is able to move the turbines of the Helicarrier.

Gloriously, the Star-Spangled Banner withstands Iron Man’s barrage of punches and array of technology, in order to final overwhelm him with his superior fighting skills. As F.R.I.D.A.Y. states, Catain America is the best hand-to-hand fighter in the Marvel Universe who later triumhs over Tony.

Though, unlike Black Panther killing Killmonger, Captain America does not land Tony the killing blow with his shield.

COMIC: IN ENTER THE PHOENIX, BLACK PANTHER CLAIMS HE CAN KILL THE PHOENIX

VISIT Marvel Day: In “Enter The Phoenix”, The Thunder God Attempts To End Gladiatorial Combat But Becomes The Son Of A Monster With A Devastating Origin Story for the Phoenix’s gladiatorial combats.

Importantly, Black Panther claims during the series that he has the power to kill the Phoenix. As a martial artist, Black Panther is also a great mystic who can commune with supernatural forces.

For the most part, Black Panther and Captain America are portrayed as equals. Importantly, T’Challa has the advantage in strength, speed and is the deadlier fighter. Both fighters are protected by Vibranium as the Captain has a Vibranium Shield and the Black Panther Habit is powered by Vibranium.

SEE Metropolis Battles: Black Panther vs. Captain America for our ratings. See our updated ratings below. 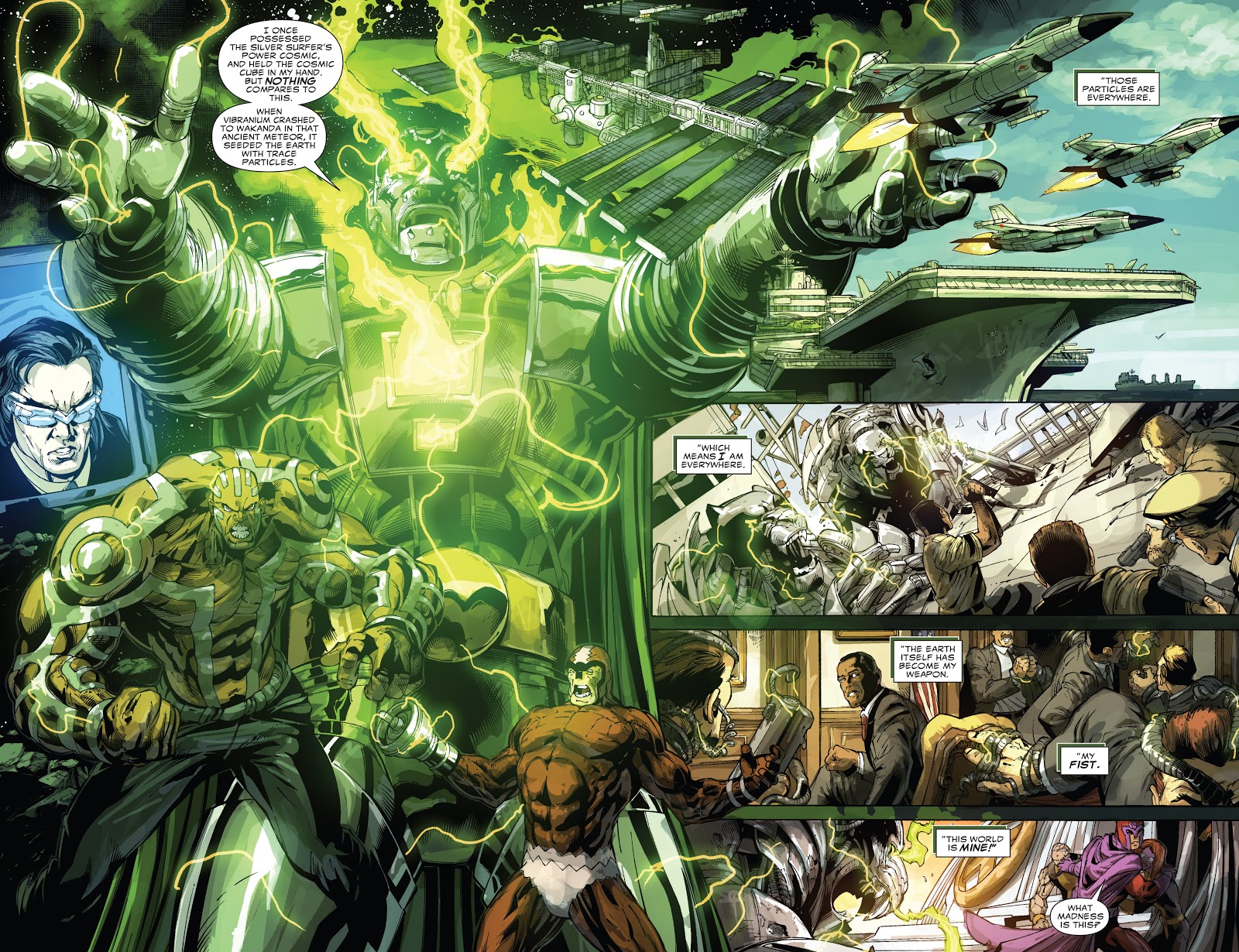 BLACK PANTHER, SHURI AND THE DORA MILAJE ARE FUGITIVES FROM THE DESTURI COUP IN WAKANDA

In ‘Doomwar’ (2010) #1, T’Challa and Shuri, the Black Panther, has lost his royal title and is a fugitive from Wakanda. The Desturi have seized Wakanda’s government and have sentenced the Queen, Storm of the X-Men, to death. T’Challa has fled Wakanda to seek help from the mutant nation of Utopia.

In Utopia, T’Challa arrives with Shuri and the Dora Milaje to explain the circumstances of recent events. In the past year, T’Challa had been tracking rumors of a dissident group called the Desturi. They are a fundamentalist and xenophobic group that had infiltrated all levels of government.

T’Challa found they had access to surveillance but had no leads. Until he was lured into a trap by the mastermind of the coup d’etat, Doctor Doom, who nearly killed him. Later, T’Challa found Doom had infiltrated the palace food and water supplies with nanites swarms. Fearing that everyone he cared for could have been turned into living spy cameras, T’Challa fled Wakanda with Shuri and the Dora Milaje.

White Queen questions about Doctor Doom’s purpose of the revolution. T’Challa responds that its purpose is to obtain the Vibranium supply of Wakanda to upgrade his armor and become the most powerful force on Earth. Cyclops as Head of Utopia, cannot sanction an open war with Wakanda. However, some X-Men willingly volunteer.

DURING T’CHALLA’S AND THE X-MEN’S ATTACK ON WAKANDA, DOCTOR DOOM STEALS ALL OF WAKANDA’S VIBRANIUM

In ‘Doomwar’ (2010) #2, T’Challa and his army attack Wakanda. Wakanda is the most advanced nation on Earth. T’Challa’s army arrive on Wakandan soil and are greeted by the army and the head of the Desturi. Asking the Desturi government to surrender, T’Challa and his army declare themselves to be Wakanda. Suddenly, Nightcrawler teleports T’Challa and Black Panther into the Palace. Despite Nightcrawler’s opposition, Black Panther massacres the people in the Palace.

T’Challa arrives at the Vibranium Vault and finds Queen Ororo bound in fetters by Doctor Doom. Doctor Doom gives T’Challa five seconds to give him the key to the final lock or else he will kill Storm. He has to choose between saving the Vibranium and saving Storm. T’Challa does not hesitate and decides to protect the Vibranium.

The countdown ends and Doctor Doom relishing the game, does not kill Ororo. Doom teleports in a flash of lightning. Entering the Vault, T’Challa finds out that all of the Vibranium is gone. Checkmate!

A FAN OF THIS BATTLE? CLICK ON “DOOMWAR” BELOW TO PURCHASE THE COMIC ON AMAZON.

In ‘Doomwar’ (2010) #3, Doctor Doom wages his “Doomwar” using Vibranium. In order to unlock the final lock, Doctor Doom had to face Bast, God of Egypt and Panther God of Wakanda. Bast scrutinizes Doctor Doom’s spi; and asks him his motivations for taking Vibranium. The test is purity and if Doctor Doom lies, Bast will devour him.

Doctor Doom tells Bast that though his methods are cruel and villainous, he has purity of intention. Doctor Doom claims mankind is a predator species and that according to his purity, he is a saint. He has gazed into thousand futures, a hundred thousand futures and found that the only future where humanity survives extinction and is at peace is under Doctor Doom‘s rule on Doomworld. Bast, though he finds Doctor Doom’s methods abhorrent, passes Doctor Doom and let’s him have the Vibranium.

THE DOOMWAR BEGINS WITH CASUALTIES ON ALL SIDES

In ‘Doomwar’ (2010) #4, the “Doomwar” over Vibranium begins on a global scale. T’Challa has recruited the Fantastic Four to assist him. Using Vibranium trackers, T’Challa has tracked locations of Vibranium supply at Doombases over the world. Shuri, the Dora Milaje, Invisible Woman, Thing, Human Torch and the X-Men are on the frontlines. When they arrive at the first Doombase, they are unable to destroy the Vibranium-enhanced Doombots. Then, arming themselves with Vibranium-enhanced armors and weapons, T’Challa’s army begins to take down Doombots.

However, there are enormous casualties on both sides. In ‘Doomwar’ (2010) #5, T’Challa and his army suffer great casualties with one third of the Dora Milaje having fallen. However, they have managed to take down only eight percent of the Doombases. T’Challa recognizes that Doom has learnt everything about Vibranium technology and his people is facing extinction. In order to eliminate the threat, he turns to shadow physics. T’Challa invented the discipline to unite quantum science with alchemy. T’Challa’s plan is to send Deadpool and the Midnight Angels to Latveria in order to assassinate Doctor Doom.

Later, Shuri’s team has located one of Doom’s computers. Hacking into the system, they divert all his funding to humanitarian causes.

The Broker who has been running the Doomwar, realizes this and fears Doom will kill him.

IN SYMKARIA, T’CHALLA FINALLY OUTSMARTS DOOM WITH SHADOW PHYSICS BY USING A TRIGGER THAT RENDERS ALL PROCESSED VIBRANIUM INERT

In ‘Doomwar’ (2010) #6, T’Challa finally outsmarts Doctor Doom by rendering all processed Vibranium inert. In a communication with Black Panther, T’Challa informs her that he has sanction a shadow attack of Latveria by the Midnight Angels which cannot be traced. She does not approve T’Challa bypassing her authority and reminds him that Wakanda does not start wars. Doctor Doom’s armor upgrade is finally online and he is able to sense and to tap all the Vibranium which is present everywhere on Earth.

T’Challa is in communication with other scientific and mystical leaders on Earth: Beast, Hank Pym, Tony Stark, Charles Xavier, Doctor Strange and Doctor Voodoo. They inform T’Challa that all Vibranium objects on Earth have come to life. Since the act leads back to Wakanda, and the threat of a nuclear war looms, they refuse to help T’Challa. Deadpool and the Midnight Angels attack in Latveria but they are no match for Doom. In diplomatic mission to Symkaria, Shuri invites Doctor Doom to come face T’Challa’s army to settle the matter.

The final battle begins. T’Challa’s army is overwhelmed by Doom’s army. During the battle, T’Challa is seemingly defeated by Victor. However, T’Challa finally outsmarts Doctor Doom. He activates a trigger that uses shadow physics to render all the processed Vibranium on Earth inert.

Shuri who had wanted to kill Doom, relents. She promises that she will hunt over the Earth and kill him if he steps foot on Wakandan soil. In the end, Black Panther and Storm watch as the superhero community helps them re-build Wakanda. 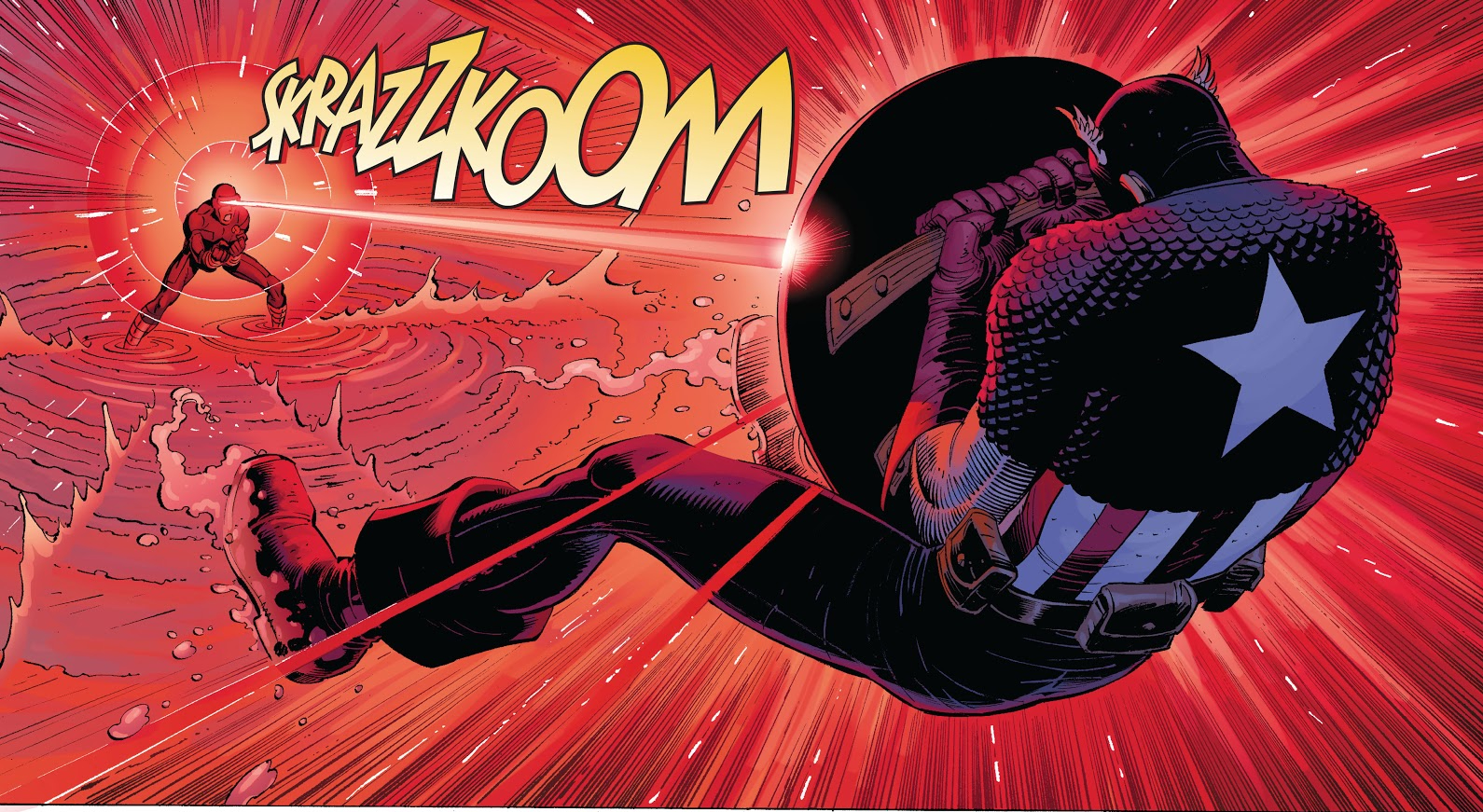 In ‘Avengers vs X-Men’ (2012) #1, titled “Avengers vs. X-Men (Part One)”, Cyclops performs an energy projection feat. Captain America arrives on Utopia to take Hope Summers into protective custody over her being the Phoenix’s new host. Initiating the fight, Cyclops knocks back Captain America with an optic blast.

How much energy projection does it take for Cyclops to knock back Captain America with an optic blast?