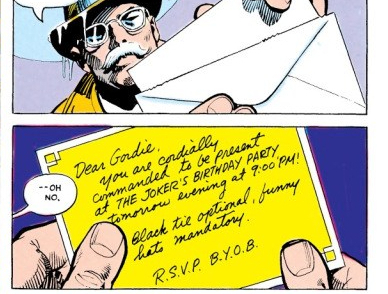 In ‘Batman’ (1980) #321, Joker sends Commissioner Gordon a letter with no return address at the GCPD gassed with Joker Venom. The letter is an invitation to Joker’s birthday celebration with the etiquette being “black ties optional, funny hats mandatory.”1 Immediately, the police officers at the precinct start laughing and fall on the floor.

Joker makes his clown entry into the GCPD precinct. He asks for “a rousing round of applause.”1 At this time, Batman swings around the precinct perimeter. Noticing the hysteria around the building he concludes Joker has used Joker Venom and equips himself with a respirator. Then, he crashes into the precinct window.

Batman quickly fights Joker’s henchmen remarking that Joker still hires muscle men that are “inept.”1 He makes short work of them, but notices Joker has escaped. Batman runs out on the street and sees the Jokermobile with Joker escaping with Commissioner Gordon. Batman laments that he hasn’t “got a prayer of catching them.”1 The police officers exclaim that the Joker has got Commissioner Gordon “too.” Batman finds out from them that he was called because earlier the Joker kidnapped Robin in New Carthage.

Switching to Bruce Wayne’s penthouse, Alfred who is hosting Selina Kyle a.k.a. Catwoman and Lucius Fox, notices footsteps on the roof and thinks it is Batman. Instead, there is an explosion. Joker and his henchmen arrive. Catwoman attempts to fight off Joker but is knocked out by Joker’s boxing glove sprawling from a bouquet of flowers. Joker and his henchmen escape with Alfred aboard his balloon. Batman arrives on the scene, wakes Selina Kyle and greets her.

CHECK OUT THE STORY: THE METAL MEN’S FIRST MISSION

In the Clown Prince of Crime’s “hidden Ha-Hacienda”, Joker reveals to his captives his extravagant plan for his birthday celebration.1 Joker sets up his “victim-go-round” to kill all his sworn enemies “while all Gotham City watches” as celebration for his birthday.1

As Joker revels in his plan, his henchmen laugh with him, save one called Sidney. He intimidates Sidney and then shoots him with a spear-gun that shoots the message: “BANG You’re Dead.”1 Robin shocked by the Joker’s sick jokes exclaims he is out of his mind.

Robin asks Joker where he will find an audience willing to watch the murder. Joker shows “the late edition” of the Gotham Gazette.1 It contains an invitation to the Harlequin Baking Company to see its wares.

Batman watching individuals on the street deciding to go to the event notes “the Joker has finally made his first mistake” since the Harlequin Baking Company doesn’t exist.1

Sign up for my newsletter to receive a free copy.

A crowd gathers at the Harlequin Baking Company. As the crowd congregates and sits down, Joker gasses them with Joker Venom. Lights go out. Then, Joker appears with his captives on stage. Each is tied to an incendiary candle on a cake. Once Joker presses the detonator in front of him, each “will burn brightly”, Joker will make a wish then blow them up.

Batman arrives and surrenders to the Joker in exchange for the captives’ lives. Joker says he lied, ties Batman to an incendiary candle. However, Batman ejects himself by pressing a button since he rigged his candles incendiary jets, unties himself and throws his batarangs at the captives’ ropes. Meanwhile, Joker presses the detonator. The captives are saved in time. Robin goes after Joker’s henchmen. Batman goes after Joker who escapes.

BATMAN DUELS WITH JOKER ON A GETAWAY BOAT

With the Joker no longer helming the wheel, the boat is out of control, headed for the shoals. Batman attempts to convince Joker to abandon ship, only to fall into the waters tricked by Joker’s “phony-hand-up-the-sleeve gag.”1 The duel ends up in an explosion. Batman survives only to hope with Robin and Commissioner Gordon that it is the last of the Joker.

“There’s a force out there we’ve never met. There’s going to be a war between hope and despair. Love and apathy. Faith and disbelief. When I was outside of time, I felt their presence. I tried to see who it was. I couldn’t, but I know they’re out there. And they’re waiting to attack again for some reason. I can feel it. Even now, Barry… we’re being watched.”