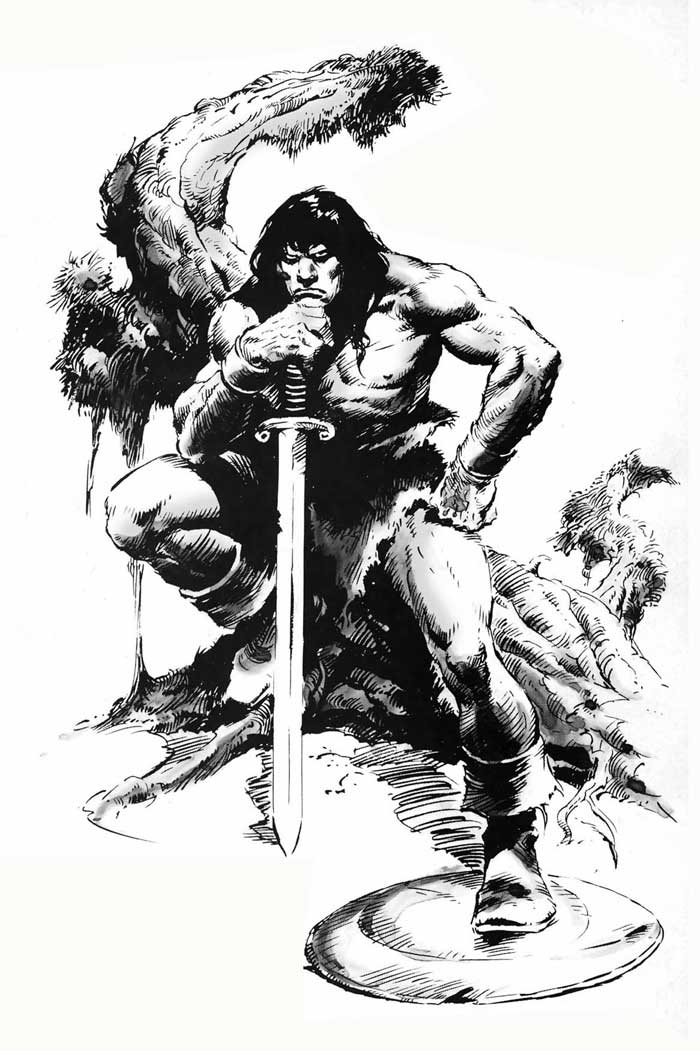 “Know, O Prince, that between the years when the oceans drank Atlantis and the gleaming cities, and the years of the rise of the sons of Aryas, there was an age undreamed of, when shining kingdoms lay across the world like blue mantles beneath the stars… Hither came Conan the Cimmerian, black-haired, sullen-eyed, sword in hand, a thief, a reaver, a slayer, with gigantic melancholies and gigantic mirth, to tread the jeweled thrones of the Earth under his sandaled feet.”
– The Nemedian Chronicles

Today, we talk about war! War is a fact of life, a tale of glory, a battle for power and no one embodies this more than Conan the Barbarian.

“It may sound fantastic to link the term ‘realism’ with Conan; but as a matter of fact – his supernatural adventures aside – he is the most realistic character I ever evolved. He is simply a combination of a number of men I have known, and I think that’s why he seemed to step full-grown into my consciousness when I wrote the first yarn of the series. Some mechanism in my sub-consciousness took the dominant characteristics of various prize-fighters, gunmen, bootleggers, oil field bullies, gamblers, and honest workmen I had come in contact with, and combining them all, produced the amalgamation I call Conan the Cimmerian”.

Conan is a warrior-born who was born among the Cimmerians who migrated east of Atlantis some time before it sank to the ocean and was destroyed. Conan is a warrior-born as said, and was actually born on a battlefield between the Cimmerians and the Vanir. Conan’s father and his tribe encircled Fialla, his mother, as she was giving birth to Conan. This was an omen that Conan would become a great warrior.

Before the age of seven he crippled Donal, a bully in his own tribe, who was much older and bigger than himself. By age eight he was wielding an ax well enough to chop firewood for the tribe, and he was also training with the longsword, spear, and dagger. He was officially accepted as a man of the tribe that year when he rescued the tribe’s war chief from a hungry pack of wolves – killing one of the wolves with his bare hands and teeth in the process!

Conan eventually became a fighter, a mercenary, a thief, and a King wandering exotic and supernatural lands during the Hyborian Age. (Conan)

Conan is an expert hunter, unarmed combatant, swordsman, horseman and archer. He is one of the most accomplished swordsmen in the Hyborian Age. (Conan)

Conan has a high level of strength, speed, and agility for a human and is able to lift very large objects. He has dealt over the years with magicians, sorcerers, and witches and has built a resistance to magical spells. He is also a master tactician who is able to lead armies into battle. (Conan)

Conan is a warrior-born, one born from battle lust, supernatural power, and the desire to conquer. He exemplifies the power to overcome the human condition with physical power and intelligence.

Episode 15: Savage Sword of Comics! (Or, Conan vs. Sequential Art)