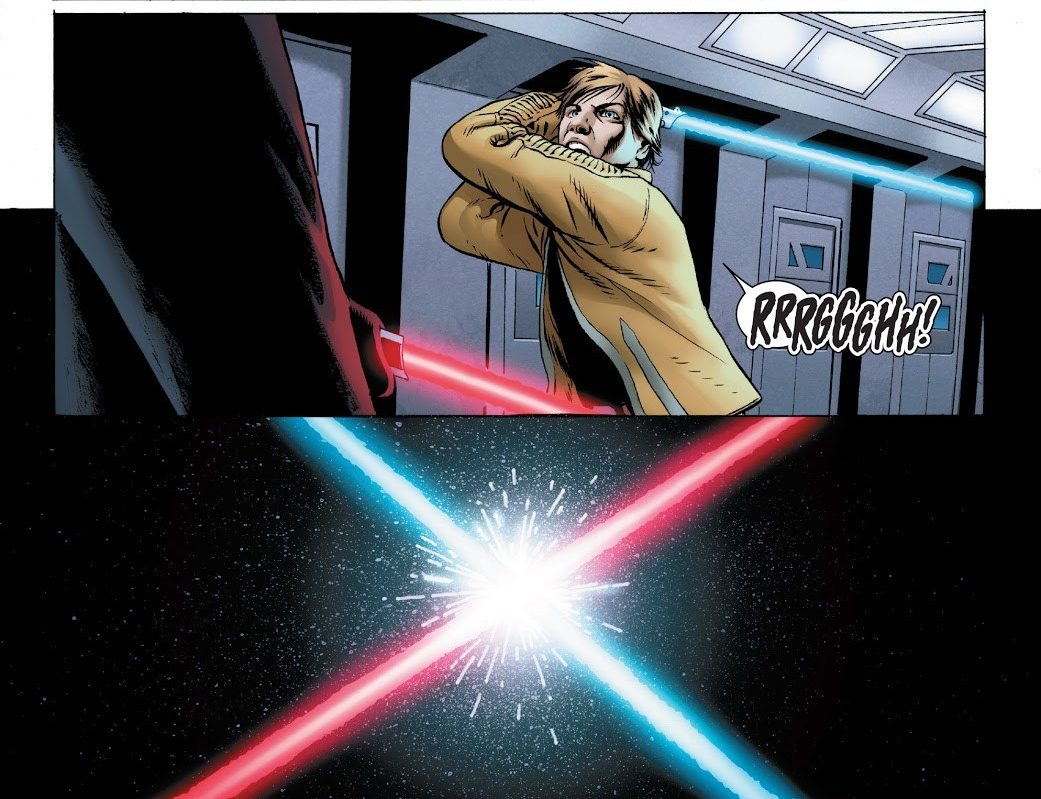 LUKE SKYWALKER IN A LIGHT SABER DUEL AGAINST DARTH VADER

Darth Vader seems hesitant to fight the young Jedi. During the fight, Luke cries angrily that Darth Vader killer his master, Obi-Wan Kenobi. Inexperienced in the Force, Luke Skywalker is disarmed by a Force pull. Darth Vader notes Obi-Wan was not a capable master. As Darth Vader seems to recognize who Luke’s sword used to belong to, an AT-AT piloted by Leia and Han crashes through the ceiling.

OH NO! THE SLAVES OF CYMOON 1 ARE CAUGHT IN THE CROSSFIRES OF DARTH VADER’S EMPIRE’S ASSAULT

The distraction gives Luke Skywalker an opportunity to try and escape with the slaves of Cymoon 1. Luke sees that the slaves are caught in the crossfires between the Empire and the Rebellion and are taking casualties.

Luke Skywalker covered from the Empire fire behind a hideout, blames himself for the casualties, Luke questions his decision to oppose Ben Solo on the mission, he questions his Jedi training and says he is only a farm boy. He looks at speeder bikes.

Luke Skywalker manages to steal a speeder bike from a station. He also manages to get in contact with Ben who updates him on the status of Chewbacca and Threepio. On his way to meet Ben and Leia, he routes to pick up his light saber left in the wreckage. Luke evades capture with the slaves with “no sign of [Darth] Vader” or the Empire forces.

Ben notes that he thinks they will not be meeting Darth Vader any time soon due to the blow of the operation. Luke doubts it but Ben expresses confidence in the Force. However, Darth Vader appears amidst the wreckage. Darth Vader orders the Empire forces to pursue and kill the slaves, and leave Luke Skywalker to him.