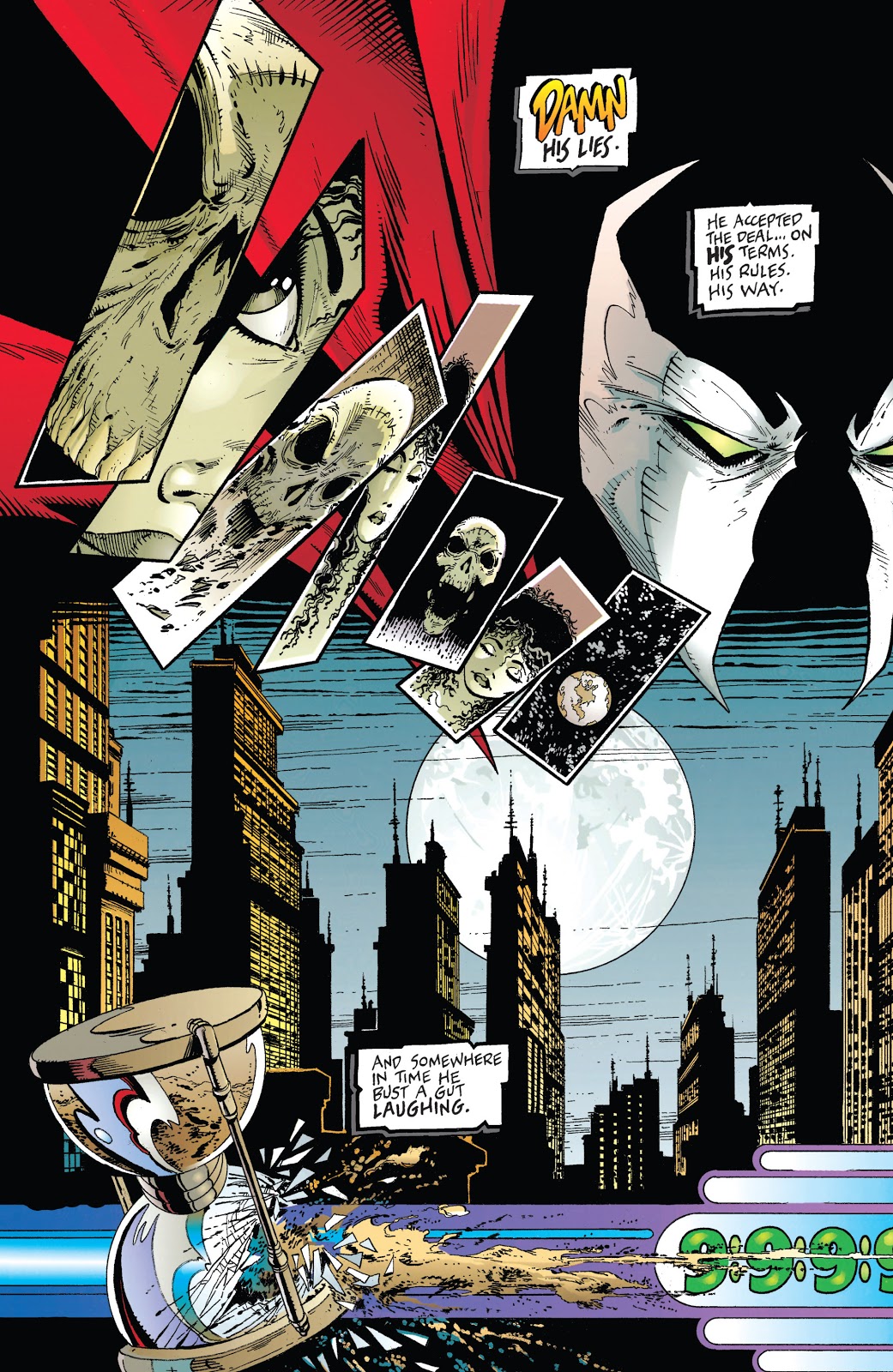 In ‘Spawn’ (1992) #1, Spawn makes a deal with Malebolgia in order to save his wife Wanda in 1992. Five years ago, news report of the death of American hero Lt. Colonel Albert Simmons. He was most well known for having saved the life of the President of the United States. Apparently, his death was involved in covert CIA operations in Botswana. His wife Wanda Blake was shaken at the time and was seen in company of Martian Alexander.

Spawn tells his origin story: He recalls his love for Wanda, his hate for Jason Wynn and Malebolgia. He tells of his heroism and of how he got betrayed by his government, then, he remembers his death. Then Spawn speaks of his remembrance of Wanda, his wife. He remembers his desire to see her, and the deal he made with Malebolgia in order to see her again. Then, Al was reborn as a hellspawn.

HAUNTED BY AMNESIA, SPAWN SEEKS THE MAN WHO FRAMED HIM

Spawn feels powerful and feels his super powers can enable him to do anything. However, he is struggling to regain his memory. He tells of his deal with Malebolgia, exclaiming that the demon gave him super powers but robbed him of his memories.

In an alley, Spawn arrives on the scene where a woman is being assaulted by four men. The woman is fighting against the men. Wanting to make the woman scream, one of the men draws out a knife. Then, he rips off her purple shirt. Seeing the danger, Spawn intervenes. Spawn tells the men to get out or they are all dead. One of the more muscular men recognizes Spawn as one of the recent Youngbloods. The man with the knife, decides to “carve me a super–“1 Spawn responds by throwing the man through a window. Then Spawn asks “now, who’s next?”1

One of the men wearing a pair of sunglasses responds with an expletive. Spawn responds with necroplasm magic that explodes the man’s sunglasses. All the men flee. Spawn is left with the woman and reassures her they are all gone. The woman says not to hurt him and that she would do anything. Then, Spawn is haunted again by images of Wanda that have plagued him since his deal with Malebolgia. Then, Spawn remembers his funeral.

CHECK OUT THE STORY: In ‘The Satan Saga Wars’, Spawn Goes Through Hell To Rescue Wanda.

SPAWN REMOVES HIS SYMBIOTE AND DISCOVERS HE IS DEAD

Since making a deal with Malebolgia, Spawn has been suffering from amnesia. However, Spawn realizes he has a wife. Though, he does not remember her name nor the color of her eyes. Spawn regrets his crime-fighting and blames it on the symbiote he is wearing.

Though his deal with Malebolgia has led to Spawn’s rebirth, the last five years of his life have been taken away. Spawn believes he is alive but wonders why he can’t feel. Then, Spawn decides to take off the symbiote. He removes the mask and his left glove. Then, looking at his hand, he discovers he is dead. He exclaims “What am I?”1

1 thought on “Image Day: Making A Deal With Malebolgia, Spawn Is Reborn!”