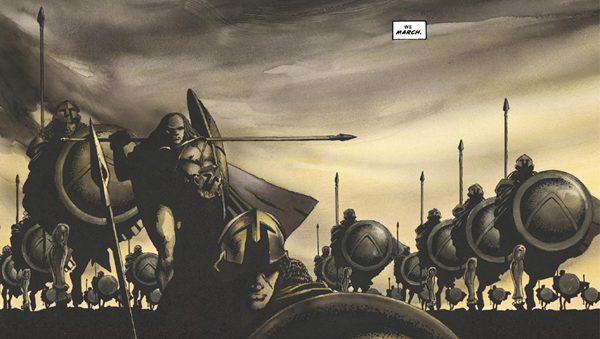 5. KING LEONIDAS AND THE SPARTANS’ FEAT IS HISTORICAL

Under Xerxes I, the Persian army moved south through Greece on the eastern coast, accompanied by the Persian navy moving parallel to the shore. To reach its destination at Attica, the region controlled by the city-state of Athens, the Persians needed to go through the coastal pass of Thermopylae (or the “Hot Gates,” so known because of nearby sulfur springs). In the late summer of 480 B.C., Leonidas led an army of 6,000 to 7,000 Greeks from many city-states, including 300 Spartans, in an attempt to prevent the Persians from passing through Thermopylae.

Leonidas established his army at Thermopylae, expecting that the narrow pass would funnel the Persian army toward his own force. For two days, the Greeks withstood the determined attacks of their far more numerous enemy. Leonidas’ plan worked well at first, but he did not know that there was a route over the mountains to the west of Thermopylae that would allow the enemy to bypass his fortified position along the coast.

A local Greek told Xerxes about this other route and led the Persian army across it, enabling them to surround the Greeks. Much of the Greek force retreated rather than face the Persian army. An army of Spartans, Thespians and Thebans remained to fight the Persians. Leonidas and the 300 Spartans with him were all killed, along with most of their remaining allies. The Persians found and beheaded Leonidas’ corpse–an act that was considered to be a grave insult.

4. IT OCCURS DURING THE GREEK HEROIC AGE

The Greek Heroic Age is an important part in Hellenism. Though there is disagreement on its starting and its ending years, Greek poet Hesiod agreed it started with the Bronze Age and ended with the Iron Age.

It is agreed that they lived during the times of the war between Troy and Thebes, Hercules’ Twelve Labors and the voyage of Odysseus.

Ancient Greek myths, the stories about gods and heroes, are set sometime “long, long ago”. The ancient poet Hesiod, in his Works and Days, came up with a system of alternating generations of mortals – in English, it is customary to refer to “Ages” instead. The sequence starts with the Golden Age, followed by the Silver Age, the Bronze Age, the Age of Heroes, and finally the Iron Age. The Iron Age was the time when Hesiod himself lived, so contemporary ancient Greece (in his case, around 700 BC).

In ‘300’ (1998) #1, King Leonidas gathers 300 Spartans in order to fight the Persian invasion. Because of the Persian numerical advantage, Leonidas uses a military strategy called “defeat in detail.”

Courageously, Leonidas marches the Spartan army to the narrow cliffs of of Thermopylae (“The Hot Gates”). There, the terrain will allow them to make a stand against the Persian army.

In contrast, King Xerxes and the Persian army had horses and carriages. The only advantage the Spartans had was military strategy. The reason why the 300 Spartans performed the greatest human feat was because they held off a more powerful army with an overwhelming numerical advantage.

1. GOD VS MAN: KING LEONIDAS PROVED “EVEN A GOD CAN BLEED”