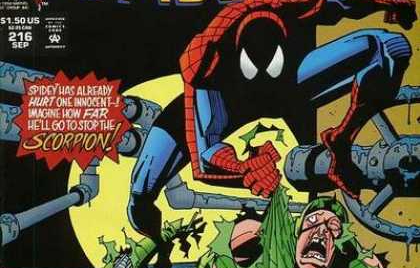 5 MYTHS ABOUT BEN REILLY IN THE ‘CLONE SAGA’

In Amazing Spider-Man (1975) #149, Spider-Man learns about the existence of his clone. During the issue, the Jackal reveals his identity as Peter Parker’s biology professor. Namely, Miles Warren was secretly in love with Gwen Stacy. When Gwen died, he blamed Spider-Man and plotted revenge. After an unethical experiment, Warren realized Serba wanted to clone a human Gwen

In madness, he killed Serba and became the Jackal. Later, he clones Gwen as well as Peter Parker. In the issue, Spider-Man and his clone fight for the last one standing. However, Warren seemingly kills the Spider-Man clone when he fails to stop his bomb. Fortunately, Spider-Man escapes. In the end, Spider-Man buries the body in an industrial chimney. In reality, Ben Reilly was alive and survived thanks to a chemical the Jackal previously injected in him.

4. BEN REILLY IS A CRIMINAL

Later, after Ben Reilly assumes a costumed identity, he becomes the Jackal. Previously, Ben Reilly found illegal employment. Thanks to a scientist he met a scientist named Seward Trainer, he obtained fake paperwork. However, his illegal work was inconsistent.

In Web of Spider-Man (1994) #117, Ben Reilly returned to New York. After an initial mistrust, both Peter Parker and his clone got along. However, Peter was stunned when Seward Trainer revealed Ben Reilly was the true Peter Parker and Peter Parker was the clone. Fortunately, each hero agreed to keep their civilian identities. When Mary Jane became pregnant, Peter moved with her out of New York.

For a while, Ben Reilly would have adventures and lead a normal life. Finally, Trainer was revealed to be an agent of Norman Osborn who survived apparent death after The Night Gwen Stacy Died. In fact, he was the mastermind behind the clone saga. In the end, Ben disintegrated after Green Goblin’s glider pierced him, proving he was the clone.

When Peter and Mary Jane moved out of New York, Ben initially took on the costume of the Scarlet Spider. Later, feeling guilty over Uncle Ben’s death, he became Spider-Man.

Later, Spider-Man wold have adventures with the Human Torch and the X-Men. In addition, he would fight Mysterio and help defeat Green Goblin in his last battle before his death. However, he would return.

1. SPIDER-MAN IS STRONGER THAN BEN REILLY

In many respects, Ben Reilley proved a capable Spider-Man.

During DC Versus Marvel, he proved capable of defeating the stronger Superboy.