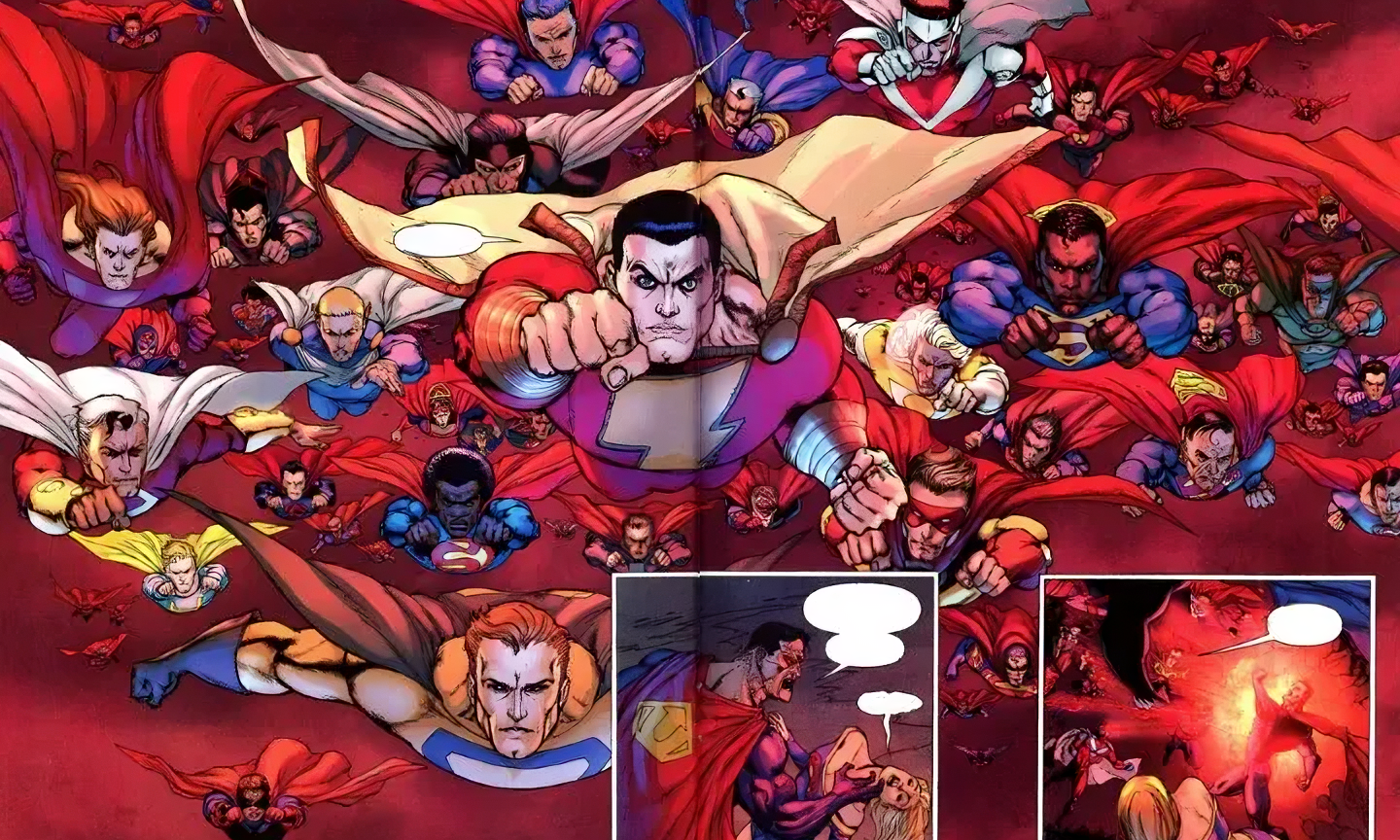 DURING CRISES, THE DC MULTIVERSE ACTIVATES ITS DEFENSE SYSTEM

In Justice League Incarnate #4, the true purpose of Superman is revealed. During crisis events, the DC multiverse is threatened. In order to protect its survival, the DC multiverse activates its immune system: superheroes. Importantly, Frank Martin at ScreenRant argues Superman represents the archetype of the ultimate hero.

In fact, Final Crisis reveals Superman and his analogues are the guardians of the Bleed. In Superman, The Greatest Story, I argue that the Bleed is a living 4D space that connects the DC multiverse’s shared history. During the final battle, the Supermen of the Multiverse arrive on New Earth in order to battle Mandrakk, the Dark Monitor. Let’s look at Superman and analogues in DC and Image that protect the Bleed and its analogues.

A FAN OF THIS COMIC? CLICK ON FINAL CRISIS BELOW TO BUY the comic.

To begin, Darkseid threatened the DC multiverse with the Anti-Life Equation. With Nil, Monitrix Zillo Valla chose Superman and the champions of the DC multiverse. Importantly, their mission was to stop Mandrakk. In order to succeed, Zillo Valla promised the Man of Steel the Ultramenstruum.

Dangerously, Mandrakk bottled this Bleed droplet. In fact, the Bleed was the only substance capable to save a critical Lois Lane. Heroically, Superman merged with Ultraman and became Thought Robot. Successfully, the Doomsday Weapon defeated Mandrakk in Nil and retrieved the Bleed.

To protect the Bleed, the Authority kidnapped a near-critical Captain Atom aboard the Carrier. Moreover, they intended to kill him to prevent the Captain from blowing up the universe. When Mister Majestic attempted to stop the Authority, he was frozen in time by the Doctor. In the end, Void solved the problem by allowing the destruction of Wildstorm. In addition, she teleported Captain Atom back into his universe.

At Image Comics, Alan Moore revamped Supreme as a Superman analogue in 1999. In The Story Of The Year, Supreme returns to Earth after exile in space. Strangely, he notices reality flickering between the 1940s and the 1990s. There, he meets Supreme duplicates such as Original Supreme, Sister Supreme and Superion.

Soon, they travel to the Supremacy. Here, he learns it is a limbo realm where every possible version of Supreme lives. Similarly to the Bleed, it acts to create revisions in Supreme continuity. Moreover, it constantly erases or replaces friends and foes. Similarly, the Supreme duplicates act as guardians of the Supremacy. Indeed, they help Supreme and the Image Universe in moments of need.

2 thoughts on “Fan Theory: At DC Comics and Image Comics, The Superman Analogues Are Guardians Of The Bleed”