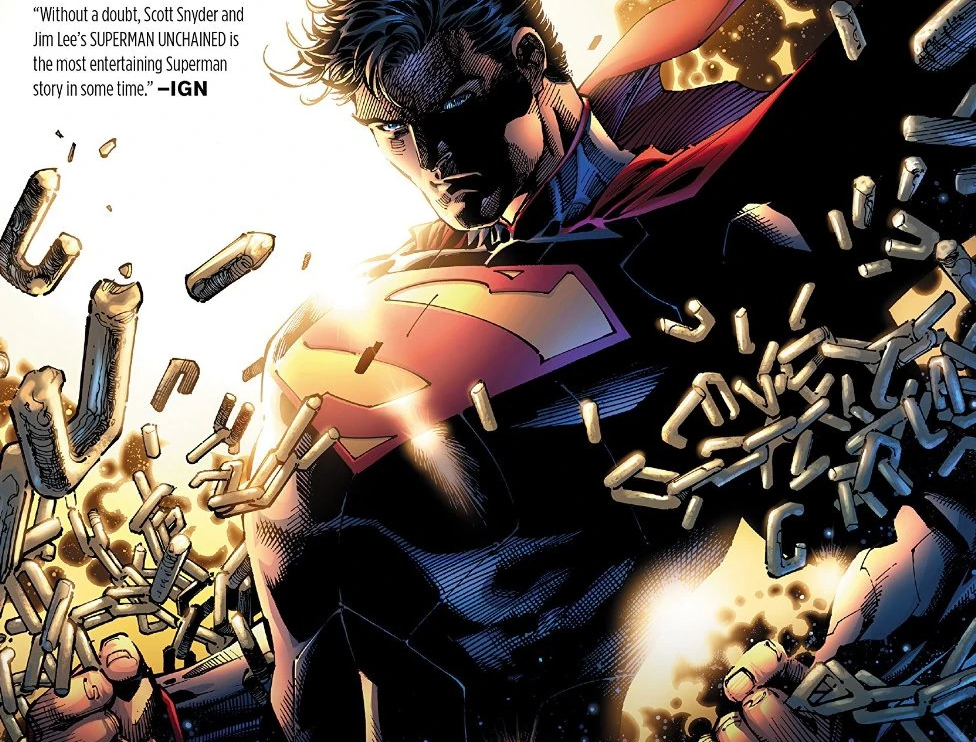 One of the best Superman stories of the New 52. Gift this comic to your family and friends on the occasions of Comic-Cons and festivals. Available on Amazon.

Click on the Amazon product image below to buy the Hardcover comic.

Decades before the Last Son of Krypton became Earth’s champion, another being of incredible power fell from the sky. His role in humanity’s deadliest conflict became America’s darkest secret.

Now the secret is out. And this super soldier has been unchained once more.

The Man of Steel. His arch-enemy, Lex Luthor. His close confidant, Lois Lane. Her ruthless father, General Sam Lane. Techno-terrorists with a shocking link to the past. All of them will vie for control of this hidden engine of destruction.

And when the smoke clears, only the real superman will survive…

Critically, Superman Unchained (2014) is the best Superman story of the New 52. Importantly, a secret about the U.S. Army and alien contact arises that threatens Earth. And a mysterious ally rises who questions Superman’s humanity.

Together, writer Scott Snyder and superstar artists Jim Lee and Dustin Nguyen collaborate on the story. Though grounded and deconstructionist, the writing shines on the menace of alien invasions. Nevertheless, the art in the book is characteristic of the New 52: big, bold, fun. Moreover, Superman vs Wraith!

Indeed, share this Deluxe Edition to fans of Superman, at comic clubs and Comic-Cons. Definitely, it is worth its price and will leave you wanting for more Superman! And Lois Lane!

This comic showcases Superman Unchained: Deluxe Edition (The New 52). One good feature of this comic is that it is available in Hardcover format. It is published by DC Comics.

This comic has another feature. One good feature of this comic is that it is available in Kindle and Comixology formats. It is published by DC Comics.

To begin, Superman Unchained questions the place of Superman in the world. Importantly, a new villain appears who questions Clark’s humanity. Dangerously, the U.S. Army and a mysterious alien army threaten Earth. And Superman must choose between Earth and his Kryptonian heritage.

The comic is excellent for your collection. You will definitely love Jim Lee’s realistic pencils, the characters’ muscular physiques and the color palette. This is the comic to own in order to build your New 52 collection.

This product has 268 global ratings with a customer review rating of 4.8 out of 5.

The customer review said: “An exiting action packed adventure. the art is excellent, from one of today’s top artist in the media. the story is OK. Well written. Very enjoyable.

My favorite parts where Superman’s inner dialogues, They make him brave and really smart. Shows it takes more than super-powers to be super-hero. Also Batman and Superman NOT being rivals and actually trusting each other. And Clark acting like a reporter and not just being a cover up for the world’s greatest hero.

What I dislike was having the army considering Superman a threat…Again. Its been so overused lately (Superman:Birthright, Superman: Earth One, Superman: Secret Origin, the Man of Steel movie, etc).”

There are two negative reviews. One negative review pointed Superman not acting in character: “Superman was acting like batman did not really felt the story it was meh.”

I recommend this comic as the best Superman comic of the New 52.