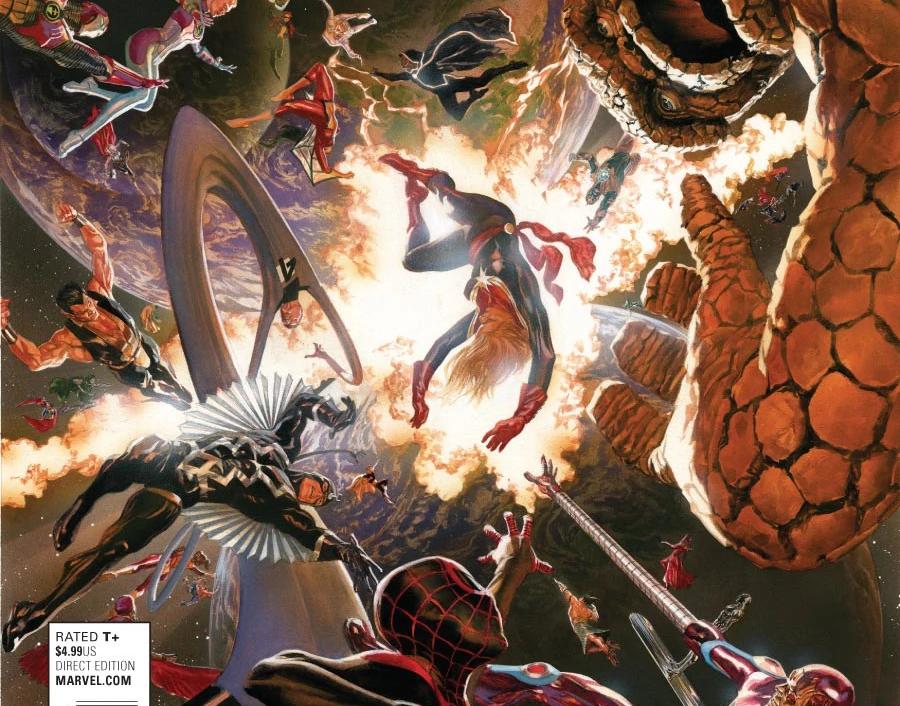 This is My Comics Reading List for Doctor Doom storylines. For anyone collecting, we are recommending the following comics as additions to their collections. You will love them!

The Marvel Universe is no more! The interdimensional Incursions have eliminated each and every dimension one by one – and now, despite the best eff orts of the scientists, sages and superhumans of both dimensions, the Marvel Universe and Ultimate Universe have collided with one another…and been destroyed! Now, all that exists in the vast empty cosmos is a single titanic patchwork planet, made of the fragmented remains of hundreds of devastated dimensions: Battleworld! And the survivors of this multiversal catastrophe must learn to survive in this strange new realm! What strange creatures inhabit this world? Which familiar faces will make their return? And what happens when the various realms go to war? The Marvel Universe is dead…and the victors of the Secret Wars will determine what comes next!

Every year on Midsummer’s Eve, Victor von Doom clashes with the forces of evil in a vain attempt to free his mother’s soul from Hell. Only when Doctor Stephen Strange — Master of the Mystic Arts and Earth’s Sorcerer Supreme — is convinced to join the fight, does the outcome have any hope of changing. But first these unlikely allies must journey to Mephisto’s infernal realm…where they find that the cost of one soul may be more than they are willing to pay!

Re-presenting perhaps the greatest Doctor Doom story ever told, along with a host of extras, including a prologue in which Doom considers becoming Doctor Strange’s apprentice — and rare short stories by legendary artist Mike Mignola, starring Doctors Strange and Doom’s ever-unpredictable ally, the Sub-Mariner.

Wakanda has been conquered, its Vibranium reserves plundered. Storm faces execution in the next 48 hours. And Dr. Doom stands triumphant. It will take the combined forces of the X-Men, the Fantastic Four and the two Black Panthers to stand against him. A war has begun that will pit the world’s most relentless super villain against a collection of the world’s most powerful super heroes–one that will span the globe, offering twists and turns and surprise players (hello Deadpool!) that neither side will see coming.

Five-time Eisner-nominated Best Writer Ed Brubaker turns his shadowy vision to Marvel’s greatest villain, Victor Von Doom. With the phenomenal art team of Pablo Raimondi and Mark Farmer, you will witness Doom’s life from his earliest moments to the day he took the throne of Latveria. A dark and revealing examination of how an innocent boy grows up to be a tyrant – a new twist on an old legend – Books of Doom is a sweeping epic of tragedy, madness and destiny! Collects Books of Doom #1-6.

Iron Man and Doctor Doom at first find themselves in the time of Camelot, drawn into the rivalry between King Arthur and Morgan Le Fay, but then they are sent to the distant future to save Earth from death satellites with Merlin and a young Arthur.

The year is 2099. Victor von Doom, having mysteriously survived from the Heroic Age of the early 21st century, has risen anew in this technologically advanced future. Having retaken his beloved Latveria from those who ruled it in his absence, Doom has turned his gaze to America, once the home of his greatest foes. He sees unrest. He sees disharmony. He knows that the struggling nation needs an iron fist to bring it back under control. And he knows just the man for the job. All hail … President Doom?! Superstar writer Warren Ellis’ maniacal overhaul of Dr. Doom’s futuristic series is collected in one volume, featuring technological horror, dystopian despots and more sheer wrongness than you can shake a gauntlet at!