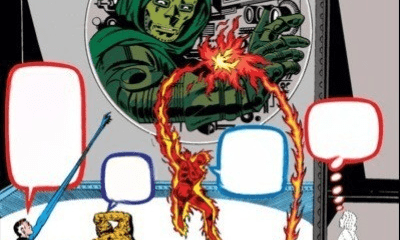 *To commemorate the 60 year anniversary of Fantastic Four #5

In our new hotness, we have The Best Sellers List. Here, we cover the greatest battles of a particular character in a comic or series, and how it made it a best-seller. In our new hotness for August, is Invisible Girl in Fantastic Four #5.

WHY INVISIBLE WOMAN IS ON THE BEST SELLERS LIST

When both superstars collaborate on this work, you expect a classic. In fact, the creative team took the world by surprise!

When Stan Lee created the Fantastic Four, it was promoted as “The World’s Greatest Comic Magazine!” Though DC Comics was ruling comicdom during the Silver Age, the Fantastic Four sought to change societal attitudes with regards to race, and even, gender roles.

With a team of four super-powered heroes, the FF sported a female figure that over time played a prominent role in many of their adventures. And when Doctor Doom makes his terrifying first appearance for the first time, the female is initially singled out!

Now, the heroes must stop the villain’s raving plans before it is too late. Witness why Invisible Woman may have been the Most Important Hero in the battle.

THE BATTLE THAT SOLD THE STORY ARC

Importantly, the battle in Part #5 sold the story arc. When the Fantastic Four (minus Invisible Girl) return from their mission, they must rescue Sue. Comically, Mister Fantastic actually tricks Doctor Doom with a treasure chest containing a chain, and not treasure.

With the trickery, the hostilities are engaged. After a brief scuffle, they discover the villain was a Doombot and that the mastermind and Invisible Girl are in another room. However, it is too late. Wickedly, Doctor Doom activates the switch that empties the room of oxygen.

Heroically, a captive Invisible Girl springs into action. Quickly, she turns invisible and short-circuits Doom’s machine causing it to explode. Even more, she heads to the room where the heroes are about to breathe their last, and unlocks the door. Soon, air returns and the heroes are saved.

Definitely, this comic changed the damsel-in-distress trope on its head by showing that women could be heroines. And we recommend this comic for its humor, classic feel and intrigue.

Indeed, buy this comic to witness Mister Fantastic stretch over a mile at sea to offer passage between two boats for pirates. In the end, the comic answered why it was touted as “The World’s Greatest Comic Magazine” and entertained fans for generations.

Number 5. Fantastic Four #4: Features the first appearance of Namor the Sub-Mariner in the Silver Age.

Number 6. Fantastic Four #2: Features the first appearance of the Skrulls in Marvel continuity.