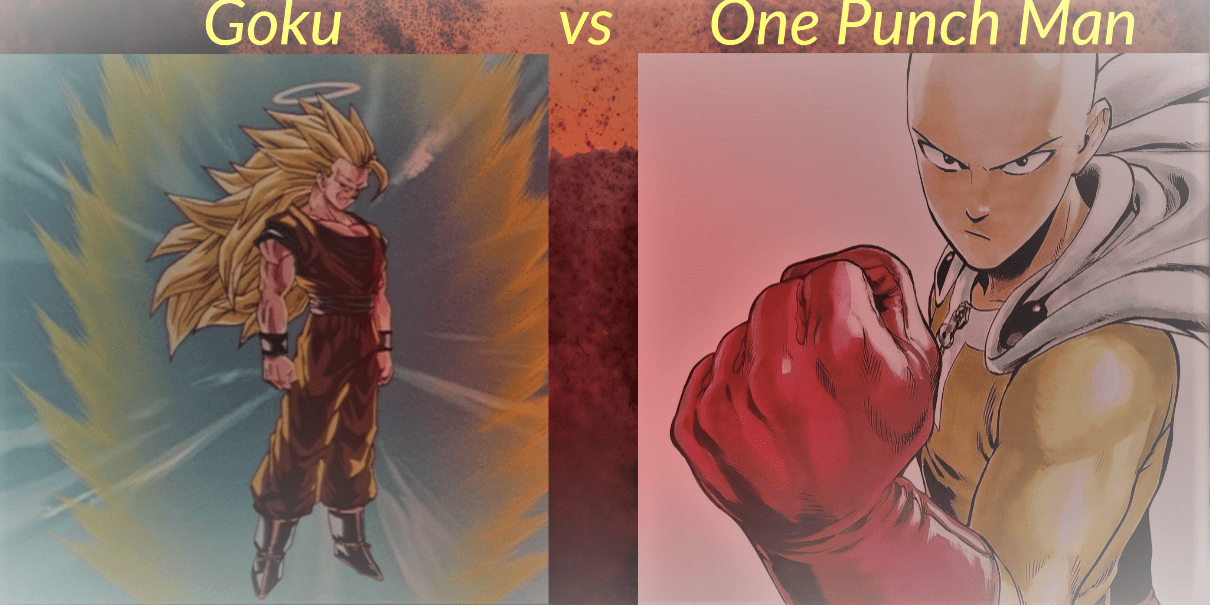 THE TWO STRONGEST WARRIORS IN ANIME

For our very first Anime/Manga article, we compare two of the best warriors in manga and anime. For dedicated fans, who have been following the media, manga and anime produce some of the most gravity-defying and exhilarating fights in all fandom.

In today’s article, we compare two fighters that are the cream of the crop in terms of fighting spirit, determination, strength and yes… fighting!

Though both universes have never met, what would happen in a battle between the strongest Saiyan, Goku and the strongest hero in anime, One-Punch Man?

Really, both are A-list and B-class heroes in their respective universes. Namely, the legendary Goku recently appeared in the mega-hit Dragon Ball Super animated film Dragon Ball Super: Broly. For his part, the debonnaire Saitama continues his journey towards becoming an A-Class hero.

Though both heroes have shown devastating attacks, let’s compare their strength in terms of fighting monsters, not just villains. Hence, we compare Super Saiyan 3 (SSJ3) Goku with the Dragon Fist vs One-Punch Man with the Serious Fist.

Generally, the concept of power levels understood scientifically or physically is not useful in anime and manga. In fact, this is due to the concept of ki.

In anime and manga, characters’ strengths are not dependent on how much physical strength they can exert, or how much they can lift. Instead, they depend on their ability to use their natural life force for devastating attacks, super speed or abilities such as flying.

In many respects, these are an application of martial arts and Chinese philosophies to the arts of fighting and war. For these reasons, we compare these warriors in terms of formidability.

For this reason, it is almost interchangeable with the Fighting Skills Level. For example, this explains why Batman is able to defeat Killer Croc or Bane who are in fact stronger or more powerful.

Before we rank our two heroes, let’s list some rules.

First, we will compare them in Strength Class, Weaknesses, Quality Opponents and Limitations. Then, let’s rank Super Saiyan 3 Goku and One-Punch Man in Formidability. To note, all scores are rated out of a 100.

Generally, SSJ3 Goku is among the strongest transformations of the hero. On many occasions, the transformation is used as a last resort. This is because in Dragon Ball Z and after, Goku has not fully mastered the form.

Though it is able to generate a lot of destructive power even creating shockwaves over the entire Earth when transforming during the Majin Buu saga. At the same time, it comes at a great expenditure of life force, such that Goku can only maintain it for less than an hour.

In Dragon Ball Z: Wrath of the Dragon, Goku uses the Dragon Fist for the first time to destroy Hirudegarn. Properly speaking, the attack is Planetary Level since Hirudegarn was strong enough to devastate the planet.

On the other hand, One-Punch Man rates as strong as SSJ3 Goku. In most of his fights, Saitama is nonchalant and appears bored. In fact, his strength level is so great that in Season 1 he defeats his opponents without being harmed.

However, in the case of Boros, One-Punch Man met an interesting match. Initially, the villain was able to regenerate from Saitama’s Simple Punches. But when Boros threatened to destroy the planet with his Collapsing Star Roaring Canon, Saitama became serious.

For the most part, Goku’s main weakness has been his compassion. In his battles, he has often gotten the upper-hand on his opponents, only to lose because he would not finish them. Nonetheless, Goku remains the strongest of the Saiyans and a fighting genius.

Indeed, he has mastered multiple techniques over the years such as Kaio Ken, Kamehameha Wave, Instant Transmission and yes, the Dragon Fist.

It appears the technique is possible only under Super Saiyan 3. Notably, it shows one of Goku’s most vicious attacks as he is rarely shown to fight to the death. Perhaps, Goku would perform better in his fights with such a mindset.

Generally, One-Punch Man is THE perfect warrior. Though he does have a weakness which is his lack of interest in fights due to his overwhelming strength. In a fight with the Saiyan, it could cause some problems though Saitama seems to be a true hero.

As a hero who has mastered martial arts, One-Punch Man has developed multiple techniques such as his Simple Punch, his Serious Punch or even the Roaring Cannon.

Overall, both fighters seem about even in terms of Weaknesses though they overcome their Hubris with the Dragon Fist and the Serious Punch.

BECOME A MEMBER TO VOTE IN THE MIGHTIEST PUNCH!

A FAN OF ANIME? CLICK ON DRAGON BALL Z: WRATH OF THE DRAGON AND ONE-PUNCH MAN STANDARD EDITION (DVD) BELOW TO BUY THE DVDS ON AMAZON.

Perhaps, the most confusing area to consider. Goku’s most dangerous foes tend to be creations of mad scientists such as Cell or Majin Buu. At the same time, aliens such as Freeza and even Saiyans have fought him to the death.

Though their physical strength is often around Building-City, their Power Level or ki tends to be around Planetary. In terms of Power Level, Goku’s strongest opponents are Planetary-Level.

In comparison, One-Punch Man seems to have adopted a more Western or perhaps empirical approach. During his battle with Mirugori, One-Punch Man survives Giant Man’s blows and leaps out of a 100 meter crater to deliver a devastating blow.

Initially, with 9.48*109 J of energy, this would put his Durability at Building Level. Later, in his fight against Boros, the villain kicks him into the moon.

At 384.4 million meters of distance between Earth and the moon, Saitama withstood at least 3.64*1016 J of energy. Effectively, his durability is from Multi-Continent to Moon Level. Overall, SSJ3 Goku has better Durability with similar Quality Opponents at the Champion Level.

At the end of the day, it is the Superman vs Goku question: Unlimited Super Strength vs Unlimited Ki. Perhaps, their only Limitation is Willpower.

And that’s our ranking! Don’t forget to leave comments if you liked the Anime/Manga.

Visiting Asia or Latin America on vacation at a resort to entertain yourself or a loved one? Click on Michael Kors Gilly Large Jet Set Drawstring Top Zip Tote below to buy the luxury tote on Amazon.