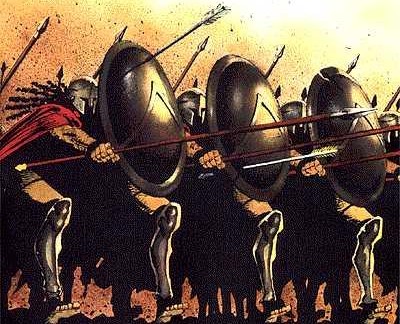 In my investigation of the White City Butcher, I have stumbled upon a legend of myth. I was looking for clues on the demon who possessed James Barrow, and I found in the computer files, a file about the 300.

In ‘300’ (1998), King Leonidas and the 300 march towards Thermopylae to face a being of legend, the god Xerxes, the Emperor of Persia and his innumerable army.

According to legend, King Leonidas and his 300 bodyguards, were strong and proud men, who lived by Spartan law. When the Eupors would not consent to King Leonidas’ decision to go to war with the Emperor of Persia, King Leonidas embarked on a march with his 300 unbeknownst to the Eupors.

He faced Xerxes and his army at Thermopylae.

Check Out The Action: Dark Horse Day: The Death Star.

On arriving at the battlefield, a place called Thermopylae (the “Hot Gates”), Leonidas and his men picked the place where they will set up their defense. The Hot Gates was a pass between the mountains. If Leonidas could funnel the Persians into this area, their numbers would count for nothing. Thus, a wall was built which forced any attackers into the Hot Gates. When Xerxes attacked with his lightly armed Persians, they were unable to force the Spartans back despite their massive numerical superiority.

The first day of fighting ends well for the Spartans, and so Xerxes send in his elite troops, the Immortals, so called because their unit was always kept at one thousand men strong. They were Xerxes’s personal body guard and highly trained. After a bloody battle, the Spartans are once again victorious. The second day passed in much the same way. It seems as if the Spartans will succeed.

Unfortunately for the brave Spartan King, someone would betray him. The Immortals closed in on the Spartans, and the warriors were slaughtered.

However, Leonidas is betrayed. A traitor showed Xerxes a secret pass through the mountains used by goat herders that allows the few remaining Immortals to get behind the Spartans. The few Greek guards are slaughtered, and by morning, Leonidas is surrounded.

Earlier on, he had sent a messenger back to Sparta to tell them the tale of the defenders and to psyche them up for war. He then turned to his men and said, “Make breakfast and eat hearty, for tonight we dine in hell!”

This prophecy proved accurate when Xerxes gave Leonidas a final chance to surrender. He dropped to his knees, and removes his helmet and shield. At first it appears he is giving in. Suddenly, one of his men kills the messenger standing between him and the emperor. The Persian troops began to shoot the Spartans down with arrows, but Leonidas managed to throw his spear. His spear slices open Xerxes’s cheek, wounding the supposedly divine Emperor and proving that even a god can bleed.

The story of King Leonidas and the 300 ends with King Leonidas injuring Xerxes’ left cheek and dying pierced by spears and arrows. The 300 die on the battlefield.

The story is a powerful myth. It made me consider possible connections between James Barrow and demons of a Greek origin.

As I continue my investigation, I remain haunted by these heroes of myth and wonder if what happened to them, will also happen to me. I am Ghost after all!