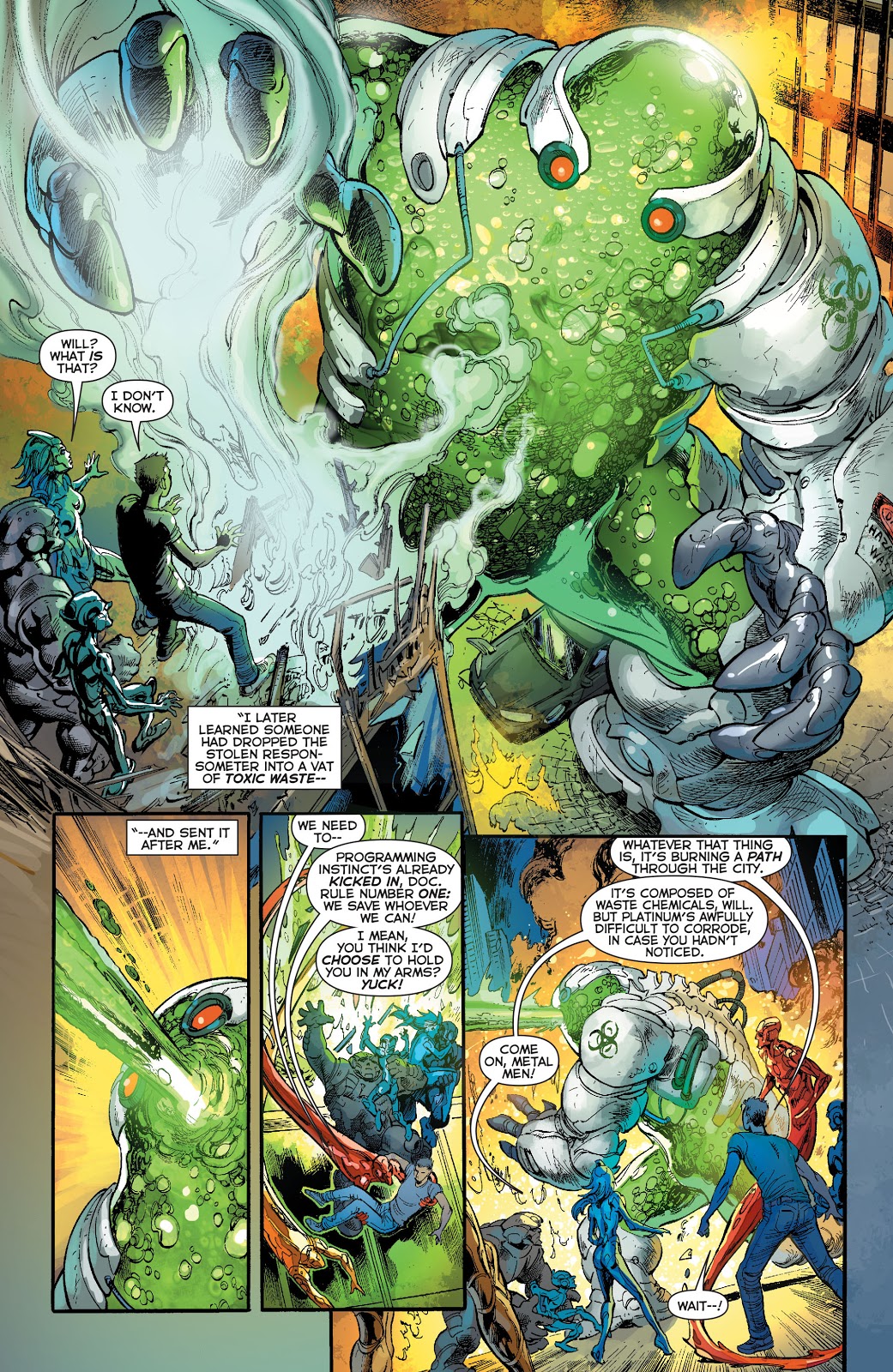 THE METAL MEN ARE RUNAWAYS

In ‘Justice League’ (2014) #28, the Metal Men engage on their first mission, though they are runaways. Dr. Will Magnus returns to his apartment, in order to come up with a way to “fix” what he perceived as the Metal Men’s malfunction.1 An example of speciesism, where a human creature fears another form of life and seeks to control it.

As Dr. Magnus throws his sixth design, he notices that the trash can is moving. He realizes it is Tin. Dr. Magnus asks Tin about the other Metal Men and he finds out that Tin and the Metal Men are hiding as runaways in his apartment. As Dr. Magnus explains to the Metal Men that he is trying to “fix” them, mayhem ensues.1

Dr. Magnus narrating the events of the Metal Men’s first mission to Cyborg, states that the government created a monstrous android, by dropping his “prototype”, “a stolen responsometer into a vat of toxic waste.”1

The monster destroys Dr. Magnus’ apartment. As Dr. Magnus attempts to give the Metal Men orders on how to proceed, Mercury protects him and gets him out of harm’s way. The Metal Men embark on their first mission, taking Platinum’s lead without following Dr. Magnus’ orders.

CHECK OUT THE STORY: IN THE BATTLE FOR JENNY QUANTUM, THE COMMANDER BEATS DOWN AND RAPES APOLLO.

THE METAL MEN REACT … AND DIE

The Metal Men enter Chemo. The Metal Men fused with the toxins in Chemo and rendered them inert. There is a reaction, an explosion and then… death. Sometimes, it is the victims of speciesism that show the most selflessness as other forms of life teach humans on how to protect their species. Dr. Magnus explains that the Metal Men were a failure because of their desire to be humans, they wanted to watch television, find love.

NEXT: THE METAL MEN’S MISSION IN ‘FOREVER EVIL.’ NOVEMBER 2ND.