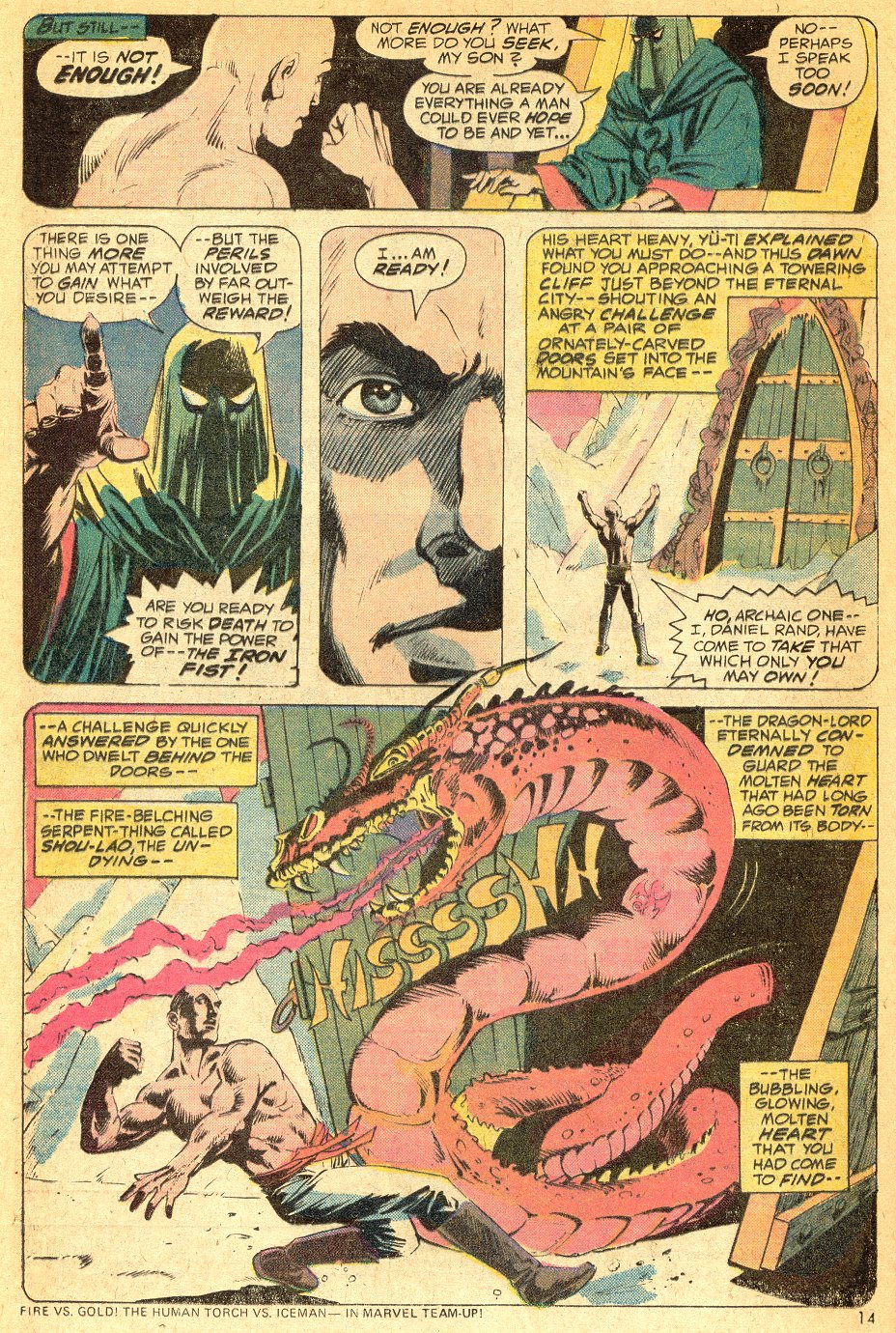 IN THE CITY OF K’UN LUN, BEGINS THE PATH OF THE WARRIOR

In ‘Marvel Premiere’ (1974) #16, the path of the warrior begins in the city of K’un Lun, it is a dream in a way. 10 years ago, Daniel (Danny) Rand arrives at the gates of the fantasy city of K’un Lun escorted by a protector. He meets the venerable Yu-Ti. Seating on a throne, he proposes to grant Daniel’s heart desire.

Under the tutelage of Lei Kung, The Thunderer, Daniel trains in the martial arts and has to face the King of Vipers. He trains and is tested until he is ready for him to face his coming-of-age test.

At the age of sixteen, faces the King of Vipers one last time. He speaks, his eyes narrow, his hands move with blinding speed then, the Crown of Fu-Hsi is his. The Crown of the King. But his victory seems hollow.

CHECK OUT THE STORY: IN AN ALIEN INVASION, THANOS AND HIS ARMY BATTLE EARTH IN MARVEL’S ‘INFINITY’

Daniel meets with the venerable Yu-Ti. Having sharpened his fists with sand, gravel and rock, he finds it is not enough. The venerable Yu-Ti senses his dedication and orders the challenge to the death with the fantastical dragon, Shou-Lao The Undying in order to obtain the power of … the Iron Fist.

The dream continues. According to the legend, Shou-Lao is a dragon-lord that was eternally condemned to guard the molten heart that had been torn from his body. Daniel Rand had come to claim the molten heart in order to obtain the power of … the Iron Fist!

The final scene is set. The dream takes shape as the warrior fights the dragon of legend. Daniel delivers “a devastating rock-smash blow” to the dragon’s head.1 But the monster recovers and comes back on the offensive. Then, he tries a desperate attack: Daniel utters a prayer then lunges towards the dragon tattoo on the monster’s breast. He hopes this way to block “the mystic emanations” from the molten heart that sustain the dragon with his own body.1

The heat from the scar seared through his flesh, but Daniel withstood the “blistering” to the point of unconsciousness until the scar appeared on Daniel’s chest.1 Shou-Lao fell to the floor as Daniel triumphed. Danield headed for the cavern and found the molten heart. Again and again and again, he “plunged [his] open hands agonizingly into the glowing molten essence.”1 Until his hands shone. He became … the Iron Fist.

Iron Fist passes his last challenge by defeating a robot. Yu-Ti gives him the chance to gain eternal life. He can either eat from the Tree of Immortality and stay in K’un Lun or return to civilization. Burning with revenge in his heart, Iron Fist refuses Yu-Ti’s invitation and returns to civilization to avenge on his parents’ killer, Harold Meachum.

The dream ends. That is, the fantasy that is K’un Lun ends with Iron Fist returning to civilization. The flashbacks end and Iron Fist is in battle with the supervillain named Scythe. He has revealed to Iron Fist that there is a 10 million dollar bounty on Iron Fist. As Iron Fist defeats his foe with his signature iron fist, he finds out the bounty came from the owner of the Meachum Building.

In ‘Power Man and Iron Fist’ #10, a turf war erupts in Harlem after Civil War II.

3 thoughts on “Marvel Day: In The Dream Of K’un Lun, Danny Rand Defeats The Dragon Shou-Lao The Undying And Becomes The Iron Fist”