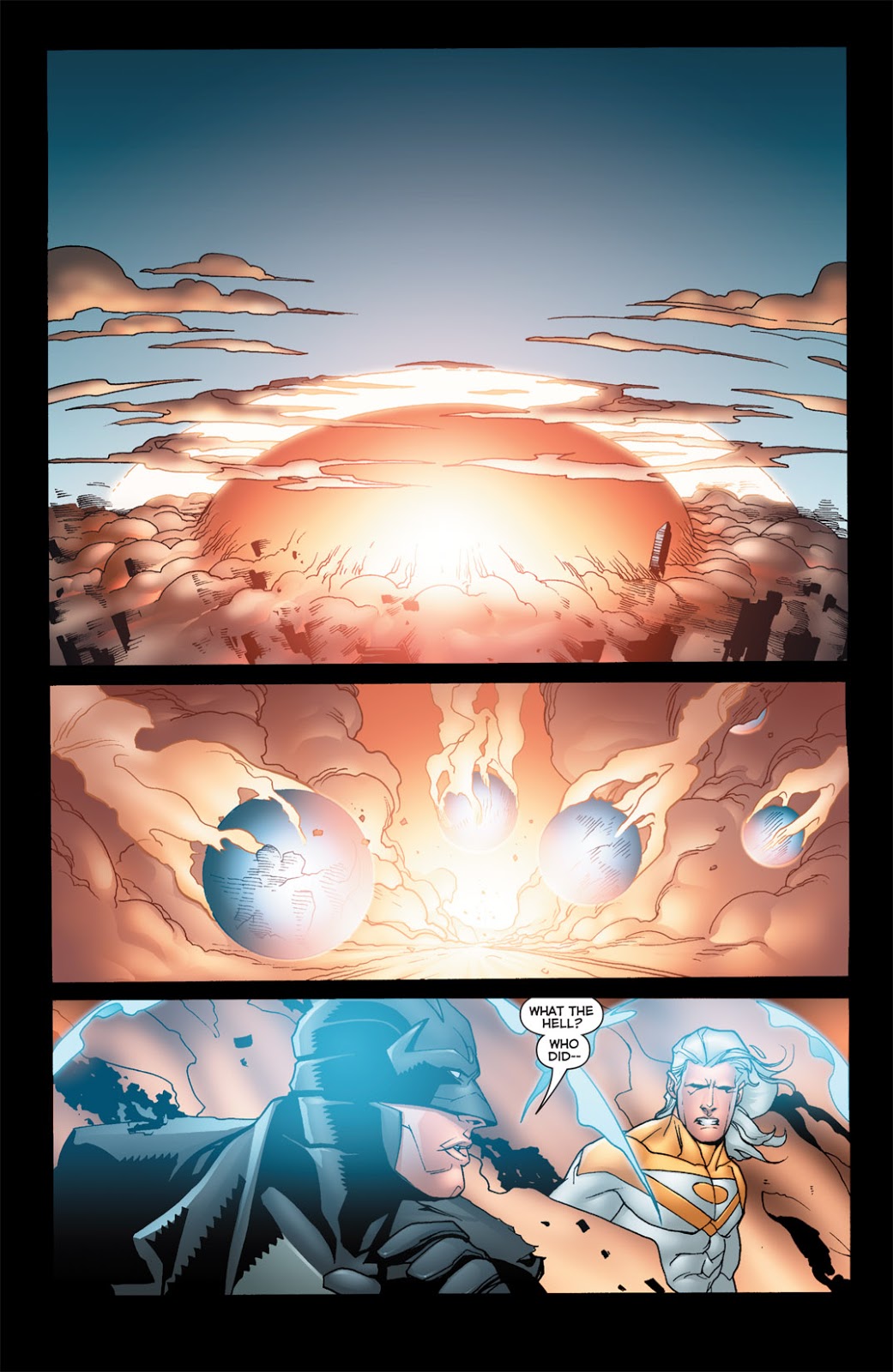 IN THE BATTLE AGAINST PAUL REVERE AND THE SONS OF LIBERTY, FALLOUT TRIGGERS AN ATOMIC EXPLOSION IN FRONT OF THE WHITE HOUSE

IN THE FALLOUT, THE AUTHORITY DISBANDS

In ‘The Authority: Revolution’ #5, the Authority is holding a meeting on the Carrier. They are discussing the possible security breaches that led to the nuclear fallout. Midnighter seeing a vision from future Apollo, decides to resign.

As Midnighter leaves, Jenny Quantum tells him she knows he did something to the Carrier before the fallout. In present day, Jack Hawksmoor make an announcement on the U.S. mass media: The Authority takes full responsibility for the nuclear explosion and disbands.

CHECK OUT THE STORY: IN A FIGHT FOR HUMAN EVOLUTION, SURVIVE OR DIE; WOLVERINE IS ON THE RUN FROM THE BROOD

JENNY QUANTUM UNCOVERS THE GOVERNMENT CONSPIRACY FROM THE INFINITE CITY

In ‘The Authority: Revolution’ #7, after three years, Jenny Quantum is now eight years old and is getting a physical in New Washington. She complains that people keep treating her like a kid She returns home and draws the man she thins is responsible for the Doctor’s death. She visits the Garden of Ancestral Memory where all the previous Doctors go when they die. She finds out that Jeroen (the previous Doctor) and his “successor” are not there.1

As she returns home, she gets a visit from her future fourteen year old self. Jenny can’t identify whether the girl is Jenny Sparks or Jenny Quantum. She does agree to travel with her in order to find out. They travel to Infinite City which houses all the past Jenny Quantum. There, she finds out the man behind the government conspiracy who has been manipulating the Authority. His name is Henry Bendix. As Jenny comes back home, she realizes she is her fourteen year old self. Apollo is startled.

JENNY QUANTUM LEADS THE AUTHORITY IN BATTLE AGAINST HENRY BENDIX

The Authority face the government conspiracy: Henry Bendix used the Rose Tattoo, the Spirit of Murder to seduce and kill the Doctor. In ‘The Authority: Revolution’ #12, Henry Bendix mind controls Midnighter to fight Jenny and the Authority. Jenny faces Midnighter in combat and The Engineer enters Midnighters brain and does micro-surgery with “a virus that wipes out any implant installed after the 20th century.”2

Before Midnighter was freed from mind-control, Bendix made him initiate the Carrier’s Suicide Protocol. Jenny has the current Doctor simulate her death as the Carrier explodes. Bendix attempts to transport Jenny’s naked body onboard only for the Authority to trace his location. A battle ensues at Bendix’s base. During the battle, the Rose Tattoo kisses Jenny who gets her first kiss, though the Doctor battles Rose Tattoo. Apollo decapitates Samson and Midnighter bloodily decapitates Henry Bendix because of Bendix’s government conspiracy. The Doctor turns the Rose Tattoo in the Spirit of Life who joins the Authority. The Authority claims Bendix’s base as their new base.

In ‘The Authority: Revolution’ (2005) #11, Henry Bendix mind controls Midnighter to turn him against the Authority.

5 thoughts on “Image Day: Jenny Quantum Leads The Authority Against The Government Conspiracy Of Harry Bendix”