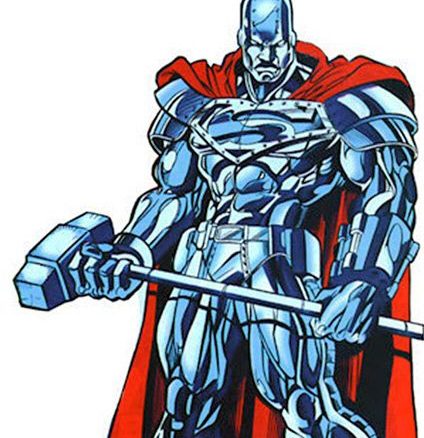 John Henry Irons’ parents died when he was young. In order to achieve power and money, John attended Yale on a sports scholarship before being hired by Amertek Industries.1

As a ballistic expert, he designed hi-tech weapons for a contractor with government ties. When his weapons were used in a war in Qurac, Irons destroyed his prototypes and relocated to Metropolis under Henry Johnson.

During the battle of Metropolis, Irons was saved by Superman who was battling Doomsday. “Henry” told Superman he owed him his life and Superman told him to make it count for something.2

During the “Reign of the Supermen” storyline, Irons found out his weapons called “Toastmasters,” were being sold on the street. Irons decided to take action and designed an armour suit, flight boots, a kinetic hammer, an S-emblem and a cape. He became Steel. People believed he was Superman coming back from death. At the time, there were three other Supermen in Metropolis.2

THE DC HIERARCHY OF INTELLIGENCE