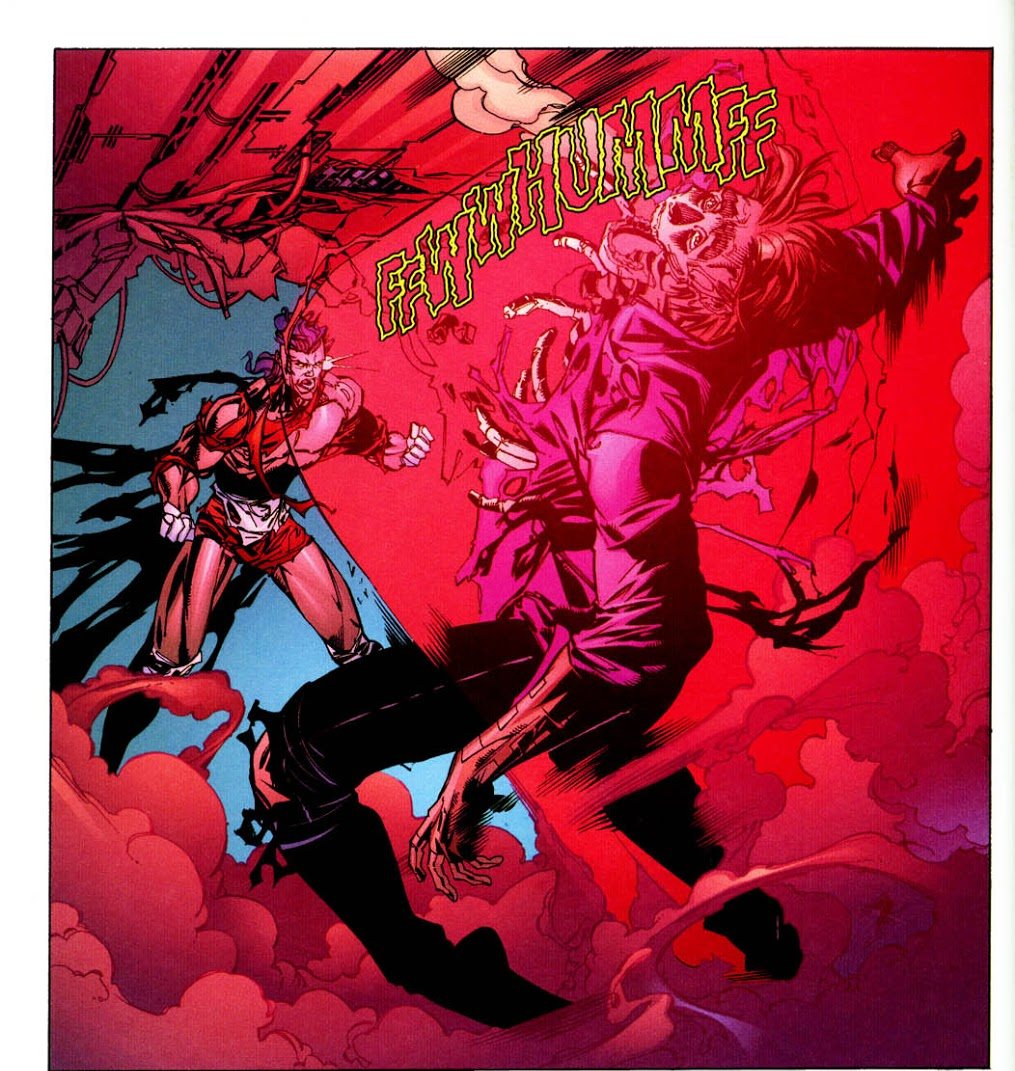 Mister Majestic sees it as the beginning of a disaster. Mister Majestic harbors more lethal methods and incinerates the Zombots with his eye-beams. Ladytron (Maxine) and Condition Red (Max) then decide to go to Max’s local superhero bar called Clark’s Bar. Ladytron sees it as a date though Condition Red disagrees. At the bar, Max notices Vic Lazarr, a supervillain, has deposited a suitcase in the gentleman’s room. Before he can disarm it, it blows up the bar. Max ends up at the hospital.

BACK FROM THE “WILDSTORM RISING,” THE WILDC.A.T.s. ARE QUITTING

At the end of “Wildstorm Rising,” the WildC.A.T.s. flew a Daemonite ship into space in order to stop from exploding. Believing them dead, Mister Majestic and Savant set up a new team. They were transported on Khera where they found the Kherubims had won the Kherubim/Daemonite war. Deeply dissatisfied with Khera’s political affairs, they returned for Earth. In ‘WildC.A.T.s: Covert Actions Teams’ (1997) #29, returning to Earth, Mister Majestic attempted to recruit the members onto his team to fight the gang war, which had also recruited Team One. However, the WildC.A.T.s. original team declined and departed for Gamorra to aid Grifter.

The team consisted of Spartan, Void, Maul, Warblade and Zealot. Two members, Emp and Voodoo, quit the team. A day later, Ladytron checks on Condition Red, but she finds out from the doctor that Condition Red checked himself out of the hospital and quit the team. On Gamorra, the WildC.A.T.s. is under heavy fire. As Spartan manages the controls, they notice an armed troop carrier with the Stormwatch insignia and realize the U.N. has been called in. As they repel the boarders, their craft crashes lower and lower into the ocean. On the shore, Hunter-Killey Daimyo reports to Kaizen Gamorra that his enemies have been downed. Then Void teleports the WildC.A.T.s. on the island.

CHECK OUT THE STORY: MAKING A DEAL WITH MALEBOLGIA, SPAWN IS REBORN.

REUNITED, THE WILDC.A.T.s. ARE ON THE HUNT FOR TAO AT HALO CORPORATIONS

The gang war continues in issues #31-34. In ‘WildC.A.T.s: Covert Action Teams’ (1996) #31, the gang war is all-out and the supervillains have abducted hostages in New York in order to make an ultimatum on the WildC.A.T.s. After Spartan reminds Zealot about his life with her as John Colt, declares his love for her and shares a kiss with her. Then, it is an all-out assault on the Mercs, Overtkill and the supervillain hostage Vic Lazarr.

In WildC.A.T.s: Covert Action Teams’ (1997) #32, during an exchange of fire, Grifter learns that Deathtrap wasn’t responsible for the attack on Clark’s Bar. Ladytron spots Vic Lazarr and goes in pursuit. After interrogating Lazarr, the heroes and villains realize they have been duped. Mister Majestic realizes the one responsible is Tao. His plan was to orchestrate surgical attacks on New York’s underworld, the attack on H.A.R.M.’s funeral in order to bring everyone under his command. Clark’s Bar’s bombing was meant to escalate the gang war between the WildC.A.T.s. and the criminal underworld.