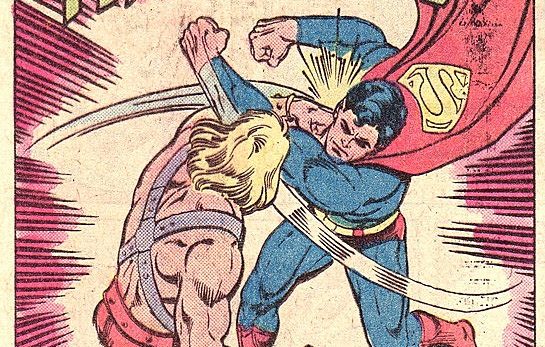 ‘DC Comics Presents’ was a series that featured Superman teaming-up with a different hero each issue. And oh boy, did they hit the ball in the park with this one! This issue is a kind of “What If” first team-up between Superman and He-Man.

We get our answers to what would happen if He-Man ever fought Superman. In their first encounter in DC history, Superman is brought from Earth to Eternia through a dimensional portal created by cosmic storm clouds. Skeletor is at one of his attacks at Castle Greyskull as he possesses half of the Power Sword! He-Man gets summoned by the Goddess and Superman travels to the strange world of Eternia.

This is a classic ’80s story with colors and pencils by Curt Swan. A more vintage art that favors bigger upper bodies and smaller legs. If you are a fan of the artist, this is classic Curt Swan. The fun, the action and the adventure belong in your ’80s He-Man collection.

This story is very reverent of both characters showing what makes each character work in the ’80s: He-Man, Man-At-Arms, Teela and the colorful cast of characters; the Superman/Clark Kent alter ego reminiscent of Christopher Reeve’s comedic tones. Both characters are true to themselves and form a formidable duo. Definitely a favorite story.

A FAN OF AN ACTION FIGURE? CLICK ON “Mattel DC Comics Multiverse Super Friends! Superman Action Figure, 6” BELOW TO PURCHASE ON AMAZON.

Collects ‘Masters Of The Universe’ #1-3.

Paul Kupperberg and George Tuska’s three-issue series ‘Masters of The Universe’ may exemplify He-Man in the ’80s. At its best, He-Man deals with science fiction and fantasy themes comparable to Star Wars and Conan in the decade.

The world of ‘Masters of The Universe’ blends magic and science and figures the fantasy characters heading on a quest in order to save the Goddess. As matter of fact, ‘Masters of The Universe’ stands out because of the straight-forward natures of the quest. In some sense, what makes the comic work for the time period is the cartoony nature of the characters, which seem very well like one-dimensional characters: He-Man, Teela, Stratos and Man-At-Arms fight for good; whereas, Skeletor fights for Evil. The characters do not change.

The foci of the story are action and adventure. The adventure spans Eternia and the universe, from land, to sea, to space, to parallel dimensions. He-Man and co. fight snakes, dragons, demons, Beastmen, extra-dimensional creatures and even Skeletor. The action and the adventure are a thrill and are the parts that work the best in the comic. This is what He-Man is best at.

This is certainly a worthy addition to your He-Man and Masters of The Universe ’80s collection, with a blend of adventure, action, magic, and suspense.

CHECK OUT THE REVIEW: 00s THOR STORYLINES RANKED FROM BEST TO WORST.

“He-Man and The Power Sword” (1982) is the first of four Masters of The Universe miniature storybooks that accompanied the Mattel toyline. The storybook is clearly promotional material and serves as an introduction to He-Man and MoTU.

The storybook reads like a fairy tale. The water color art and the hyper-muscular lines of the characters creates the idea of legend and immortality. He-Man appears as a barbaric warrior who does not fear overwhelming foes and keeps fighting no matter the odds. The pacing is quick and focuses on the action, not the characterization. The plot is simple and straight-forward reminiscent of classic legends.

The storybook is aimed at children’s stories and works as a first introduction to the character.

A FAN OF AN ACTION FIGURE? CLICK ON ‘He-man Masters of the Universe Teela Action Figure‘ BELOW TO PURCHASE ON AMAZON.

7 thoughts on “Reviews: Copper Age He-Man And Masters Of The Universe Storylines Ranked From Best To Good”