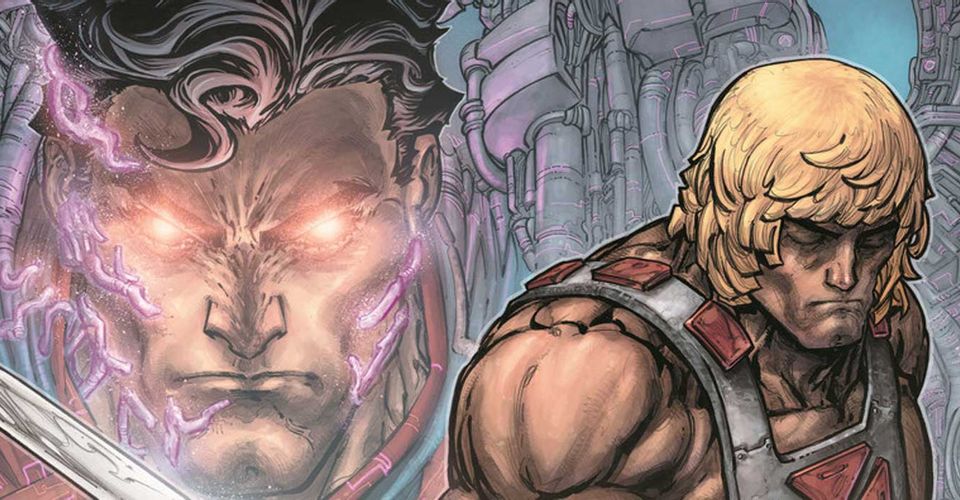 LOOKING TO INVEST IN ARTS & ENTERTAINMENT? PLEASE SUPPORT MY PATREON

INJUSTICE VS MASTERS OF THE UNIVERSE STORY

BEST: INJUSTICE VS MASTERS OF THE UNIVERSE (2019)

Collects Injustice vs Masters of The Universe #1-6.

In 2019, DC Comics published the latest addition to the Injustice: Gods Among Us franchise. With Injustice vs Masters of The Universe, the Injustice story is moved forward in a significant way.

Importantly, He-Man emerges as Superman’s contender for the title of DC’s most powerful hero.

As matter of fact, the end of the comic brings a satisfying conclusion to the series for Superman fans and a great portrayal for the He-Man and MoTU fanbase.

But that is not all. Soon, look forward to He-Man’s guest appearance in Injustice 3. Who wouldn’t love to have the power of Grayskull?

In many respects, Tim Seeley’s dialogue is true to the ancient style of speech. Indeed, it is verbose, long and cryptic. Particularly, this applies to Skeletor and Darkseid. For the most part, the dialogue serves to move the story forward.

Though it also serves as exposition and highlights the characters’ thought process. The large word balloons really fit a bigger size format ideal with the paperback.

In sum, the plot is in fact a Hail Mary in order to save the DC Universe. When Injustice Superman seems to have extinguished hope on Earth, Batman contacts the only hero that may be able to defeat Superman in a slugfest: He-Man.

Also, the Injustice series is set on Earth Twenty-Two and is outside the DC mainstream continuity.

Perhaps, the truest part of the entire series. For the most part, the characters figure as directly taken outside of a video game. Indeed, though complex, the contrast between good and evil is stark. Generally, such caricature may or may not appeal to fans.

Finally, one element that may seem out of character for the fallen hero, despite his evil, is Superman’s attempt to control the Anti-Life Equation.

Finally, the series’ most appealing aspect. True to previous comics, Freddie E. Williams II complements work done on other He-Man comics, such as He-Man/Thundercats. For the most part, the art does service to the character who is its main protagonist.

In fact, He-Man works well in the comic medium as caricatural form of art.

With the new mini-series, the Injustice series breaks new ground. Really, the Superman vs He-Man rivalry started in the New 52 is completed here. Definitely, this storyline is one of the best Injustice stories.

Definitely, collect either the trade paperback or the single issues.

ARE YOU A NEW OR RETURNING VISITOR? WRITE A REVIEW

0 thoughts on “Reviews: ‘Injustice vs Masters of The Universe’ (Superman vs He-Man)”