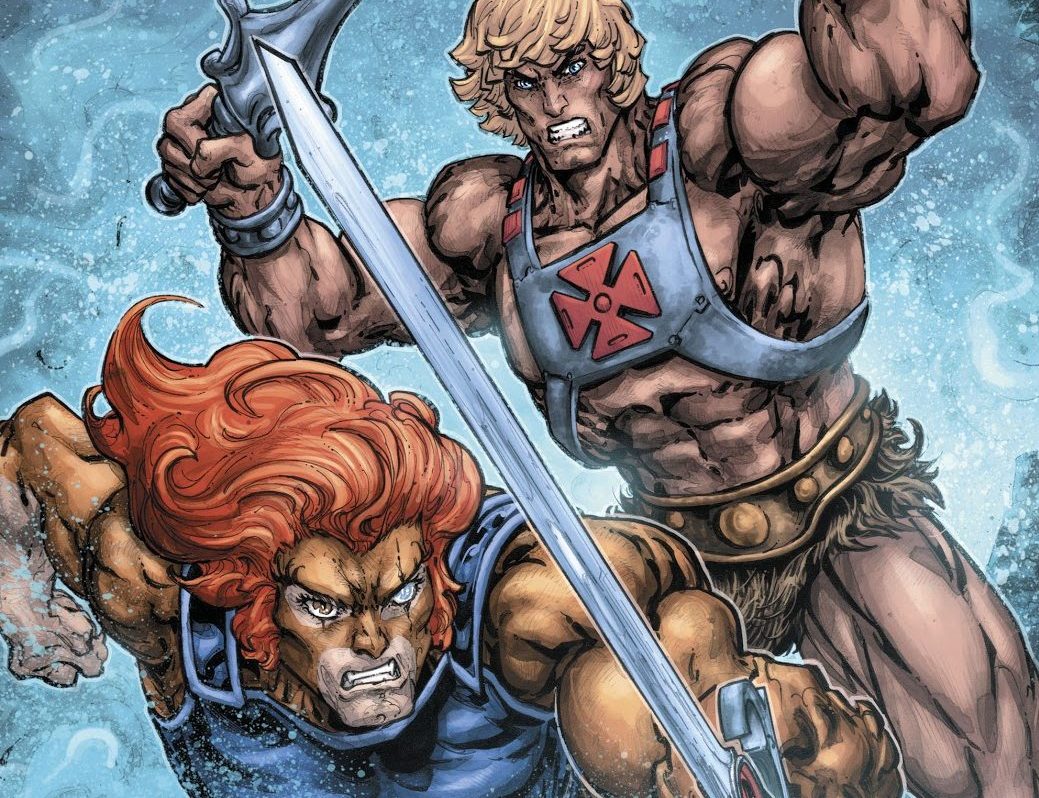 One of the most action-packed He-Man series. Gift this graphic novel to your family and friends on the occasions of competitions and board games. Available on Amazon.

Click on the Amazon product image below to purchase the graphic novel or click to compare affordable prices with Kindle & Comixology.

It’s called Eternia-the homeworld of He-Man and the Masters of the Universe. Here, this legendary hero harnesses the Power of Grayskull to protect his planet against the evil forces of Skeletor, the skull-faced embodiment of evil.

But dimensions away, another evil has set its sights on Eternia’s champion. The menace of Mumm-Ra is spreading, even as his hated rival, Lion-O, is crowned king of the Thundercats. Mumm-Ra knows only one weapon can stand against Lion-O’s unstoppable Sword of Omens: He-Man’s Sword of Power. And he and his merciless minions are prepared to take it by any means necessary.

Now the heroes and villains of two of the greatest adventure sagas ever will join forces in a war for the fate of two worlds. Can He-Man and Lion-O, the Masters and the ThunderCats, put aside their differences and stop the combined power of Skeletor and Mumm-Ra? Or will these two champions of all that is good be forced to clash swords themselves? Collects HE-MAN/THUNDERCATS #1-6.

Astoundingly, “He-Man/Thundercats” is a cultural phenomenon. Since the 1980s, fans have awaited the fateful team-up between He-Man and the Thundercats. In 2017 it arrived and yes, it delivered!

Freddie E. Williams II delivers an action-packed series that takes He-Man and Lion-O across the DC multiverse. In fact, there are cameos from very familiar characters. From the beginning, Skeletor and Mumm-Ra join forces to bring the ultimate threat to Eternia, He-Man and the Masters Of The Universe.

Incredibly, this is an event you do not want to miss. Without a doubt, share this graphic novel to fans of both ’80s cartoon franchises and at board games. Moreover, it is definitely worth its price. And it will leave you wanting for more He-Man! And Lion-O!

In short, the Kindle and Comixology formats are highly recommended.

Importantly, the comic series answers many of the mysteries that have been recurrent in He-Man and Masters Of The Universe. So, what is the true power of the Sword of Power? And what is hidden behind the stone walls of Castle Grayskull? Finally, why does Skeletor continue to fail? Indeed, you will find the answers to these questions in this graphic novel.

In addition, this product has excellent reviews and has 472 global ratings. Moreover, it has an average customer review rating of 4.8 out of 5. In fact, there is a great satisfaction with the product.

In particular, one customer review said: “I was/am a fan of both TV series and have been following the new MOTU comic book series, so I was excited to see them combined.

The story is very good and I enjoyed the artwork. There’s lots of playful banter between the heroes and the bad guys are trying to out-evil each other.

Some of the scenes were a little cheesy…particularly those featuring Skeletor and Mumm-Ra. I would have liked to see She-Ra included but with all the other characters, that could have pushed it over the top.

“I’m a big fan of both of these franchises and I was hopeful that I would enjoy this comic book series. Unfortunately, this series missed the mark in a big way as far as I am concerned. I saw a video review of this series on YouTube and the reviewer mentioned that the series lacks the “good hearted nature” of the original properties.

I think this comment hits the nail on the head. These comic books contain excessive violence and crude humor. Neither of which serve the story in any way. The only positive thing I can really say about this series is that the artwork is pretty cool at times and there are some memorable visuals.”

Overall, this graphic novel was great.

I recommend this graphic novel as the definitive He-Man and Masters Of The Universe DC story.