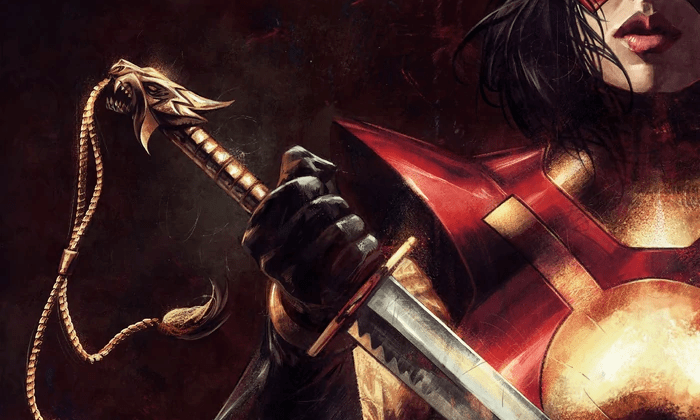 This is My Comics Reading List for September 2022. For anyone just jumping onto comics, we are recommending the following single issue comics as jumping on points into regular subscriptions or continuations. You will not regret it!

MARVEL UNIVERSE GOES OUT WITH A BANG! It all comes down to this! The secret power behind Mot is revealed at last – but with it comes a very personal threat to Ben Grimm! Can the Thing battle his way past the one foe that waits for all of us and snatch victory from the jaws of defeat? And in order to do so, will it mean working hand-in-glove with Doctor Doom?

EARTH’S MOST POWERFUL! The most powerful heroes of the dominant species on the planet, the X-Men rise to protect the world against any threat.

1983. Japan. Tatsu Yamashiro’s life has been taken from her. Her home, her children, her husband are all gone. With nothing left but a burning pain and the sword that stole her family from her, Tatsu begins a long journey of healing, self-discovery, agency, and rebirth. This is the story of Tatsu Yamashiro, the woman known to many as Katana-a hero who became more than the world ever intended for her, ultimately making a family of like-minded Outsiders who rally together for the common good amidst xenophobia and oppression.
The long-awaited miniseries written by Academy Award-winning screenwriter John Ridley (12 Years a Slave, Let It Fall) and beautifully illustrated by Giuseppe Camuncoli and Andrea Cucchi continues to look at the mythology of the DC Universe as seen through the prism of DC Super Heroes who come from traditionally disenfranchised groups.

As Robin and Supergirl race to retrieve the secrets of the Devil Nezha from ancient China, Batman and Superman get more than they bargained for in the present! To save humanity from the fires of the demon, the World’s Finest must go toe-to-toe with the protector of Sector 2814…Hal Jordan.

THE GREAT ESCAPE! Sabretooth and the other exiled mutants have stopped fighting each other long enough to start working together. They might not like one another, but they all want out of the Pit. You’d think their biggest obstacle would be the Professor or Magneto…but no. The greatest obstacle will be one of their own.

KORVAC is on the loose and Tony Stark is on the hook for it. Iron Man and Hellcat were lucky to survive their first encounter with Korvac and his new disciples, but finding him and stopping him is proving an even greater challenge. Tony is reticent to let other hero allies in on the fact that he opened up a giant can of worms all on his own, but it might be a moot point given that Korvac has placed Tony under a very clever and threatening gag order. As Korvac powers down all of New York City in order to try and again go cosmic, Tony’s forced to turn to lesser-known colleagues on the fringe in order to stop him. One advantage he has: Hellcat is hearing things ever since their last encounter with Korvac… Strange things… Things that might overtake her entirely.

“LIGHTNING STRIKES TWICE” Chapter Two. In issue #2, The Flash trains novice speedster August Heart to help protect the people of Central City from the Black Hole, a new breed of rogue with a deadly agenda for the Fastest Men Alive.

The hunt for The Joker is under way, as Jim Gordon heads to a remote part of South America to run down a lead…and comes face-to-face with the Clown Prince of Crime himself! The mystery around A-Day deepens, but not before an attack by the blood-thirsty Sampson family!
And in the Punchline backup story, Punchline has to face off against the Queen of Spades’ new muscle…Orca! At the same time, Bluebird’s investigation at Punchline’s alma mater takes a dark and horrifying turn!

Like Loading...
Category: My Comics Reading List
Tags: Batman/Superman: World's Finest, Iron Man, Kindle & Comixology, Sabretooth, The Flash, The Joker, The Other History Of The DC Universe, The Thing, X-Men

For the new Kindle technology, click on Buy On Amazon to purchase Kindle Paperwhite Signature Edition (32 GB) – With a 6.8″ display, wireless charging, and auto-adjusting front light – Without Lockscreen Ads and become the Kindle reader.