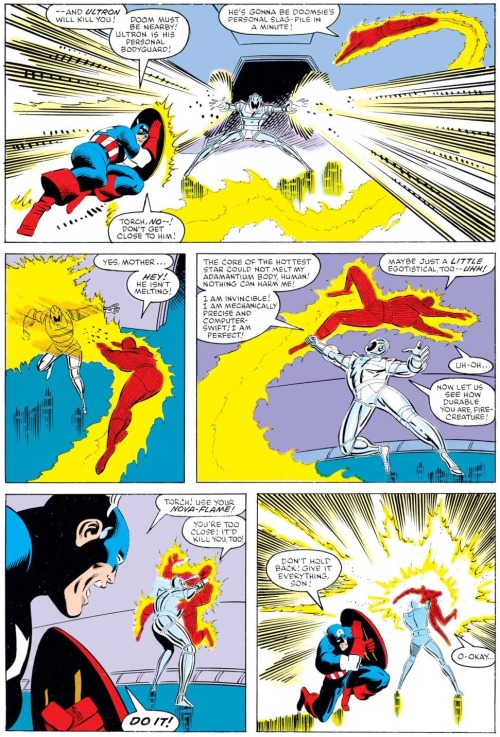 Nova Flame: The Torch refers to his highest, hottest levels of plasma that he can create as his “nova flame.” The exact temperatures that his “nova flame” can attain are not known. At an average rate of expenditure of energy, the Torch can stay aflame for about 16.8 hours. In his younger days, he could only maintain his flame for much briefer periods, and sometimes exhausted it while in combat. He cannot maintain his “nova flame” for as long a time as he can maintain his ordinary flame. The Torch can release all of his body’s stored energy in one intense, omni-directional “nova-burst,” which can reach about 1,000,000 F, and which is similar to the heat-pulse of a nuclear warhead detonation, with an area of total devastation of about 900 feet in diameter and the power of a super nova. (The Torch has claimed that he can destroy a small moon with his nova-flame.) This violent discharge uses his entire reserve of energy (except for the necessary to keep him alive) at once, entirely exhausting his flame power. He generally requires at least 12 hours to recover entirely from such a feat.”

The nova flame is The Human Torch’s most potent super power. It allows him to take on threats of a cosmic scale, such as destroy asteroids!

SUPER FEAT OF THE DAY: THE HUMAN TORCH OVERHEATS ULTRON IN ‘MARVEL SUPERHEROES SECRET WARS’ (1984) #8 WITH THE NOVA FLAME

There is greatness in the human spirit! Everyday, humans are faced with overwhelming odds and triumph through sheer will and the power of humanity. We all have the power, the fire inside, like the nova flame, to shine light on the darkness that dwells in the world! We simply have to work at it! And apply our God-given talents!