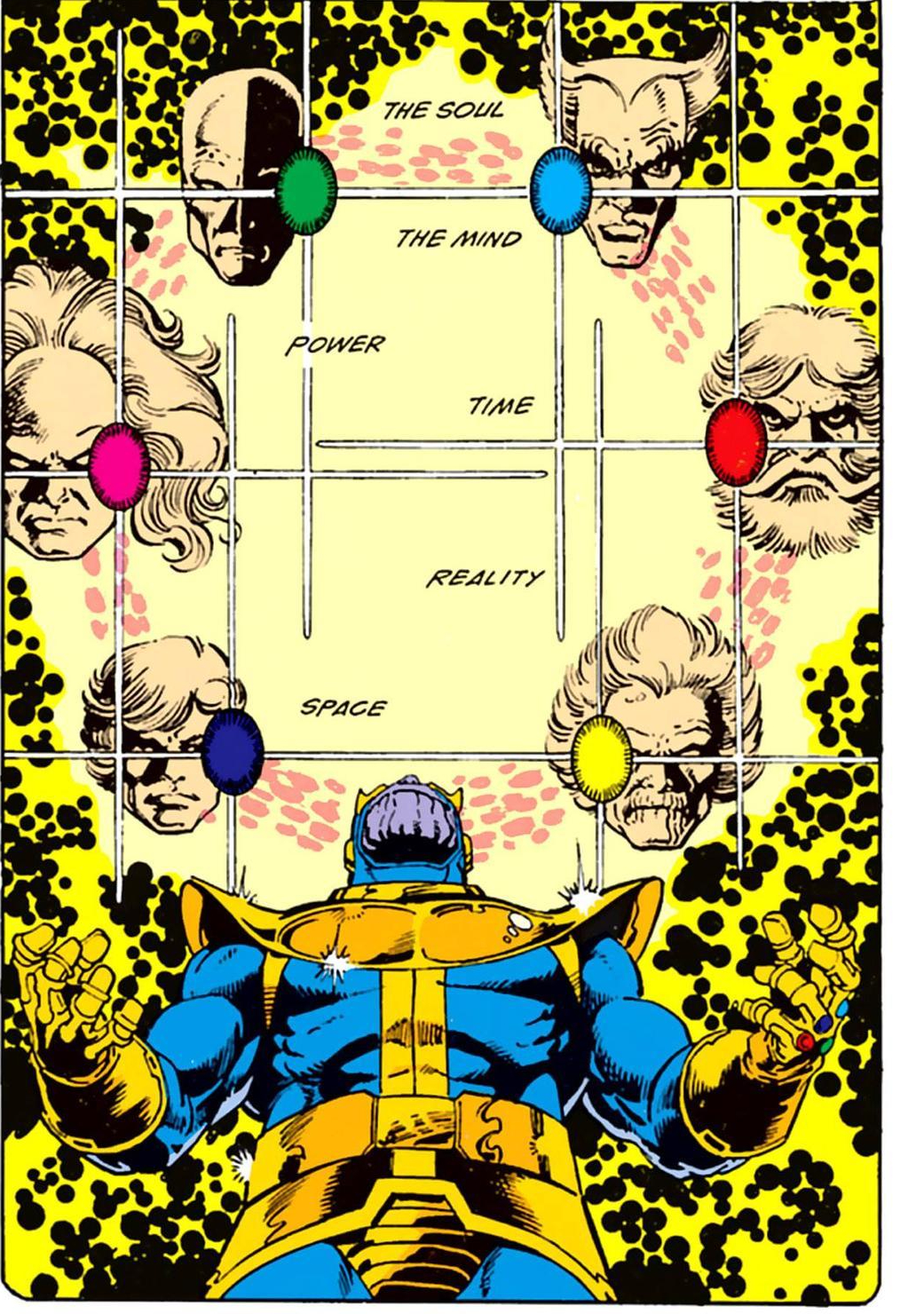 THE INFINITY GEMS ARE ARTIFACTS FROM MARVEL’S PRIMORDIAL UNIVERSE

Today we talk about six primordial super powers. I speak of the Infinity Gems.

The Infinity Gems first appeared in Marvel continuity in ‘Marvel Premiere’ (1972) #2, which featured the first appearance of the Soul Gem and the power of Adam Warlock.

In ‘Infinity Gauntlet’ (1991) #1, upon his resurrection, Thanos gazed at the six Infinity Gems from the Infinity Well in Death’s Realm. He realized the Gems’ true nature and set out to acquire them. They were a remnant from the universe’s creation that in solitude, originally split in six fragments with different primordial super powers: soul, mind, power, time, reality, space.

Let’s look at some battles in comics where other Marvel beings used these primordial super powers.

A FAN OF THANOS AND MARVEL COMICS? SUBSCRIBE TO OUR NEWSLETTER TO RECEIVE THE LATEST POSTS ON YOUR FAVORITE MARVEL HEROES … AND VILLAINS.

IN ‘SILVER SURFER’ (1991) #47, ADAM WARLOCK USES THE SOUL GEM TO RETURN SILVER SURFER AND DRAX THE DESTROYER FROM SOUL WORLD BACK TO THEIR BODIES

In a plot by Thanos, Drax the Destroyer attempts to conquer Soul World. He defeats Gamora. However, Adam Warlock bests him in combat.

Using the primordial super power of the Soul Gem, Adam Warlock sends Silver Surfer and Drax the Destroyer from Soul World back to their bodies.

IN ‘WARLOCK AND THE INFINITY WATCH’ (1993) #13, MOONDRAGON USES THE MIND GEM TO KNOCK OUT THE HULK WITH A MIND BLAST

The two talk things over. As Drax talks about music he finds a closed shop with musical instruments behind the window. Seeing how badly Drax wants them, Hulk breaks the window. Drax retrieves a saxophone. The two engage in friendly banter but soon reach a disagreement when Hulk in trying to be on friendly terms with Drax taps him on the back. Drax responds with a punch!

Moondragon comes in looking for Drax the Destroyer. Moondragon uses the super power of the Mind Gem to knock out Hulk with a mind blast.

IN ‘SHE-HULK’ (2004) #11, TITANIA POWERED BY THE POWER GEM KNOCKS OUT SHE-HULK WHO REVERTS TO HER JEN WALTERS FORM

In ‘She-Hulk’ (2004) #11, She-Hulk is having problems with changing back and forth to her Jen Walters form. Doc Samson arrives at her apartment and takes her to Avengers Mansion.

Titania has received the Power Gem from the Champion of the Universe, whom She-Hulk has bested in combat. She arrives at Avengers Mansion and defeats Doc Samson. Then, she faces She-Hulk.

She-Hulk deals Titania a punch that creates a blast. But Titania blocks it. She-Hulk remarks “it’s…not…possible!”1 She notices the Power Gem on Titania’s forehead. Titania grins then responds with the primordial super power. She responds with a haymaker. Then, she smashes She-Hulk through several stories of a building. She-Hulk lies on the floor and her left hand is seen to revert back to her Jen Walters form.

SUPER FEAT OF THE DAY: IN ‘WARLOCK AND THE INFINITY WATCH’ (1992) #1, THE CONFRONTATION BETWEEN THE LIVING TRIBUNAL AND ADAM WARLOCK WOULD LAY WASTE TO REALITY

8 thoughts on “Super Power: The Six Infinity Gems Are Multiversal Artifacts Created By The Celestials”