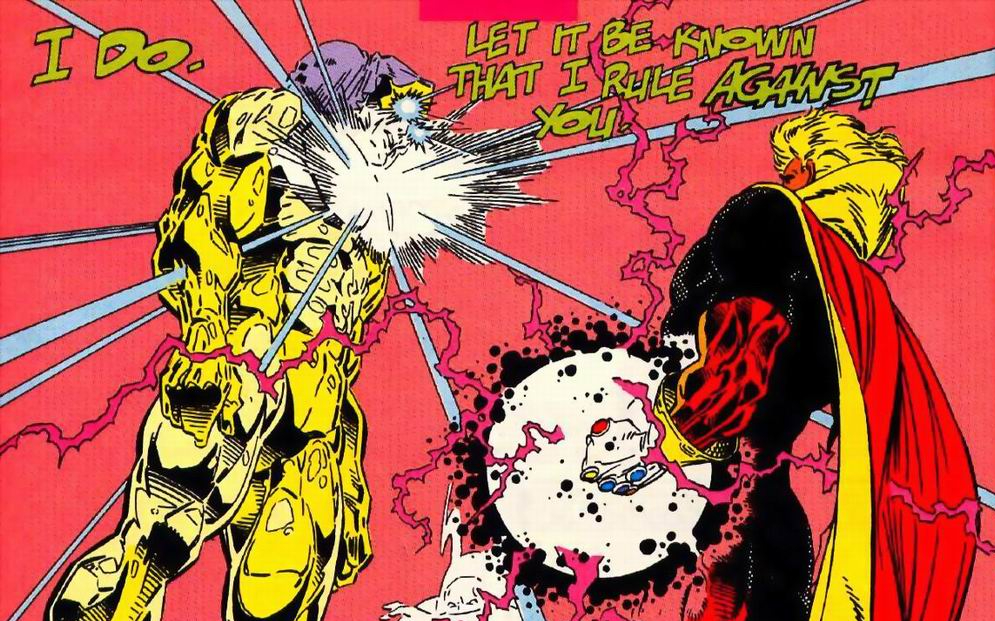 *Our website can officially be translated in 10 different languages. Look for the dropdown menu on the right sidebar with English and the British flag.

In our new hotness, we have The Formidable Warriors List. Here, we cover the greatest battles of a particular character in a comic or series, and how it made it a best-seller. In our new hotness for January, is Adam Warlock in Warlock and The Infinity Watch (1991) #1.

A FAN OF ADAM WARLOCK? CLICK ON WARLOCK & THE INFINITY WATCH #1, NM+, JIM STARLIN, 1992 BELOW TO BUY THE COMIC ON AMAZON.

WHY ADAM WARLOCK IS ON THE FORMIDABLE WARRIORS LIST

Namely, Warlock and the Infinity Watch (1991) #1 is the sequel to the classic Infinity Gauntlet story that skyrocketed Thanos into super-stardom in the Marvel Universe. In a few words, Adam Warlock has led the Marvel Universe against the threat of Thanos.

Now, having successfully defeated Thanos and ended the threat, he has claimed the mantle of the Supreme Being of the Marvel Universe with the Infinity Gauntlet. Really, it does not get better than this!

THE BATTLE THAT SOLD THE RUN

Importantly, the abstract stand-off between Adam Warlock and Living Tribunal sold the run from the beginning. Let’s explain. In the Star Chamber, it’s getting hotter.

There, an assemblage of cosmic entities and abstract level beings are hearing Eternity’s suit against Adam Warlock, the Supreme Being. When Eternity questions Warlock’s supemacy, Adam’s temper fires a powerful blast that fells everyone.

However, with a snap, Living Tribunal restores order.

Then, Eternity presents his case detailing Warlock’s creation, character evolution, his sado-masochistic tendencies as well as his darkest secret. After he has finished his suit, the powerful stand-off of unimaginable might between two omnipotent beings follows!

Certainly, you will have to read the issue to see how it ends. However, the first issue does set the tone for the run and does reveal the creative team’s ambitions. Definitely, the stand-off between Adam Warlock and the Living Tribunal sold fans on the series.

On the footsteps of Infinity Gauntlet, anticipation for the Jim Starlin and Angel Medina run was high. Particularly, the creative team released 42 issues for the series that ran from December 1991 to July 1995.

Though mostly with B-list and C-list characters, the series was among the best sellers in 1992. According to Comichron, Warlock and the Infinity Watch (1991) #1, ranked 41 in sales in December 1991.

Though not one of the most popular comics, it was nonetheless successful in 1992, holding spots in the Top 300 for the year.

BECOME A MEMBER TO VOTE IN THE MIGHTIEST PUNCH!

For the most part, Adam Warlock shares the same physicals as Thanos with the IG. In fact, he possesses Infinite super-strength. At the same time, Eternity’s suit contends his weakness is his mental unstability.

In reality, Eternity is referring to Adam being an artificial being with no experience with human emotion. Despite his power, his emotions let him lose control in the Star Chamber.

However, Adam’s mysticism allows him to overcome Thanos’ power dependency. Thanks to his link to the Soul Gem, Warlock was able to take control of the IG at the end of Infinity Gauntlet.

For that reason, willpower or mind is properly his limitation. And in that sense, he is more formidable with the IG than Thanos. Certainly, his quality opponent in the first issue is Living Tribunal who is a God or Abstract.

During the entire run, Adam Warlock and the Infinity Watch face a list of cosmic enemies such as the Omega, Man-Beast, Thanos and Magus. For the most part, the enemies are either Cosmic Beings or Skyfathers.

Also, the series centers on the protection of the six Infinity Gems which have been bestowed to different guardians in order to protect from their destructive use together.

In addition, there are questions related to the cosmic hierarchy and how Warlock and the Infinity Watch fit in with cosmic entities such as Galactus, Living Tribunal or Eternity.

NEXT FORMIDABLE WARRIOR: HULK WRECKS THE AVENGERS AND THE FANTASTIC FOUR AT THE SAME TIME! ON FEBRUARY 11TH.

2 thoughts on “The Formidable Warriors List: ‘Warlock and The Infinity Watch’ Was A Commercial Success For Marvel’s Cosmic Stories”