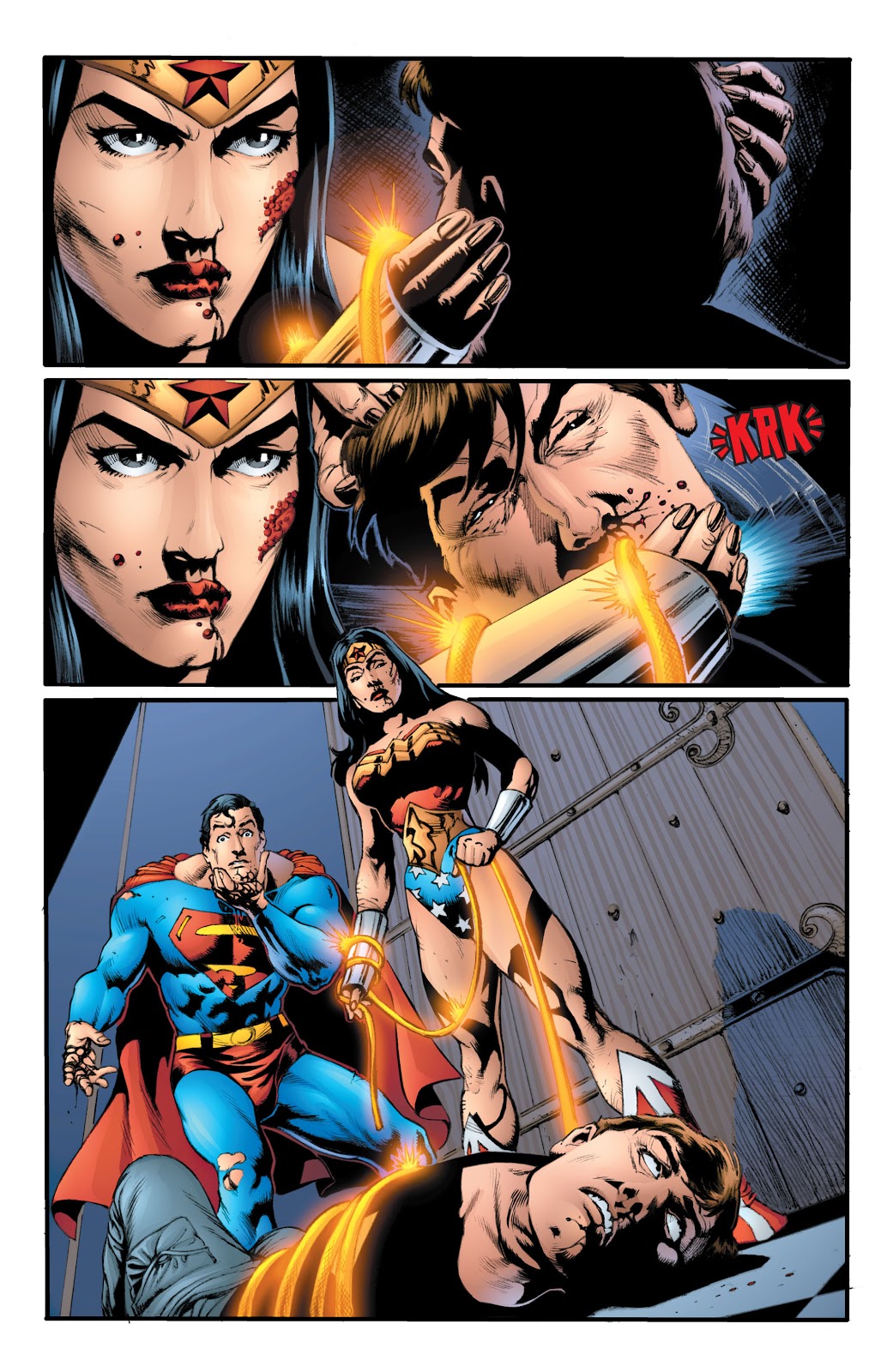 In the events of ‘Superman: Sacrifice’ (2005), Wonder Woman kills Maxwell Lord. In ‘Superman (2005) #219, Clark and Lois are watching a documentary about Superman in bed. The documentary states natural disasters are particularly devastating and beyond human control, then it compares them to Superman. Clark turns off the documentary and wonders if the public sees him as a menace.

He mentions recent events at Puccalpa where he fought an OMAC to a standstill and people died. The event turned the people against him and he wonders why the attacker attacked him. The Disaster Week documentary continues and states that Superman’s heat vision is “off the charts by any of the standard scientific measures.” In between, are scenes of Clark at the Daily Planet talking to Jimmy Olsen. Jimmy mentions that Metropolis may be safer without Superman. At that moment, a beam attacks the Daily Planet.

Asking Jimmy to take cover, Superman takes into action in order to trace the beam to an apartment. Talking to one of the bystanders, Superman finds out the attacker has been using wires and screaming like a crazy person about Superman. Superman meets the super-villain, named Blackrock. He engages Blackrock in combat. Superman attempts to take down Blackrock in a series of attacks then resorts to the use of heat vision.

With an “enough!”, Superman resorts to an uncontrolled blast of heat vision. He pours the energy destroying the camera that Jimmy Olsen’s camerawoman was holding. A gas tank blows and things are catching fire. Even though Blackrock is no longer drawing power from the rock, Superman continues. When Jimmy Olsen shouts to Superman “Superman! He’s done!”, Superman stops. Asking why Blackrock attacked him, Blackrock states it is because he is Superman and an alien. Asking Jimmy how he is, Jimmy says he is alright. However, the woman is scared and flees. The public responds Superman is not human and nothing can hurt him. Superman takes the rock and throws it into the sun.

SUPERMAN IS MIND-CONTROLLED WITH VISIONS OF KILLING HIS ROGUES

In ‘Action Comics (2005) #829, Superman is mind-controlled with visions of killing Brainiac. In the morning, Lois awakes in bed in Metropolis and asks for “Clark.” She thinks about her marriage to Superman and says she does not understand him. She talks about his vision powers and how awe-inspiring they are. On the phone, Lois says she is worried about Clark because he did not come home. She found it new that Clark looked at her with doubt.

Elsewhere, Clark and Jimmy Olsen are on the scene on the latest Blackrock incident. Clark is happy no one was seriously injured. Jimmy asked the Daily Planet’s science writers to estimate peak temperatures and it seems it reached to about 1000 oC of glass melting. Clark asks Jimmy if Superman over-reacted and Jimmy is unsure. Jimmy does state that Superman used to save the nuclear option to big-bads like Doomsday and Gog and not second-raters like Blackrock. Clark heads back to the Daily Planet and asks to see Lois Lane. Peaking through the walls with his X-ray vision, he see Brainiac flirting with Lois Lane. Clark storms through the door.

Clark attempts to reassure Lois that he is here to save her. Lois tells Clark Brainiac is a friend. Lois says Clark is scaring her. Superman takes Lois away and activates the security protocols at their apartment. At the Fortress of Solitude, he is hunting down Brainiac with the Superman robot. Brainiac takes over the Superman robot and Superman quickly defeats him. Brainiac guides Superman to his location seven miles beneath the ocean in the Marianas Trench. It is the Brainiac Skull Ship. Superman engages Brainiac in combat. Brainiac states Lois he has looked into Lois’ mind and she does not know whether to call him Superman or Clark.

He states the problem is Superman is hiding from the truth: he is pretending to owe allegiance to a world he does not belong to. He is an alien. Brainiac states the humans fear Superman. Superman says “wrong!” and breaches the ship’s hull. Superman says he can withstand 16000 psi, but wonders if Brainiac can. At that moment, Brainiac shows Perry, Lana, Jimmy and Lois bottled up. Superman can’t save them and they are submerged by the waters. Then, Superman decides to kill Brainiac in order to avenge them. At that moment, a bright light erupts. Superman is at the Fortress of Solitude, kneeling, with blood in his hands and the Superman robot at his side. Then, the Justice League arrives.

In ‘Adventures of Superman’ (2005) #642, Superman realizes his visions were a mind control that resulted in him nearly killing Batman. Superman is on the Justice League Watchtower on the moon, inspecting Batman’s bruised. He recognized the thumbprints on Batman’s neck and realizes they are his. However, he refuses to believe it. Wonder Woman who had been standing behind Superman for thirty minutes comes into the room to operate the purple ray on Bruce.

Superman says he thought he was fighting Ruin. Following a mind scan to heal the implanted psychotic episode in Superman’s mind, it is found that Maxwell Lord is at the origin of the mind control. Wonder Woman teleports away Batman to safety. As the Justice League prepares to place Superman in a teleportation loop. Superman sensing their menace, attacks.

CHECK OUT THE STORY: IN THE ‘REIGN OF THE SUPERMEN’ STORYLINE, CYBORG SUPERMAN SINISTERLY DESTROYS COAST CITY.

INTERESTED IN WONDER WOMAN? CLICK ON Superman: Sacrifice (The OMAC Project) (Infinite Crisis) BELOW TO BUY THE PAPERBACK ON AMAZON.

Superman fires heat vision at Wonder Woman who can barely get her bracelets up. Then, he takes her to the sun. As they approach the sun, Wonder Woman takes out some Kryptonite. However, Superman punches her back to Earth. She blacks out for an instant. Wonder Woman crash lands in Wyoming. As she comes out of the crater, Superman freezes her. As Superman listens to find Wonder Woman, she hits his ears with her bracelets causing a concussion. Then, the turn of the battle. Though Superman manages to break Wonder Woman’s wrist, she uses birds as a distraction in order to slow him down, get away and find Maxwell Lord.