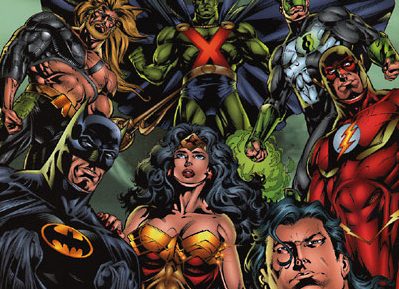 IN TEAMS, SQUADS AND LEAGUES

What makes the JLA work is that they are a modern pantheon of gods. Literally! Grant Morrison gave us a beefed-up version of superheroes that continually outdid previous prowesses such as: Wally’s Infinite Mass Punch, Martian Manhunter figuring out Joker’s mind, Superman absorbing Mageddon’s anti-sunlight or even Batman going toe to toe against Prometheus.

Really, the JLA are DC’s premiere superhero team. In fact, they are the best and take on threats of any scale: From J’onn’s apparent death, the rise of the Injustice Gang, the alternate future of the ALE, to Superman remaining a symbol of hope in a White Martian invasion.

Though their chemistry is definitely legendary, let’s list how the individual members rank in formidability.

Generally, formidability is the ability to compete, match and defeat a foe despite overwhelming odds. Usually, formidability indicates a warrior’s ability to defeat a stronger, more powerful and more resourceful enemy. For this reason, it is almost interchangeable with the Fighting Skills Level. For example, this explains why Batman is able to defeat Killer Croc or Bane who are in fact stronger or more powerful. Using tactics, training, technology, resources and intel, Batman is usually able to take on more powerful opponents.

Before we rank the JLA Big Seven, let’s list some rules.

Generally, Wonder Woman is THE best warrior in the universe. In fact, the best melee fighter in DC. In addition, unlike the other powerhouses in the DC Universe, she has no discernible weaknesses. Though, she has weaknesses to piercing weapons such as bullets and arrows. At the same time, it must be said that her powers are magical in nature, which means she ultimately depends on the Olympian gods.

Incredibly, she has stood up above her strength class against Superman, Darkseid and Doomsday. Furthermore, she consistently fights quality opponents like Ares, Genocide, First Born, The Olympian. Dark Nights: Death Metal reveals her greatest strength is the ability to see the truth.

However, where Wonder Woman ranks lower is on leadership and morals. At one point, she was cast out of Paradise Island for not bringing peace to Man’s World. Moreover, her warrior code has often caused other heroes to question her morals. For example, see Superman: Sacrifice.

Personally, Kyle Rayner is among my favorites at DC. Indeed, the Last Green Lantern is one of the best characters in recent memory. What separates Kyle as a character, is the combination of art and superheroing. When you bring together a struggling artist and the most powerful weapon powered by imagination and will, you get… god-like power!

When Kyle merged with the Ion Entity, Green Lantern became a god-like being capable of creation, nigh-omniscience, nigh-omnipresence. Really, Kyle is among the most likable heroes and the fact that he continued to want a normal life, is a testament to his awesomeness!

Generally, Green Lantern has faced tough competition from Mongul, Parallax, contained Solaris going supernova, fought the Monitors, the New Gods Takion and Kalibak, busted through the Manhunters and battled Monarch a time-travelling villain. With the yellow impurity gone, Kyle is only limited by his willpower. Indeed, something he has plenty of.

Importantly, Superman is the most powerful DC hero. However, Superman’s greatest strength is his great humanity. When it comes down to limitations, opponents have often used a long list of weakness exploitation. Seldom, however, do they use his humanity in battle.

Perhaps, due to his overwhelming power and strength. In comparison to other heroes, the Man of Steel consistently faces tough competition. Many times, Superman faces foes above his Strength Class. Such as Dominus, Imperiex, Brainiac-13, Mandrakk, World Forger and True Form Darkseid.

Really, Superman’s weakness to kryptonite is well-known. As Thought Robot, Superman is second to the Monitor Mind The Overvoid in power. Though, the Cosmic Armor grants him Boundless Strength. Properly speaking, Superman belongs to the Infinite Class of Super Strength.

Recently, Wally West has become the best Flash among fans. And we can see why: He is relatable, a team-player, a great leader and one of the best graduates from the Teen Titans. Since Crisis on Infinite Earths, Wally has grown on fans and today sports a large fanbase. Though, that success has not necessarily translated to live-action.

Formidability-wise, Flash has no real weaknesses but has limitations. In fact, the Speed Force grants him the potential for infinite kinetic energy. Since Flash’s powers are physical, they can be altered by advanced weaponry or devices. Namely, one of the Flash’s rogues, the Thinker, once depowered Flash and transported him to Wonderland. Generally, Flash is limited by his durability being a metahuman. Though, his super strength potential is Infinite.

Famously, Batman once figured out the Flash’s weakness. When Ra’s Al Ghul stole Batman’s contingency plans against the JLA, he specifically targeted their weaknesses. In order to take down Flash, attach an electrostrobe to his spine to trigger seizures at super speed. Ouch! Nevertheless, Flash is generally affected by universal or multiversal forces that either reduce his kinetic energy or his connection to the Speed Force. Effectively depowering him.

INTERESTED IN JLA? CLICK ON JLA: The Deluxe Edition, Vol. 1 BELOW TO BUY THE PAPERBACK COMIC ON AMAZON.

Generally, most comic battle boards rank Aquaman as a mid-tier in strength level. In some respects, the rating is correct. Indeed, the problem is that he has shown to match powerful energy-based metahumans such as Black Manta and Ocean Master. At the same time, he has out-performed team-busters and champions such as the OMAC and Despero.

Formidability-wise, Aquaman’s only weakness is water deprivation. However, with the water bearer hand, he is able to overcome it. At the same time, water is itself a power dependency limitation since Orin depends on it to survive. Nonetheless, despite his reputation, Aquaman is a powerhouse at DC comics.

Indeed, his combination of brutality, resources, intelligence, strength, energy projection and telepathy is unmatched. In addition, the water is his natural element. In many cases, in underwater battles, he can call upon sea life. Which is a sizable part of all species on Earth.

At this time, Martian Manhunter still gets no respect from writers and editors. Though the Fernus story arc did reveal the Burning Martians’ terrifying potential. At his highest potential, J’onn J’onnz is a Cosmic Being. In some respects, DC comics has yet to capitalize on J’onn’s power-set to tell long-lasting stories.

Recently, in Justice League: Last Ride, J’onn J’onnz went Super Saiyan in order to defeat Darkseid. Definitely, a power-up for the Green Martian. Perhaps, an indication that J’onn has finally put aside his fire weakness. At the same time, Martian Manhunter may challenge Superman as the most powerful hero in the DC Universe.

Only time will tell if the editorial team at DC finally raises his stock.

Why is Batman’s score so low? Let’s explain. In reality, Batman‘s formidability is about the intangibles. We are talking about resources, discipline, preparation, contingency plans, detective work with peak human conditioning and fighting skills. Though we can definitely rate these attributes, it is clear that the Dark Knight’s abilities rate him as a metahuman at his highest potential.

Though Batman does incredibly alone, his particular skills allow him to excel in teams. Indeed, his stealth and escapology are excellent for recon as the other powerhouses take the brunt of the damage. Furthermore, his expertise in science, psychology, criminology and mysticism make him the JLA’s best tactical leader.

However, being a low-level metahuman, the Dark Knight definitely suffers from low competition. His foes often include Bane, Killer Croc, Joker or even Prometheus. Nonetheless, as an essential part of the JLA, he has stood up to foes above his strength class: Superman, Green Lantern, Supergirl or even Darkseid. Finally, Batman may be the Bat-God or Prep-Master in any universe! And that is saying something.

BATTLES OF THE WEEK Celebrating Masters of the Universe Day on vacation? For the full […]