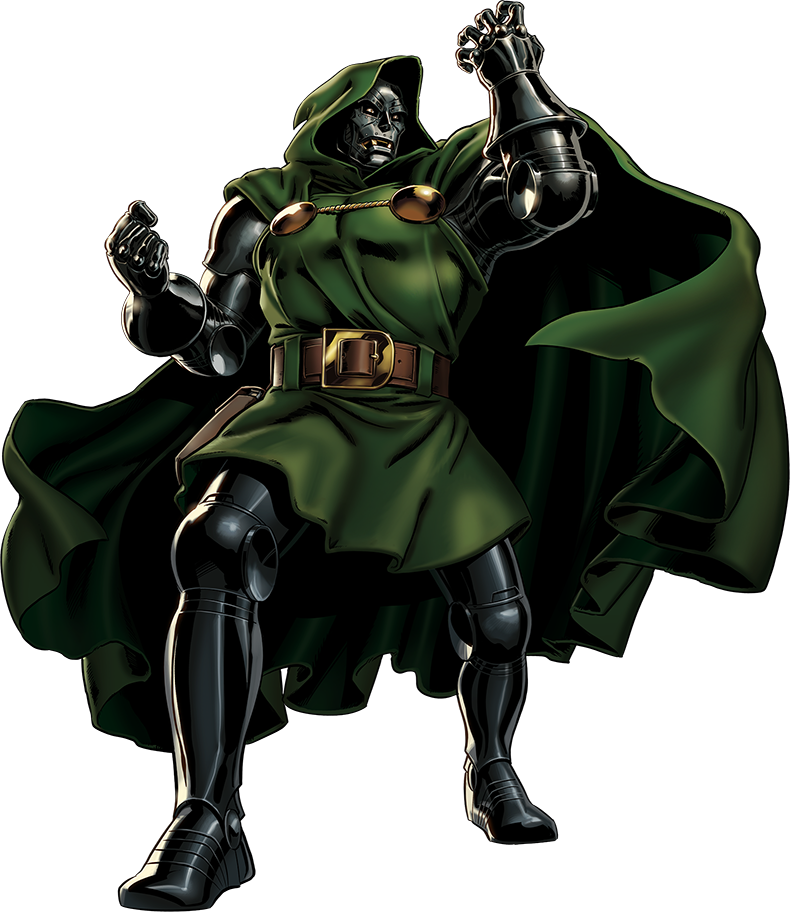 Victor von Doom was born in a Romani camp outside Haasenstadt, Latveria.[34] His mother, Cynthia, was killed in a bargain with Mephisto that went wrong. Despite his father’s attempts to care for her, a noblewoman died and Werner von Doom fled with a young Victor on a cold winter’s night. Victor survived the cold, but unfortunately his father did not.[39] Doom sought to increase his knowledge of both science and magic in order to rescue his mother,[40] whose death he blamed on Mephisto. In his youth, Victor fell in love with a woman named Valeria, but she resisted his advances.[41]

The State University in Hegeman, New York offered Victor a scholarship. While attending classes there, he met Reed Richards and Ben Grimm for the first time.[38][40] They developed a dislike for each other, leading to Reed Richards commiting the first prank he had ever pulled, changing Victor’s last name on a trophy to “Doof.”[18] Doom became obsessed with developing a machine that could project the astral form of a being into other dimensions, seeing it as a way to free his mother’s soul from Mephisto’s clutches. Reed pointed out a flaw in Doom’s calculations, but Doom arrogantly ignored his warnings, feeling Reed was trying to upstage him, likely due to their dislike for each other. The machine exploded, scarring Doom’s face. He was soon expelled for conducting unethical experiments. From then on, he blamed Reed Richards for the destruction of his face as well as his expulsion.[38][40]

Disgraced and bitter, Doom traveled the world. Eventually he came upon a small Tibetan village of monks who assisted him in creating a suit of armor. He returned to his homeland of Latveria to overthrow the leader and declare himself king. He then began to use his country’s resources in order to further his plans of world domination. These schemes led Doom into conflict with the Fantastic Four on many occasions, as well as many other superheroes.[40]